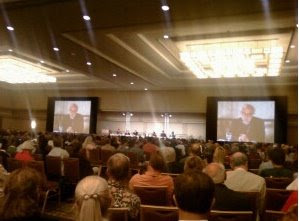 Okay, so it starts with everyone rising to their feet and shouting to give Katharine Jefferts Schori a standing ovation. She now is talking about being charged with caring for the orphans in our midst ... how we dispose of garbage. "We are beginning to realize that each of these acts are more consequential than we ever imagined."

She continues to talk about climate change. "We've overlooked the greed that precipitated this crisis," she says about the current economic crisis. "We've ignored the abundance that God has blessed us ... indeed there is very little health in us."

The vision of the feast, wisdom's table, she talks of as being hope. She now is introducing Rowan Williams with his official biography. No personal note, just "share a taste of wisdom's fare," and the crowd offers him a standing ovation, but no shouting this time.

Rowan Williams has now come to the podium to talk about the current economic crisis. "As providence would have it," Rowan says, referring to the publication of Pope Benedict's own publication on the same topic, Love in Truth, and quotes the Pope. "Truth needs to be sought, found, and express in ... charity ... and charity needs to be practiced in the light of truth."

What we've seen in our world in the last six to nine months is a crisis of truthfulness. We have suddenly discovered that we've been lying to ourselves, says Rowan Williams.

1. Crisis in Ordinary Truthfulness and Trustworthiness - breakdown in truth telling in our financial world. Now will say openly, a steady and drastic erosion of the mutual values of trust. Our word has not been our bond, we have learned to tolerate high levels of evasion and anti-relational practices.

3. We have lied to ourselves about the nature of our relations with one another - one's profit can be isolated from the good of the human family, denied Ubuntu.

And so the task before us is not simply to restore financial stability, get our financial life "back to normal," there is no normal any longer. (NOTE: Rowan is speaking almost as though he has no notes, as though he's just talking to us, only glancing down from time to time at his notes, otherwise he keeps eye contact with the audience." 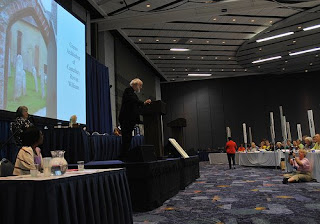 Looking at the positive side of the three negatives above.

1. We begin with truth in our dealings with one another, transparency, building a relationship. Trust doesn't have simply because someone says, "Trust me," in fact, the opposite. Trust happens almost when you're not noticing it. When you know the quality of the person you are dealing with - that takes time. We need to build a culture of patience if we're going to build a culture of transparency. The Anglican family needs to hear this as much as the financial family, we need to get our own house in order, Rowan says.

2. Truth about the world we live in - in our lifestyle, policies, we should be showing that profound respectfulness of our limits. So much of the rhetoric we live in encourages us to live in a world of fantasy. The world we actually inhabit cannot indefinitely tolerate what we were are doing. We show that truth by our lifestyle recognizing our limits. To be an embodied person in a material creation - not to float a mile and half above the surface.

3. Truth telling of all our activities and decisions involve risk - profit does not come without a cost. Who carries the greater part of that trust? Truth telling about the common good. We can so easily assume that what's good for us is what's good for individuals. Quotes Charles Taylor of Canada, there are many goods that are nothing if they are not social, if they are not shared. It's not the sum total about everyone feeling good, mutual attention. If we can show in our common life the habits of mutual attention, what can be done doesn't have to be done because there are other goods to be considered we'll be sharing something significant.

The differences between prices and prices really charged, because you have to live with the consequences that could destroy your common life if you didn't know you had to live with other people. We have like gated communities with our relationships.

We have to factor in to our economic dealings that preserves living with other people with full active partners we respect.

These principles emerged in a seminar between representatives of different religious communities. They were able to identify those areas that all people of faith could rally. There is something about the Christian doctrine about the body of Christ, that third recognition about the common good - we are made so that what is given to us should be given in turn. Each one of us depends on one another. In that way, we are the active presence of Jesus Christ, the eternal Son of God in the world.

There is a sum of our early Anglican forebearers about the connection of what we believe about God and Jesus in our presence, and what we do with one another. How can this be fleshed out with our economic activity?

This is painted with quite a broad brush. How do we put more specific coloring in it? Challenged on this, Rowan thought there were five points to bear in mind in thinking of our own behavior, what we recommend to our governments and financial institution.

1. The need to move away from the model of economics away from generating money to trust, we need to define what we mean by wealth. What do we mean by wealth? Well being, not simply what we have in the bank. Well being. Being at home with one another and our Maker. Can we cope with this redefinition?

2. Economic calculations should include clear environmental cost. The economy is a wholly owned subsidiary of the environment. It has limits. There must be robust denial that that economic concerns are side concerns.

3. We've been through an era where democratic governments have been undermined by the flow of capital. What is the role of government and international business. A small country can be destabilized by an international financial concern overnight. For example, in wages and working conditions. Cheap labor havens, cheap tax havens - need to look at. What is the healthy relationships between government and finance?

4. IMF, the World Bank, G8 and G20 countries - how are they reconceived? How do we provide safety nets? Playing field so far from being level.

5. Most of the developed nations have short-term policies to kick-start economy. And many have said it's all very well as a start, but not much of a longterm policy. What does the real economy have to do? The ambulance business of bailouts - what do we want for a longterm productive economy for well being and wealth.

We've had, Rowan says, a great confidence in the government and governing system of the United Kingdom, producing cynicism. Skepticism is good - but cynicism is a very bad thing, assuming the answers will be untruthful. There must be a way around that ingrained mistrust. Sees this as having to do with the revival of civil institutions, microcredit, Habitat for Humanity - far more important in the next few years, the micro-economy. That is the shape of a healthy future.

We shouldn't look to government to provide the answer - but looking to what we can do. The Church is well-placed to do that all around the world.

At Lambeth Palace, finds themselves to cooperate with small scale church-based initiatives, they are on the ground, they are trusted, they deliver. Best allies found in faith communities.

It's about what we can do.

Further message to business enterprises - ask them to factor in commitment to and work with local communities. Steven Green head of the bank and Anglican priest has recently published a book on "Value." The difference it makes to moral when employees have been actively encouraged to build relationships of trust with local community and business.

Made in the image of God - it's not a static thing, it's to say that in the processes of growing and interacting, the life of God is made manifest. To grow in communion, liberty in relation - that's what human beings are for. To restore that image is what Christ died and rose for. The Holy Spirit is for in the economy of salvation. That vision of the economy of salvation of human beings growing together in liberty. We have the capacity to speak to it.
Posted by Unknown at 9:22 PM

I understand that you are blogging as she speaks, but I am thinking you should rephrase
"She now is talking about being charged with caring for the orphans in our midst, how we dispose of garbage."
It creates the very unfortunate idea that orphans are garbage to be disposed of.

The title of the post is most appropriate. Thank you, M.A.

When I read the opening remarks from yesterday, it seemed as if this convention is one of a politically correct social organization. But, true charity, selfless giving, is based on our belief in the Father, Son, and Holy Spirit. Acts of charity do not make us Christians; it is trust and our belief in Jesus Christ as Lord.

Without God, what is right and what is wrong is pretty much whatever you want it to be.

It's really sad when a clever man speaks about things outside of his area of competence. I'm reminded of the late Linus Pauling.

I am open to the Holy Spirit. It is obvious to me that the Holy Spirit is very alive at this convention. As Bishop Chane put it so well, "Prayer without action is simply poetry." WE are HIS arms, legs and being on earth. We have 2 commandments to fulfill:
1) Love GOD with ALL of our hearts and minds.
2) Love our neighbor as ourself.

Breaking up the church is actually doing the opposite. We need to get back to serving HIM....and not serving our earthly egos.

Suing to take away the property of other Christians who disagree with you is not Charity - it is greed. It is not loving our neighbors as ourselves. It is ignoring the abundance you already have and grabbing for more. When will the Episcopal church "walk the walk" and not just "talk the talk"?

Mr. Chane should know, that's for sure. That's why many call ECUSA "liturgical unitarianism."

Phil, the proper form of reference and address is BISHOP Chane or John Chane. What is gained by the cheap and hostile affectation of calling the bishop of Washington MISTER?

I see that usage all over the so-called "orthodox" blogs. It is a form of bad manners and boorish behavior in print.