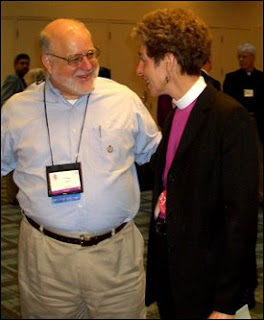 George Conger asks a question to Bishop Stacy Sauls of the Diocese of Lexington on his opinion on what Archbishop Rowan Williams said yesterday in his teaching at the morning Eucharist. "I think the Archbishop began as I recall that homily by trying to put to rest reading into anything into anything else he might say. He began with an affirmation of his personal affection and belief in the Episcopal Church," says Bishop Sauls. "He thought that was true of the communion as well. I heard him say as well that he has anxiety that the convention take action that would lead to further division in the life in the communion."

A question is later asked whether this anxiety will influence the legislation facing The Episcopal Church. "I hope that anyone will be heard, but I don't know if it will have any affect," said Bishop Gary Lillibridge of the Diocese of West Texas. "Over the next few days we're going to try to figure out how as a church to bear one another's burdens."

When asked whether there is concern about The Episcopal Church accepting the consequences of General Convention possibly endorsing same sex unions or the consecration of more partnered gay bishops, Bishop Sauls says that Episcopal Church is ready to accept the consequences. He also made a point to note that the Anglican Church in North America is not a province.
Posted by Unknown at 11:55 AM

Mr. Sauls knows full well there aren't going to be any consequences, as do we all - unfortunately.

I disagree, Phil. One consequence is further erosion in Rowan's position. (Yes, it can get even worse.) Rowan has consistently used his position to protect the liberals. Further erosions of traditional power structures - the "instruments" lead to ascendancy of new authority, e.g., the FCA.

Another huge consequence of more Gene's running around whining about gay rights is further diocesan decline. Even though the diocese of Lexington has fallen far, there is still a lot further it can fall.

"He also made a point to note that the Anglican Church in North America is not a province."

It technically may not be a province, however it does create a centre to which all sorts of folks may find a home. In time it may become a province, however if warmth of community, common vision, and of course vital mission is experienced, it will drawn many orthodox from various mainline and soft evangelical background. Anglicanism, as an ethos, rather than a legal entity does have an amazing capacity to create a broad cohesion across theological backgrounds. This is what Progressives should fear most. While they might maintain the legal entity, this new community may just be handed the mantle of classical Anglican genius.

Time will tell. If they hold onto their anger, they will soon implode, however I sense that there has been an acceptance of the divorce and now many are moving on as a new community whether they are legally accepted or not. Remember Methodism ... mission eventually trumps legality.