Delegates to the Daughters of the King Triennial defeat all resolutions to change bylaws; current bylaws remain in place unchanged

After all the proposed resolutions were defeated, a Roman Catholic member of the Order petitioned Triennial to re-seat the delegates that were unseated this morning. The Episcopal Triennial delegates then voted to reinstate the non-Episcopalian delegates and they were seated.

Witnesses in the room report that the National Chaplain, the Rt. Rev'd John W. Howe, Bishop of Central Florida told the delegates when the voting was over for the day that there was, indeed, work to be done over the next three years. It is reported that in his prayer of grace for the meal this evening, he prayed that what comes out of our mouths will be as sweet as what goes in. May it be so. To God be the glory. 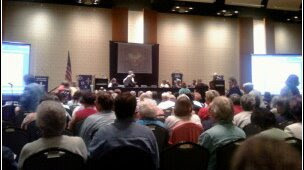 SATURDAY UPDATE: Learned when I arrived today in Anaheim that the only section of the bylaws that were even addressed yesterday was the Article on membership. That debate spanned a good portion of the day on Friday and none of the other amendments were addressed on other issues. As stated earlier, at the end of the day and through much debate - some of it quite painful - the DOK Triennial voted down all the amendments and the bylaws in place that include all the members of the Order remain unchanged. The non-Episcopalian members were reseated and the Triennial continued into Saturday.

The same thing that happened on Friday happened today as well. All the amendments were voted down (those proposed by the national council and those proposed by the Episcopal Community) and so the bylaws remain unchanged. There was also a new council elected and the overwhelming majority of the members are said to favor full inclusion of all the membership, including Episcopalians, Anglicans, Roman Catholics, and Lutherans. They will be electing a new national president shortly.

Tonight is the traditional banquet, which will be held here in Anaheim. Tomorrow morning will be the closing banquet with Bishop Howe preaching.

Thank you for the Tweet today and all of the other calls to prayer. Glory to God in the highest... and prayers for His help as DOK goes forward.

Praise God from Whom all blessings flow!

I have been following this on your blog BB and thank God that it has turned out as it has.

I salute the DOK!

and unity won out.

Thank you for raising the level of awareness to this scheme.

Thznk you, Mary, for reporting this. It seems unfair that non-Episcopal members were not allowed voice on matters that directly affected them. Praise God that the Episcopalian women showed the love toward their sisters in Christ. I am glad that the group wanting to purify the DOK lost. The province VII president had assured me that the majority of Daughters didn't feel the animosity of a few. I am so glad she was right. I can finally breathe easier. I was truly afraid that the DOK was going to expell the Anglicans. I am so glad that I was wrong.

As a 25 year Daughter and the president of an Anglican chapter that just celebrated one year in Prayer and Service, I only have this to offer:

For the Unity of God's People.
O God, the Father of our Lord Jesus Christ, our only Saviour, the Prince of Peace; Give us grace seriously to lay to heart the great dangers we are in by our unhappy divisions. Take away all hatred and prejudice, and whatsoever else may hinder us from godly union and concord: that as there is but one Body and one Spirit, and one hope of our calling, one Lord, one Faith, one Baptism, one God and Father of us all, so we may be all of one heart and of one soul, united in one holy bond of truth and peace, of faith and charity, and may with one mind and one mouth glorify thee; through Jesus Christ our Lord. Amen.
-1928 BCP