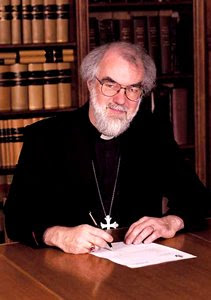 Calling this the "most difficult and fraught moment," the Bishop of Durham, Tom Wright, in his talk to the Fulcrum Conference yesterday in London on "Conflict and Covenant in the Bible,"said that letters are now posted in the mail from the Archbishop of Canterbury to bishops who have been initially invited to Lambeth but who have been identified as not supporting the Windsor Report and the Covenant.

This is British-style way of saying that these bishops - unless they can prove they will turn around and support Windsor and the Covenant - are now not welcome at Lambeth. Those bishops might as well, unless they can state otherwise, stay home. Unless they want to have some of this for dinner.

Those letters, according to Bishop Wright, are in the mail. Right now.

When the Archbishop issued his invitations, he made it clear as I said that their basis was Windsor and the Covenant as the tools to shape our future common life. That invitation was issued only three months after the remarkable joint statement from the Primates issued in Tanzania in February 2007.

After a summer and autumn of various tangled and unsatisfactory events, the Archbishop then wrote an Advent pastoral letter in which he reiterated the terms of his initial invitation and declared that he would be writing to those bishops who might be thought particularly unsympathetic to Windsor and the Covenant to ask them whether they were really prepared to build on this dual foundation.

Those letters, I understand, are in the post as we speak, written with apostolic pain and heart-searching but also with apostolic necessity. I am well aware that many will say this is far too little, far too late - just as many others will be livid to think that the Archbishop, having already not invited Gene Robinson to Lambeth, should be suggesting that some others might absent themselves as well. But this is what he promised he would do, and he is doing it. If I know anything about anything, I know that he deserves our prayers at this most difficult and fraught moment in the run-up to Lambeth itself.

So, the Archbishop of Canterbury has written letters to bishops he's identified as being "particularly unsympathetic to Windsor and the Covenant" and that his letter will ask those bishops whether they are really prepared to "build on this dual foundation."

Or what? Is Bishop Wright appears to be saying that those bishops invitation will be withdrawn. Decorum is left in tact if the bishops "absent themselves" rather than receive a rude letter of "don't call us, we'll call you."

Whom has he now deemed to be un--Windsor and un-Covenant compliant? Does this include the two primates communiques in Ireland and Tanzania as well? Is this mean that if you didn't show up for the Windsor Bishop meetings at Camp Allen you are not "Windsor compliant?" Is he talking about the working draft of the Covenant that came out of the Design Group chaired by Archbishop Drexel Gomez?

That would be a lot of Episcopal bishops, including all of those who participated in the consecration of Gene Robinson. Do we remember who they were? Here's the list:

Many of these on this list are now retired. Is a letter in the mail to all who are still diocesans or suffragans, or stipend-assistants?

Is he also sending letters to the bishops who are being deposed - like the Bishop of San Joaquin - or those threatened with deposition - like the Bishop of Pittsburgh? Both of them actually attended the Camp Allen meeting of Windsor Bishops and signed their letter to the House of Bishops. Here is a list of the bishops that signed the letter supporting the Windsor Report:

The Rt. Rev. Jack L. Iker
Diocese of Forth Worth

The Rt. Rev. John B. Lipscomb
Diocese of Southwest Florida

The Rt. Rev. Don A. Wimberly
Diocese of Texas

This could prove interesting. Who has Rowan Williams identified? Stay tuned, according to Bishop Wright, the letters are now in the mail. News will be breaking shortly, no doubt about that.

LATER: If this is the real deal and Bishop Wright is not just whistling Dixie, how audacious will Rowan Williams actually be? What would cause him to finally pull the proverbial plug on the one big happy tent and actually say to a group of personally-selected, no money back guarantee group of bishops "here's your hat, what's your hurry?"

Does he think this will help keep GAFCON at bay? "You can't boycott Lambeth if I say you can't come," or some other kind of whine. And how about those 815 lawsuits? Thing aren't going so well at the moment - might they need a little foreign intervention?

Wow, bb - you've scooped the other reasserter blogs on this one. Now the speculations begin and we wait to hear the howling.

The agenda for Lambeth has been described by leaders of the Global South as being without substance - a waste of time and resources.

Rowan surely needs our prayers, but I get this feeling that it no longer matters who goes to Lambeth. Is it anything more than a catwalk for those who want to be seen there.

RW's waffling -- and the impotence of Lambeth '98 -- has already made it clear to the "more conservative" of Anglicans that Lambeth is "full of sound and fury, signifying nothing."

A half-measure -- and that sounds like what this is -- of "requesting" a handful of the most extreme to "absent themselves" won't do it.

First of all, of course, the forces of the apostate jihad won't chose to "absent themselves" unless they are told, point blank, that they are un-invited and are met by police forces at the door. At which case they'll go pow-wow with V. G. "I'm not the gay bishop" R., Gandalf, and the reporters on their soap boxes outside the gates of Lambeth.

But, more essentially, unless these letters show that RW is actually taking a stand by dis-inviting all those who have actively worked against Windsor (and this list should start with Dr. Schori and work its way down through the majority of PEcUSA's H.O.B.), then this "request" will be viewed as exactly what it probably is -- yet another half-hearted effort, of far too little far too late and done without personal conviction, to save face... without actually changing the situation.

In which case (and my money is on the "meaningless handslap" predictions), astute observers will rightly conclude that these letters simply represent nothing but yet another indication of the impotence of Lambeth and the vacuity of "least common denominator" sort of ineffectual "resolutions" which would be agreed upon there.

It's official, Rowan Williams has finally surpassed the Waffle output of Aunt Jemima!

Baby Blue, You forgot Louttit, Bishop of GA who has been an avid 'listener' and who has given Integrity space in his diocese newsletter. He is definitely a quiet conspirator/consenter to the consecration of Robinson.

In addition, Rowan William has already affirmed, embraced and welcomed the new Presiding Bishop of TEc. It is doubtful that he will or has uninvited her.

Any actions and words of the ABC at this point irrelevant and despicable. He, with his sharia law, betrayals of the orthodox since 2003 has made himself the enemy of the Cross and Blood and the Church of Jesus Christ.

NT Wright is grasping at straws that are already smoking and about to burn with the whole dadburned Canterbury Anglican Barn.

Well, then there are those primates who have stated that there is no need to participate in a listening process in their province.

Then there are those primates and bishops who have crossed boundaries.

Then there are ... sheesh, the list of those uninvited could be longer than those invited!

Pray for Rowan.
Pray for the Church.

Reappraisers had the scoop first for some reason.

And now Episcopal Cafe's The Lead is adding to its reporting that the letters have not been mailed. There's even doubt about who the ABC is concerned to address. Like John-David Schofield as one example, although I'd argue he's already put himself into the category of irregularly consecrated bishops.

Bishop Wright is positioning himself for the top spot. But I am profoundly skeptical and will remain so until I see the letters. Even then, I suspect we will be treated to the same gaseous effusion that has characterized so much of both Williams' and Wright's pronouncements on these matters.

Another song came to mind: http://www.youtube.com/watch?v=aiGPQVUJqq0

But alas and alack, they do not seem very sorry after all.

Jim Naughton is posting over at the Diocese of Washington's Episcopal Cafe that Jim Rosenthal told him "No additional letters have been sent to anyone at this point."

We assume he's talking about the letters to the bishops and not that all correspondence has ceased out of the England.

It is a curious response - it doesn't deny that there are letters and it doesn't deny that letters are about to be sent. It just denies that - at least from the official office of the Anglican Communion (which is technically not the same as Lambeth Palace) the letters have been posted at the time Jim Rosenthal said that to Jim Naughton.

Was there a delay from the time Bishop Wright was led to believe they were in the mail - or did he take a long walk across the carpet only to find it yanked out from under him?

Whatever the case, Bishop Wright is being ither engaging in wishful thinking (not exactly a pasttime for a theologian of his caliber), has gone daft under the stress, mistook the word toast for post, or was fibbed to.

Or perhaps did Jim R. say that to Jim N even as Jim R. was watching the letters pop out of the printer?

We could imagine someone saying to Tom Wright, "oh the letters are toast" rather than "the letters are in the post." In America, "toast" means they are yanked, perhaps like the rug that was under his feet.

Perhaps Rowan is writing them by hand (there's a job opening in Lambeth for a new secretary and perhaps he's resorting to pulling out the old dusty Oliver and typing them up for Jane to proof?) and then posting them on the way to Vespers?

Seriously, we do know that all five of primates who make up the Joint Standing Committee have not been consulted.

This might be a good time to call Inspector Linley. Stay tuned.

While Bp. Louttit of Georgia has been a moderate Bishop and is now seeing the diocese fall apart, he did not consent to the election of Gene Robinson. He is a Bishop that does not like confrontation so I am sure that is the reason why he has allowed Integrity to have space in the Church in Georgia, also remember that the CiGA has an independent editor and is not done by the Diocesan office. It will be interesting to see who gets elected to replace Bp. Louttit since he has now called for the election of his successor.