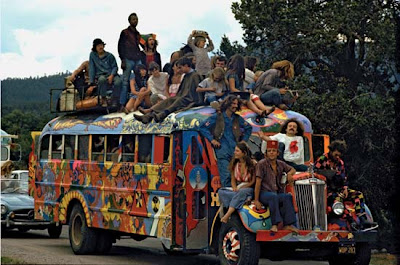 So did you think all this time that Rowan Williams, still the Archbishop of Canterbury, has been trying to hatch a plan to save the Anglican Communion?

That's all been a cover for his greatest accomplishment yet: a new Anglican hippie-style "Commune in a Bus" for those who have overdosed on too much T.E.C.

And you know who you are.

The bus is conveniently parked right outside the historic Canterbury Cathedral in England. With Rowan at the wheel, word on the street has it that no invitation is necessary. Just jump on the bus and you're in.

"It's designed to be self-selecting," said Chris Johnson, standing on top of the bus with Tim Russert, preparing to do a live telecast of Meet the Press topside. "You know when you've done too much T.E.C. and then here comes Rowan and the Bus. Groovy, man, peace. I'm so there."

"Yeah, I know I'm from Mississippi and I got guns," said Greg Griffith, flashing the peace sign as he painted pictures on the sidewalks by the bus outside Canterbury Cathedral. "But who needs a gun when you got a bus? Like - wow."

The former webmaster of StandFirm (Susan Russell call your office) seemed positively tranquil in his Grateful Dead pink and green tie-die shirt, John Lennonesque glasses, bell-bottom patched up jeans and Roman sandals, a hand-made wooden peace sign hanging around his neck, "but like, what the hell, I like that dude, he's like a far-out dude, he's like a groovy dude, that Rowan dude." Fr. Jake, also peacefully finger-painting pictures on the sidewalk nearby of San Joaquin landscapes, nodded in agreement.

"I dig it," he said, splashing more psychedelic paint all over the sidewalk. "He's no Frank Griswold, you know, but he sure can paint a bus."

"We're actually thinking about going on the road," said a sanguine Peter Toon aka Michael Poon. "If we run out of seats on the bus, we'll just pile up folks on the roof." He opened a map of Rome. "Who knows who we might pick up there?"

BabyBlue is reportedly on her way to Canterbury after finishing the South American leg of the Bob Dylan tour, once again driving the band's tour bus, avoiding flying harmonicas, and (like last year) playing in the band.

"I'm practicing My Sweet Lord on the tambourine," she said in a statement.

JUST IN: We now have live video of the "happening-gig rehearsal" on top of the Canterbury Commune Bus last night. Yeah, it sure is, it's Sarah Hey on the guitar. Who knew?

That's what happens when you do too much T.E.C.

NEXT UP: Insider news on the revamped "Lambeth Be-In" with the Lambeth Conference activities now based on the 1967 San Francisco Be-In. Sir Paul McCartney is scheduled to perform All You Need is Love and Check is in the Mail. 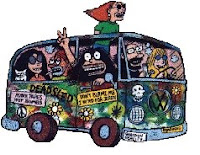 "Tea with the Queen" will take place topside on the Commune Bus for easy access. Kenneth Kearon said that the bus will get "an extra sparkle." Following Tea, the Queen will ride in the Commune Bus back to Windsor Palace accompanied by Ruth Gledhill of The Times. The Archbishop of Canterbury will drive. Mark Harris and Matt Kennedy will navigate. Chris Sugden and Jim Naugton will handle the press. Jim Rosenthal will play Father Christmas. 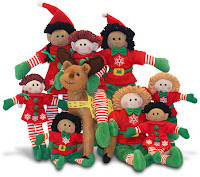 BREAKING NEWS: Details are sketchy but it appears there is a major disappearance of "the elves," known to inhabit particular websites based in South Carolina, Mississippi, and Western Canada. Attempts to contact the Great Elf Binky and his cohorts have been unsuccessful. There is concern that they may have been kidnapped and are being held hostage at some undisclosed location. All that was left behind was this video which law enforcement officials believe contains a coded message:


WHERE ARE THE ELVES?

Fortunately, the Canterbury Commune Bus comes equipped with it's own Anglican Elf Tracker (Father Christmas is on the bus, after all). Rowan has fired up the engines and engaged the Elf Tracker and we're all packed in and ready to hit the road. Kendall Harmon is perched up topside on the roof with the Anglican Elf Tracker and trying to pick up a signal. Hold on, Kendall! Rowan's at the wheel and hittin' the road. Ah, to have a Cause!

"That's what happens when you do too much T.E.C."

I feel so unloved. Boo hoo.
Any room for elves on the bus?

As Sarah might say. "Koff Koff"
It does seem there's a certain section of the Anglican blogosphere -- hint begins with the letter T -- being excluded. Koff Koff.

Are we supposed to get our own bus?

And yet another reason to be thankful we ran off to Uganda.

Duuuuuude...
I jumped aboard this magic bus, dropped some MDGs and ooohhh, the colors...

April Fool's Day, right? Please, please. BB's having a day of it, methinks, butter beer and all.

BB, the great plains are QUIET. You can drive on the interstate and sometimes not see another care out to either horizon.

Besides, the Lakota speak of "Chanotilah" - little woodlands people. So, once you reach the Black Hills, you can resume the elf search. Or just get a drink and play some cards in Deadwood.

I going home to hide under the covers and hope this is all a bad dream ...

Kevin, it's OK. Just remember that the CoE is just TEc's older brother.

OK. Maybe that isn't very comforting after all.

But this bad trip that TEc and (it seems) the CoE are headed out on is FORTUNATELY something the rest of us only have to observe. We actually don't really have to participate in in this psychadelic adventure into the gnostic wilderness that Kate, who is really the later day reincarnation of the love child of Jimmi Hendrix and Janis Joplin, is foisting upon the poor lamented Piskies.

Pity the poor old line Piskies who are just content to sit in the pews for an hour each week with their fingers packed in their ears while waxing nostalgic about the way it was (and for them, still is) in the days of the '28 BCP. Hopefully, they will never have to wake up from their dreamworld.

They may be lost and they don't want to discover the way it was.

So, was it the Double-G or the Everlasting WorldStopper who did the paint job on Kate's funny hat?

This has been a great piece of satire BB. But alas, Life does have a way of imitating art...

As a Georgia Bulldog, I loved the "Who let the elves out" video. If you can't laugh at this then you are taking your life way too seriously.