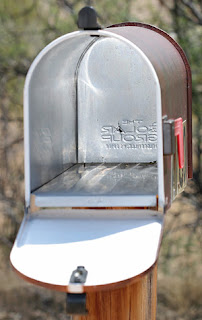 Intrepid Anglican reporter at the London Times (who still has a job), Ruth Gledhill, has tracked down the Bishop of Durham, N.T. Wright as he was getting on a plane for New York and interviewed him about the gone-missing letters from the Archbishop of Canterbury to bishops deemed to not support Windsor or the Covenant. Here's her scoop:

Bishop Tom also said that he had been told last week that the letters were going out. He told me: 'I may have got the timing wrong. If so, that is purely a misunderstanding between me and the people I talk to. The Archbishop promised in his Advent Letter that he would send some letters to people about certain things. He's repeatedly said that was going to happen. It is something that was promised last December. The Archbishop was waiting for the Joint Standing Committee to meet.'

The Bishop of Durham goes on to say:

In addition, she tracked down someone willing to comment at Lambeth Palace (Ruth calls it LamPal, which reminds us of PayPal, but never mind - we like it!). She found an assistant to the press secretary, Ed Greenall who was willing to be quited from inside the Palace (remember, this is different than Jim Rosenthal's operation with Kenneth Kearon at the Anglican Communion Office). He wrote to Ruth and said:

'I understand you called regarding the Bishop of Durham’s Fulcrum lecture and, as the Archbishop said in his Advent letter, he intends to be “in direct contact with those who have expressed unease about this, so as to try and clarify how deep their difficulties go with accepting or adopting the Conference's agenda.” As far as I am aware things have not gone as far as the Bishop of Durham suggests in his Fulcrum lecture, and I believe that no letters have yet been sent.'

When Ruth pressed her further, he reiterated the point in a second e-mail:

'No letters have yet been sent. As for when and whether they will be, we are not in a position to say."

The word of the day is yet. Yet is akin to at this point. But no one - no one - has denied that the letters exist. Tom Wright is no doubting Thomas, as Ruth points out - he believes what he was told and stands by it.

No denial from any of the parties that the letters do not exist and Bishop Wright stands by his word. Read the rest of Ruth's article here.

You mean to say the Bishop of Durham was actually in England for a change?

Okay, I literally wrote in an anti-triangulation email "I know I'm strange, but I'm a redneck of high class pedigree. I was born and raised with a silver spoon in my mouth, shoot before I moved out my parents had several ancient Ming Dynasty items in the house, but my second job I learn which end is the business end of a shovel because I'm severely dyslexic. to explain the my logic of "I know this is odd, but I work with 'rednecks' which has been understood as I work in a hostile work environment, but honestly I value their bluntness, every time I've been bullied in the Church it's been when someone whips out white collar office politics on me -- I don't understand them and I have no defense against them and am often bullied by them. One 'redneck ethic' is never say anything that you're not willing to say to a person's face."

Ruth and +Tom win the tell it like it is award from this high class "redneck" (not sure if I've earned the title since I've been laof'n as a paper-pusher) but I do honor the forthrightness!


Signed, I may have grown ancient Ming Dynasty items in the house, but my second job I learn which end is the business of a shovel (as well as value of honesty),