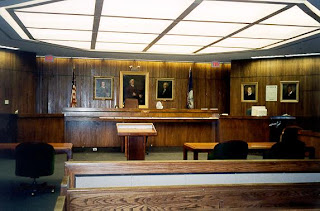 FAIRFAX, Va. (April 25, 2008) - The 11 Anglican churches being sued by The Episcopal Church and the Diocese of Virginia responded to the Fairfax County Circuit Court decision to open discovery around the Contracts Clause, congregational votes and related questions.

"Today's Court ruling is part of the process which will prove that the 11 churches own their property and that they followed proper procedures when an overwhelming majority in each church voted to disaffiliate from The Episcopal Church and Diocese of Virginia," said Jim Oakes, vice-chairman of the Anglican District of Virginia. The 11 churches being sued by The Episcopal Church are a part of ADV.

"Judge Randy Bellows has indicated that he would like to see the entire case resolved soon after the October hearing. We welcome that news as we have consistently stated our belief that this litigation is a regrettable distraction from our core mission as a church. He also invited the parties to submit lists of issues that can be decided as a matter of law without any further discovery. On the remaining issues, Judge Bellows indicated that he would be receptive to motions for protective orders should discovery become too burdensome, which we appreciate.

"Let's be clear - our churches' own trustees hold title for the benefit of their congregations. The Episcopal Church and Diocese of Virginia have never actually owned any of the property, and their names do not appear on the deeds to the property. The Virginia Supreme Court has consistently stated that Virginia does not recognize denominational trusts of the sort asserted by The Episcopal Church and the Diocese.

"We are grateful that Judge Bellows already ruled that the Virginia Division Statute applies to our situation. Virginia has a long history of deferring to local control of church property, and the Division Statute says that the majority of the church is entitled to its property when a group of congregations divide from their former denomination and form or join a new one. The Episcopal Church's own complaint acknowledges that it does not hold title to any property of these eleven churches and that the churches' own trustees hold title to all such property for the benefit of the congregations. Moreover, it is the congregations and their members - not the denomination -- who have contributed the funds that built and maintained these churches over the years. Some of the churches-like The Falls Church and Truro-actually predate the denomination and helped establish it."

To comply with the requirements of the Virginia Division Statute, Virginia Code §57-9, which recognizes the right of a congregation to keep its property when a majority votes to separate from a divided denomination, the voting churches reported to their local circuit courts their votes to disaffiliate from The Episcopal Church and the Diocese and to affiliate with CANA through membership in ADV.

"In most of these churches, 90% or more of the members voted to leave the denomination due to the clear division within The Episcopal Church, which the Court recently confirmed. The Diocese of Virginia and The Episcopal Church broke their relationship with the worldwide Anglican Communion and fell out of step with much of Christendom by choosing to redefine and reinterpret Scripture," Oakes said.

SATURDAY AM UPDATE: Here's a rather terse statement from the Diocese of Virginia (no one is quoted). Look like the new Secretary of the Diocese, a former litigator at Troutman Sanders, is writing the press releases now (which means they need to be read as though a litigator wrote them, which of course, he did):

We are now less than six months away from a trial that will require significant preparations and are pleased that the Court has granted our request to proceed with discovery. We believe that a full and fair examination of the facts – including the opportunity for a thorough and necessary process of discovery – will show that the property in question is held in trust for The Episcopal Church and future generations of Episcopalians.

One thing that's sort of interesting is that it makes no mention of the May 28th hearing called by Judge Bellows. Why would they not mention that the next important date is not six months away, but one month away?

SATURDAY PM UPDATE: David Trimble at Still On Patrol has written some interesting observations that are very much worth the read. His post is here. Check it out!

Okay, here we go! Prayers appreciated, as part of this paper trail leads to my desk.

As we say in the medical field "if it isn't on paper it didn't happen". I commend my fellow Anglicans in the Old Dominion in having followed this sage advice to the T. Just remember that Deo Vindice!

If you are interested in reading more of the background look at http://www.pwcweb.com/ecw/tec_to_nigeria.html

The votes were actually required by the diocese as a step in the protocol for departing congregations!

Thanks for the link, anon! Very helpful background.

I'm puzzled over this statement: "and to affiliate with CANA through membership in ADV."

Are all parishes who become members of the ADV automatically affiliated with CANA?

I was under the impression that some parishes that were members of the ADV were not affiliated with CANA.

ADV is like a diocese - the Virginia Churches don't join CANA directly, but through the Anglican District of Virginia. For example, a former Charismatic Episcopal Church in Virginia recently affiliated with CANA, but did so by joining the ADV.

But there is also flexibility in the structures of the ADV. Churches that are under the Province of Uganda under the care of Bishop John Guernsey and reside in Virginia are also full voting members of the ADV and have representation on the ADV Board. Suffragan Bishop David Bena looks after everyone. He's amazing.

By the way, member churches of the ADV, though, are not just in Virginia but also are in Washington, D.C.

This way we are able to share all our ministries together - those who found they needed to separate from TEC earlier and those who separated later. The focus is on the local parishes, not on a centralized hub. The bishops provide our connection to the Anglican Communion in several different directions - through Martyn Minns as a diocesan-level bishop in the Province of Nigeria, through David Bena, a suffragan bishop in the Province of Nigeria, through John Guernsey in the Province of Uganda and as the Mid-Atlantic Dean of the Anglican Communion Network, and through all of our membership in Common Cause.

But I think it's important to understand that the center of the ADV is the local parish and everything works up from there, not the other way around. This brings the laity as leaders into the mix, which has always been a struggle for Anglicans to do. Since we are a church of "bishops" and our sense of communion derives from the Catholic understanding of the Order of Bishops, we tend to think top down. But one of the hallmarks of the renewal in the Episcopal Church was that this was turned up side down and the parishes became the focus of ministry with the bishops providing support, teaching, and care.

That is what we are seeing - in my opinion - in the Anglican District of Virginia. To God be the glory.