Despite Deposing Anglo Catholic Bishops by the boatload and sending the rest off to Rome, the Episcopal Church thinks monasteries are swell 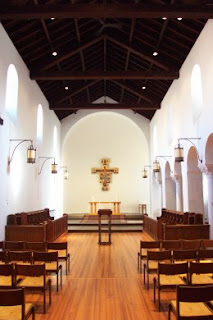 Very interesting article placed in the Washington Post today and picked up immediately by the Diocese of Washington's Episcopal Cafe from the Religious News Service about, of all things, monastic orders in the Episcopal Church.

That's not exactly one of the Post's top topics in a political year. While the article emphasizes that "Episcopal" monastic orders are independent of the Episcopal Church structures, the article does not mention that some of these Orders are in Common Cause through Forward in Faith. It also makes no mention of the recent unpleasantness in the Diocese of San Joaquin or the fact that several Anglo Catholic bishops, who belong to religious orders, have been deposed or are threatened with deposition. It also doesn't mention that some of the Anglo Catholic bishops who support the monastic traditions in the church have left for Rome.

The "CAROA" website is located through the organization that hosted the Diocese of San Joaquin's website until it was suddenly and without notice yanked and replaced by the shadow diocese installed by the Presiding Bishop after Easter. As we know, San Joaquin is a "high church" diocese that is very much in line with the monastic traditions. It's bishop, the Rt. Rev. John David Scofield, is a member of the Society of the Holy Cross. The Society of the Holy Cross (SSC) is an international Anglo-Catholic society of priests with members in the Anglican Communion, the Continuing Anglican Movement, and the Roman Catholic Church's Anglican Use.

Why suddenly the interest in "Episcopal" monasteries and convents and no mention that the conservative Anglo Catholics are pouring out of the Episcopal Church in droves? The bishops that are being tried and deposed have all been Anglo Catholic bishops. Is this an attempt to quell the rebellion in the Episcopal ranks of Anglo Catholics and put a happy face out in public that all is still well? Perhaps things did not go as well as planned in Lodi or Camp Allen.

Believe me - an article on the happy monastic life of Episcopalians does not just suddenly pop up in the Washington Post during a political year. It's there for a reason.

Since it's not mentioned at all in the Post article, read more about Forward in Faith here. Keep watch and pray.
Posted by Unknown at 10:23 AM

I have found that the presumption is quite often made that monasticism and Anglicanism can go hand-in-hand and that no one should question, much less oppose this. Rather than enter into any debate here I wish simply to refer anyone interested to the following Tracts which were produced by the Church Association and which may be found on the website of the Church Society. They are Tracts numbers 244, 245, 246, 322, 323, 347, 386, 418, and 419.

While I was raised an Anglo-Catholic with Holy Spirit sisters at our parish, I'm constantly surprised by Episcopalians who are unaware of Anglican religious orders. Whether you think they are a good idea it a different matter. But I think TEC thinks they are "swell" for two reasons. First, they add to the mirage of the branch theory that attempts to place the Anglican Communion on the same level as the ancient Churches of Rome and Constantinople. Second, many of them are rabidly revisionist in their "theology."

And Gene Robinson wasn't allowed into the Big Top at Lambeth - why? Wasn't there something about a tearing apart the fabric of the communion, or some such thing?

The fact, is TEC has a terrible problem - and its' problem that continues to worsen as the 815 leadership now opposes the Anglican Covenant as well. It's just getting worse.

I noticed that you illustrated your post on Anglican monasteries with a photo of the chapel at Holy Cross Monastery (www.holycrossmonastery.com). As an Associate thereof, I believe I can say with complete confidence that this particular Holy Cross is NOT involved with Forward in Faith. Quite the opposite, in fact.

I'm not saying you were implying an association in your post. Just wanted to set the record straight.