Time for a Visit to Oz 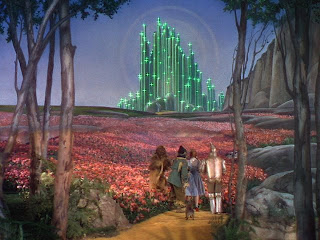 BB NOTE: Here is an interesting editorial by American author, Orson Scott Card (who's own works pre-date Harry Potter but carry significant similarities). He is coming from a literary point of view, which has been the point of view until the lawyers at Warner Brothers came along and saw an opportunity.

We've posted some of our own thoughts at Shell Cottage. There are also interesting editorials written by Jeopardy Champion, Ken Jennings here that is worth checking out. Who knew he had a blog? And yes, we had Bjo Trimble’s Star Trek Concordance too. We also have a massive one (that just went to paperback with new additions) on Bob Dylan that we read for fun. That one comes with a CD version as well.

Here is the editorial by Orson Scott Card:

Can you believe that J.K. Rowling is suing a small publisher because she claims their 10,000-copy edition of The Harry Potter Lexicon, a book about Rowling's hugely successful novel series, is just a "rearrangement" of her own material.

Well, heck, I feel like the plot of my novel Ender's Game was stolen by J.K. Rowling.

A young kid growing up in an oppressive family situation suddenly learns that he is one of a special class of children with special abilities, who are to be educated in a remote training facility where student life is dominated by an intense game played by teams flying in midair, at which this kid turns out to be exceptionally talented and a natural leader. He trains other kids in unauthorized extra sessions, which enrages his enemies, who attack him with the intention of killing him; but he is protected by his loyal, brilliant friends and gains strength from the love of some of his family members. He is given special guidance by an older man of legendary accomplishments who previously kept the enemy at bay. He goes on to become the crucial figure in a struggle against an unseen enemy who threatens the whole world.

This paragraph lists only the most prominent similarities between Ender's Game and the Harry Potter series. My book was published in England many years before Rowling began writing about Harry Potter. Rowling was known to be reading widely in speculative fiction during the era after the publication of my book.

I can get on the stand and cry, too, Ms. Rowling, and talk about feeling "personally violated."

The difference between us is that I actually make enough money from Ender's Game to be content, without having to try to punish other people whose creativity might have been inspired by something I wrote.

Mine is not the only work that one can charge Rowling "borrowed" from. Check out this piece from a fan site, pointing out links between Harry Potter and other previous works: http://www.geocities.com/versetrue/rowling.htm. And don't forget the lawsuit by Nancy K. Stouffer, the author of a book entitled The Legend of Rah and the Muggles, whose hero was named "Larry Potter."

It's true that we writers borrow words from each other – but we're supposed to admit it and not pretend we're original when we're not. I took the word ansible from Ursula K. LeGuin, and have always said so. Rowling, however, denies everything.

If Steven Vander Ark, the author of Lexicon, had written fiction that he claimed was original, when it was actually a rearrangement of ideas taken from the Harry Potter books, then she'd have a case.

But Lexicon is intended only as a reference book for people who have already paid for their copies of Rowling's books. Even though the book is not scholarly, it certainly falls within the realm of scholarly comment.

Rowling's hypocrisy is so thick I can hardly breathe: Prior to the publication of each novel, there were books about them that were no more intrusive than Lexicon. I contributed to one of them, and there was no complaint about it from Rowling or her publishers because they knew perfectly well that these fan/scholar ancillary publications were great publicity and actually boosted sales.

But now the Harry Potter series is over, and Rowling claims that her "creative work" is being "decimated."

Of course, she doesn't claim that it's the Lexicon that is harming her "creative work" (who's she borrowing from this time?); it's the lawsuit itself! And since she chose to bring the suit, whose fault is it? If she had left Vander Ark alone to publish his little book and make his little bit of money, she wouldn't be distracted from her next novel.

But no, Rowling claims Vander Ark's book "constitutes wholesale theft of 17 years of my hard work."

Seventeen years? What a crock. Apparently she includes in that total the timeframe in which she was reading – and borrowing from – the work of other writers.

On the stand, though, Rowling's chief complaint seems to be that she would do a better job of annotating and encyclopedizing her own series.

Nothing prevents her from doing exactly that – annotating and explaining her own novels. Do you think that if there were a Harry Potter Annotated by the Author, Vander Ark's book would interfere with her sales in any way?

This frivolous lawsuit puts at serious risk the entire tradition of commentary on fiction. Any student writing a paper about the Harry Potter books, any scholarly treatise about it, will certainly do everything she's complaining about.

Once you publish fiction, Ms. Rowling, anybody is free to write about it, to comment on it, and to quote liberally from it, as long as the source is cited.

Here's the irony: Vander Ark had the material for this book on his website for years, and Rowling is quoted as saying that when she needed to look up some 'fact" from her earlier books, she would sometimes "sneak into an Internet cafe while out writing and check a fact rather than go into a bookshop and buy a copy of Harry Potter."

In other words, she already had made personal use of Vander Ark's work and found it valuable. Even if it has shortcomings, she found it useful.

That means that Vander Ark created something original and useful – he added value to the product. If Rowling wants to claim that it interferes with her creativity now, she should have made that complaint back when she was using it – and giving Vander Ark an award for his website back in 2004.

Now, of course, she regrets "bitterly" having given the award.

You know what I think is going on?

Rowling has nowhere to go and nothing to do now that the Harry Potter series is over. After all her literary borrowing, she shot her wad and she's flailing about trying to come up with something to do that means anything.

Moreover, she is desperate for literary respectability. Even though she made more money than the queen or Oprah Winfrey in some years, she had to see her books pushed off the bestseller lists and consigned to a special "children's book" list. Litterateurs sneer at her work as a kind of subliterature, not really worth discussing.

It makes her insane. The money wasn't enough. She wants to be treated with respect.

At the same time, she's also surrounded by people whose primary function is to suck up to her. No doubt some of them were saying to her, "It's wrong for these other people to be exploiting what you created to make money for themselves."

She let herself be talked into being outraged over a perfectly normal publishing activity, one that she had actually made use of herself during its web incarnation.

Now she is suing somebody who has devoted years to promoting her work and making no money from his efforts – which actually helped her make some of her bazillions of dollars.

Talent does not excuse Rowling's ingratitude, her vanity, her greed, her bullying of the little guy, and her pathetic claims of emotional distress.

I fully expect that the outcome of this lawsuit will be:

1. Publication of Lexicon will go on without any problem or prejudice, because it clearly falls within the copyright law's provision for scholarly work, commentary and review.

2. Rowling will be forced to pay Steven Vander Ark's legal fees, since her suit was utterly without merit from the start.

3. People who hear about this suit will have a sour taste in their mouth about Rowling from now on. Her Cinderella story once charmed us. Her greedy evil-witch behavior now disgusts us. And her next book will be perceived as the work of that evil witch.

It's like her stupid, self-serving claim that Dumbledore was gay. She wants credit for being very up-to-date and politically correct – but she didn't have the guts to put that supposed "fact" into the actual novels, knowing that it might hurt sales.

What a pretentious, puffed-up coward. When I have a gay character in my fiction, I say so right in the book. I don't wait until after it has had all its initial sales to mention it.

Rowling has now shown herself to lack a brain, a heart and courage. Clearly, she needs to visit Oz.

Visit Shell Cottage for more.
Posted by Unknown at 11:33 AM

It's a spectacularly frivolous, mean-spirited suit which she deserves to lose and almost certainly will loose. The notion that Vander Ark's work will in any way cut into her own profits (like she needs them) in the event that she cobbles together (or perhaps has cobbled together for her) her own Potter concordance, is ludicrous. My guess is that her agents and publishers were the prime movers.

Gee! J. K. Rowling volunteering as a metaphor for the once substantial Episcopal Church in this current ugly phase of its existence (if you are willing to stretch your imagination only a little as much as she did in her creative pursuits). Similes abound. None pretty for TEc.

I'm not as passionate about this issue as the writer of this piece -- but these two paragraphs were so so true and hit home:

It's like her stupid, self-serving claim that Dumbledore was gay. She wants credit for being very up-to-date and politically correct – but she didn't have the guts to put that supposed "fact" into the actual novels, knowing that it might hurt sales.

What a pretentious, puffed-up coward. When I have a gay character in my fiction, I say so right in the book. I don't wait until after it has had all its initial sales to mention it.