And you think the Episcopal Church has got problems ... 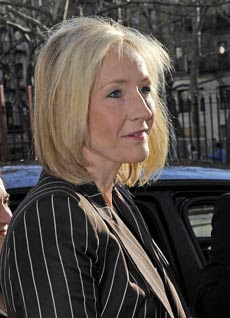 BB NOTE: As some of the regulars here at the Cafe know, we've been following the lawsuit against the Harry Potter Lexicon's Steve Vander Ark by Warner Brothers and J.K. Rowling. We've posted some articles of interest over at Shell Cottage. There's more here.

The trial finished this week in Manhattan and it was a doozy. Here's a spunky editorial (written as an open-letter to J.K. Rowling) published today MSNBC by Helen A.S. Popkin (who has a name right of Harry Potter!) of MSNBC. We sure don't know what's gotten into Jo, but we continue to think she should take out a page out of Bob Dylan's playbook and stop talking and start writing. The Scottish Book awaits!

Harry Potter and the Copyright Problem
An open letter to J.K. Rowling about the ramifications of this nasty lawsuit

You know how nobody ever looks good suing Paul “Macca” McCartney? Well, it’s just that … suing one of your biggest fans ever is starting to make you look like a crazy person.

This is something you might want to think twice about, since this here lawsuit is fixin’ to have ramifications on copyrights and the InterWeb for years and years to come.

Let’s review. About a decade ago, librarian Steven Vander Ark gave up his beloved “Star Trek” for a newer alternate universe — a byzantine world of your creation — the “Harry Potter” series. As you well know, what with your infamous side notes and cladagrams, “Harry Potter” gets complicated with the spells and the vocabulary and the family trees and whatnot.

So Mr. Vander Ark did the thing librarians are predisposed to do. He started organizing all-things “Harry” into a lexicon, which he placed on the Internet, as is the style of the day. People loved it. You loved it. One of the rare proponents of fan-generated Web content (at least back then), you awarded the Harry Potter Lexicon Web site with one of your coveted fan site awards.

What’s more, as is now quoted in every article about this case, you even praised the Harry Potter Lexicon on your own site: “This is such a great site that I have been known to sneak into an Internet cafe while out writing and check a fact rather than blah blah blah blah blah.”

Then something changed. RDR Books approached Mr. Vander Ark about expanding his extensively detailed reference guide from the realms of new media (the Internet) into the clutches of old skool publishing (a book). Here’s where things get weird.

For some reason, things that exist on the Internet are like those um, bone horse thingies or whatever you call them in your books, (My kingdom for a lexicon of the Wizarding World!) … you know, those carriage-pulling creatures that don’t really exist to people until they’ve witnessed a death or they get published on actual paper.

Now, by most accounts, Mr. Vander Ark was skeptical — wary of both infringing on your copyright, and more passionately, stepping on your toes.

Eventually, whether for money, fame or the honor of inclusion in your rarified atmosphere, Mr. Vander Ark agreed, with the caveat that the publishers handle all legal issues, should any present. And present they did, accompanied by a blogosphere onslaught of black viscous bile spewed at both Mr. Vander Ark for his alleged thievery and at you, now called by some, to be frank, a greedy b-word (rhymes with “witch”).

You, as court records show, denied that it was in any way about the money. And hey, that’s probably true. In fact you’ve got the kind of insane wealth that’s supposed to insulate you from meaningless crap like this. (You know, if you're richer than the Queen and this stuff gets to you, you should probably seek help… but that’s a whole other “Oprah.”)

It’s not that you don’t have a right to sue. Boundaries were crossed. “Harry Potter” is 100 percent your creation, the result of your hard work and the unique firing of your particular neurons. Copyright laws exist for a reason.

Heck, even Creative Commons copyrights feature a level that provides the right for others to access another’s creation as long as the person isn’t looking to cash in. In case you haven’t heard of Creative Commons licenses, here’s the deal:

See, while you spent the last eon or so immersed in your seven-volume tome, things among the Muggles changed … mostly because of the Internet. Now everybody has the ability to get in on the creative process. As a result, a lot of cool stuff gets made. Beyond fan fiction, which you know all about, there’s all kinds of media mashups from the most unusual collaborations. It’s a pretty cool phenomenon.

So anyway, this forward-thinking group of Internet savvy individuals got together and started a non profit organization called Creative Commons to deal with the unique copyright needs of the Internet. They created copyrights which allow others to expand on your original work to varying degrees, depending on the level you choose.

Since a Creative Commons license isn’t nearly as restrictive as a traditional copyright, it allows others to build upon or reference your original idea, within in the limits of your choosing.

I mention this mostly because this Creative Commons business is how things are going to go in the Internet’s future, like it or not. That’s just one of the reasons you might want to consider the wise words of the judge who advised that you kids, and all your lawyers, find some creative way to settle this nasty business.

The other thing is, you’ve really got to think long and hard before you sue a fan. It just never goes over well. Why? Because it’s not just about that one fan you’re suing, it’s all those other fans watching you sue that one fan who adores and supports you. Remember when Prince sent his lawyers after that one baby on YouTube dancing to his music?

Then there’s that kid himself, Mr. Vander Ark. (Yeah, I know he’s 50, but he’s still a kid.) Dude gave up “Star Trek” for you! And now you’re playing a game of weepy mental chase with a kid who made a Voldemort reference on the stand … which of course, makes him Harry Potter. You’re suing Harry Potter!

Leaving aside the question of copyrights and the fact that your jealous guarding of the universe you created actually helped the movies (because you insisted that the cast be — well, English children rather than "90210" 32-year-old teens), the point is you're rich! Settle back and enjoy the insane power, don't horde it and ruin other people's lives.

Be Dumbledore, not “She Who Must Not Be Named.”

I agree with this assessment. I love the Harry Potter books and thought your Dumbledore portrayal (when it turned out he was 'gay') just brilliant. They were a fun series and a great puzzle.

However, between the fact that Rowling HAD to make her best character a pawn of political correctness and this attack on a person who contributed so much to the understanding of her work, I don't know whether I ever want to buy/read another book of hers again. There is just something nasty about the whole business.

I loved the Harry Potter Lexicon - and it grieves me that because of JK Rowling, I can't even access it on the Net anymore. Just, as a friend of mine says 'sick and wrong'.

Kinda ruins it all for me too.

A well crafted letter. The implications of this lawsuit are huge for bloggers. Better watch our steps.

Eclipse said it a lot better than I could. This is a very dumb and stupid (and ultimately greedy, control-freaky) lawsuit. Shame on J.K. Rowling!

ha- ha! They're even making computer games out of this now! http://www.fyrebug.com/?p=5476 J.K. Rowling VS Steven Vander Ark tennis