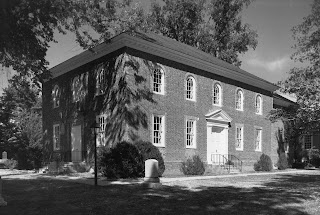 NOTE: The Washington Post quotes comments from a political organization called the "Virginia Interfaith Center for Public Policy." That is the organization that the Secretary of the Diocese of Virginia, Patrick Getlein, has just joined as a key staff member. His responsibilities there include directing the organization's strategic communications. Watch that space very carefully.


A Fairfax County judge has given an initial victory to conservatives from 11 Virginia churches who voted to break from the Episcopal Church and keep tens of millions of dollars in buildings and land.

The decision is a first step in a multi-trial case and does not settle who gets the properties. It applies to Virginia only but gives a morale boost to a national movement that believes there has been an un-Biblical liberal slant in the Episcopal Church, the U.S. branch of the worldwide Anglican Communion. The decades-old dispute exploded in 2004, when New Hampshire ordained a gay bishop.

In the decision issued last night, Circuit Court Judge Randy Bellows said he agreed with the breakaway churches -- which are primarily in Northern Virginia -- that their votes to leave in late 2006 and early 2007 constituted a legal "division" in the Episcopal Diocese of Virginia under a Civil War-era statute.

The diocese and the national church had argued that the votes were of a minority of dissenters and that the diocese owns the church properties. They also argue that the state law is unconstitutional, as it lets the government tell a religious denomination how to govern its affairs.

Bellows agreed in his decision to hear arguments in May related to whether the state law is constitutional or not. The court, he wrote, "does not decide today any issue related to the constitutionality" of the law.

The path to a conclusion is unclear, as a fall trial is scheduled to hear the diocese's broader lawsuit against the breakaway congregations. That lawsuit demands that the congregations vacate the properties and asks the judge to affirm that the land and churches belong to the diocese.

Scott Ward, an attorney for several of the congregations, noted that the state statute calls itself "conclusive" and said that might ultimately render a fall trial unnecessary.

But Henry Burt, a spokesman for the diocese, said his side believes that ownership of church property is determined by other things, including a denomination's laws and deeds and the history of how the property has been managed and controlled over time.

Some faith groups said the ruling could impact other religious organizations in Virginia. The Virginia Interfaith Center for Public Policy called it "chilling."

"The court has ruled that a splinter group of disgruntled former members can divide an autonomous, self-governed, hierarchically structured religious denomination against the denomination's will," wrote the Rev. Doug Smith, executive director of the group, in a statement. He said he was in dialogue with Catholic, Presbyterian and Methodist leaders, among others, about the ruling.

It sounds as if the Virginia Interfaith Center for Public Policy is made up of the liberal leadership of some mainline denominations which have been rocked by controversy over the leaderships liberal theology.

Since all the liberal leadership of TEC and other post modern denominations care about is money and power and control, such a decision by the court would be construed as "chilling" - scare quotes and all. I admit I got a chuckle out of the statement that the leader of VICPP was in "dialogue" with the Roman Catholics. Why would Roman Catholics have anything to do with such a group?

Kind of depends on which side of the fence you find yourself.

BB, thanks for the heads' up / reminder about Patrick Getlein. It seems the Post report is pretty biased. Not a lot of coverage of anyone from the ADV and their response.

Also, the WP has sloppy reporting:

The decades-old dispute exploded in 2004, when New Hampshire ordained a gay bishop.

Not exactly. It was 2003. And VGR was consecrated, not ordained. TEC has unfortunately been ordaining practicing homosexuals for years, sigh.

How can you possibly call this "Christian" when you single out a person like Patrick Getlein (and then pat yourselves on the back) but neglect to identify people Julia Duin as a similarly biased writer??

Good God. Julia Duin is a graduate of TESM, former member of Church of the Apostles in Fairfax, and a current member of The Falls Church... and yet she is the Washington Times' go-to reporter for all things Episcopal Controversy. How can she possibly write a story that isn't slanted?!