Has the Episcopal Church severed ties with the Anglican Province of Uganda? 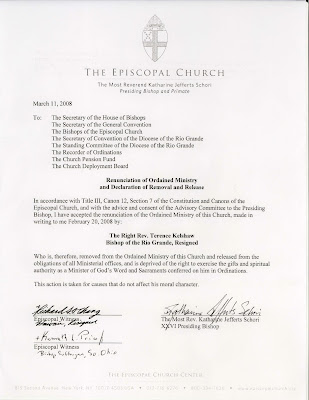 Tonight we learn that Bishop Kelshaw is now one of the latest targets of Katharine Jefferts Schori. She twisted his letter that he is now working as a member of the Anglican Province of Uganda as a renunciation of the ordained ministry. Does this mean that the Episcopal Church is no longer in communion with the Anglican Church of Uganda?

From The Living Church:

Last month Presiding Bishop Katharine Jefferts Schori informed Bishop Kelshaw by letter that she had accepted his renunciation of the ordained ministry and that he was “deprived of the right to exercise the gifts and spiritual authority as a minister of God’s word and sacraments.” The action came after Bishop Kelshaw wrote the Presiding Bishop to inform her that he had left The Episcopal Church.

“It means little to me in that I don’t intent to squabble with her over this,” Bishop Kelshaw said, “but I did not renounce my orders. I wrote to her last February informing her that I felt called to request alternate primatial oversight and that my request had been granted by Uganda. I am still a bishop within the Anglican Communion.”

More evidence of division in the Episcopal Church. It does seems that Schori is working on some internal deadline. Perhaps The Episcopal Church really does want to separate from the Anglican Communion and feeling confident that the Archbishop of Canterbury will never cut off the Episcopal Cash Cow, is now convinced that whatever malicious actions it takes against a Bishop of the Church, Rowan Williams will do nothing. In fact, he's put together his Little Group called the Windsor Continuation Group which has amongst its charges the authority to review Lambeth Invitations - and perhaps yank them. Lovely isn't it? 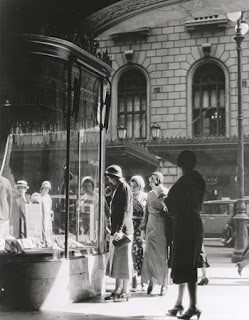 Of course, the Presiding Bishop has also put all her eggs into one litigation basket, following the scenario circulated through progressive channels back in 2003 of creating shadow congregations and shadow dioceses and expelling "dissidents" and seizing assets for its own coffers.

And so here she is threatening the former Diocesan Bishop of Rio Grande, an original AAC bishop. What's up with that? Run out of 80-somethings bishops to depose? So much for having an historic episcopate or admitting that the Anglican Primates are one of the Anglican Instruments of Unity. The Presiding Bishop seems to hold a different view - where the Episcopal Church is only store in town.

It appears that, from Schori's point of view, some bishops are more equal than others.

And what about the Anglican Church in Uganda - is it now, as we see implied in this threat from Bishop Schori. less equal that the Episcopal Church?

Indeed, is the Episcopal Church, for all intensive purposes, now reducing its relationship to the Anglican Communion to mere window dressing - while Canterbury as just another doggie in the window?

Is that Lenin's corpse in the window?

This is further evidence that the General Convention Church is currently engaged in a Pogrom. It's as simple as that.