Live at the Bob Dylan Concert 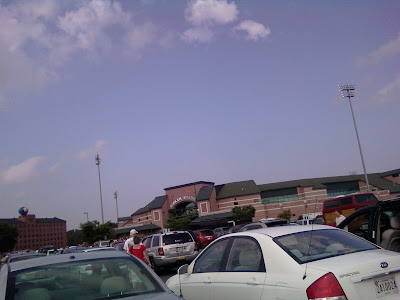 NEW UPDATE: BB's Review is now up at the legendary ExpectingRain.com.

UPDATED with photos and video.

I'm sitting outside Ripken Stadium in Aberdeen, Maryland. It took, well, it took a long time get here but I'm here and waiting for the doors to open in about ten minutes. People are tailgating here in the parking lot as recordings of Like a Rolling Stone fill the humid summer afternoon air. It's hard to tell that people are here for a concert, most of them look like they are actually going to a ballgame but for the tie-dyed shirt here and there. The murmur from the lawn chairs stretched out throughout the parking lot is festive and happy. Like a rolling stone.

I'll be Twittering the concert and you can follow those posts here.

Here is the setlist:

You know, this song list is perfect for after General Convention - I couldn't have thought up a better song list myself. Just gotta wonder. Robert!

I've added photos and want to make it clear, these were taken with my cell phone! 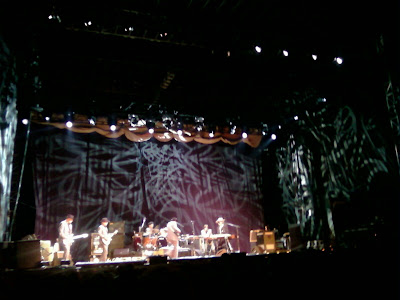 Bob Dylan played electric guitar on the the first two and took centered stage with his harmonica on my new favorite, Forgetful Heart. All the rest he was on electric keyboards.

This is one of the first performances that he was actually facing the audience on the keyboards and interacting as he played and sang. When he finished Thunder on the Mountain he actually did a flourish at the crowd, something I haven't seen him do. He was very energized and his voice is the best I've ever heard live - he really sang his heart out. Forgetful Heart was haunting, while his openers were filled with energy as he took center stage with his guitar, something he's only started to do in the States recently. His Oscar was as always taped to the amp near his keyboards. 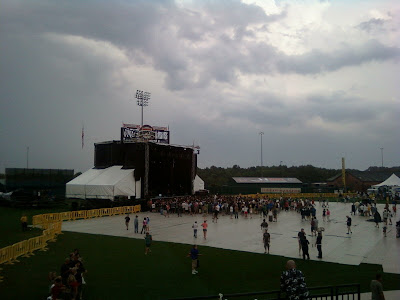 After one unknown (didn't catch the name) opening act, Willie Nelson took the stage and did his standards (they are all starting to sound the same to me since he seems to play all of them in the same key at the same beat). The storm clouds were all ready forming and it seemed like he raced through the last few before he abandoned the stage and the thunder and lightening took over center stage. I joined a hundred people in a tent where each flash of lightening was met by oooos and ahhhhs that I thought we might be at a 4th of July picnic. 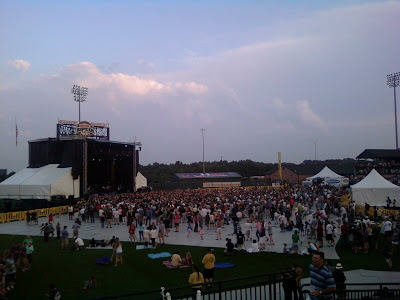 Actually, the entire night was like a 4th of July picnic - from the tailgating in the parking lot to the vast amount of families with small children who came and spread out blankets on the fields and let their children run.

During the storms, however, we were all huddled either in the tent or up by the concession stands until the deluge ended.

At some point during the storm, Bob Dylan's convoy arrived with a police escort (never get to see that since the focus is usually on the stage at that time) and people in the tent waved as his convoy of buses and police cars drove in the rolling thunder. Guess that's not the first time that's happened. 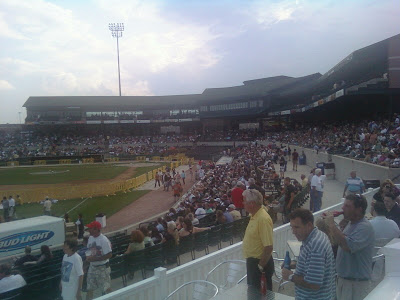 Then, finally, the sun broke through, the thunder rolled away, and the rain stopped and everyone returned to wet seats and tables and made the best. It was the happiest crowd I've ever been stuck in the thunderstorm with - it was almost as though it was part of the bill.

John Mellencamp came out next and he was terrific. He had enormous energy, seemed in fine form, and did a wide variety of music, from old rock and roll to folk blues. His voice was stellar and he did my favorite, Small Town, on an acoustic guitar, just like Side B. 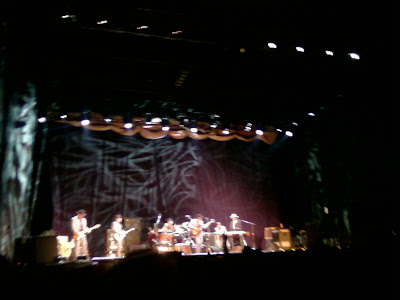 Then it was Dylan & his band's turn. The crowds turned over by the stage - the Willie Nelson group now sopping up beers at the aluminum tables and swapping stories of last summer's trip to Uncle Earl's Tavern. The Mellencamp Crowd - mostly children of the 70s - blended back into the stands to see if they could comprehend Dylan's lyrics this time. And the thousands of fans that had come to hear Dylan moved forward, including me.

I had thought I'd stay at my table - excited that I had a table - I thought I'd be civilized and sit by the table and just enjoy the music. But I realized as the time approached that half - if not perhaps even most - of the fun of seeing Dylan in person is watching him phrase and emote his songs, along with the possibility he might smile. Which he did.

I did attempt to Twitter from the Mosh Pit, which was more like standing in line for the It's A Small World After All ride at Disneyland. The vast majority of the crowd was in their twenties and thirties - a thousand of them and that has to make Dylan's day. They knew the songs too. 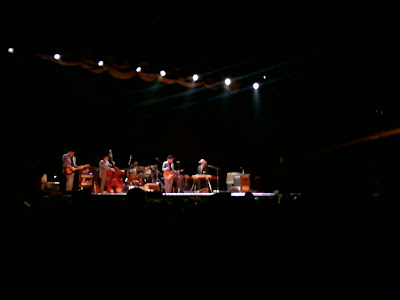 Of course, there were these four young guys with short haircuts who started to talk loudly to each other early in Dylan's set, shouting to each other about how they couldn't understand what Dylan was singing, "what is he saying!" they shouted to each other, "what's he singing? I can't understand him!" They kept shouting that over and over. But of course, how could they since they were so busy shouting at each other? It went on, and on, and on and finally I remembered that there are now advantages to being somewhat over 40 at a rock concert and told them to knock it off now. "Listen to him!" I said to them. "Knock it off and listen!" I felt like their mother. The crowd around us cheered.

It all rushed by too fast - again, my favorite of the night of course was Forgetful Heart, but Rolling Stone was especially fun since the crowd was singing along on the chorus. In fact, at one point Dylan stopped singing and the crowd just kept going. What year is this? 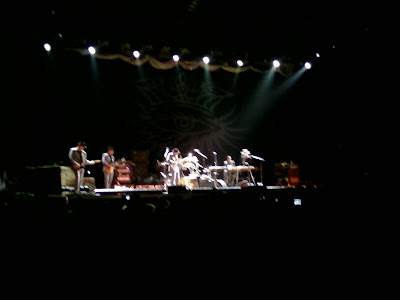 He sang Jolene in the encore and I could make a case that it's send up of Dolly Parton after she dissed him for not doing a duet with her on an album. "Honey I'm the King," Dylan croons, "And your the Queen."

But who else has been dissed lately?

Of course, it could be about something entirely different - which is what makes it fun. It's just how he said "Queen." It was 1980s nasal "Queeeeeeen." You can do that without grimacing. 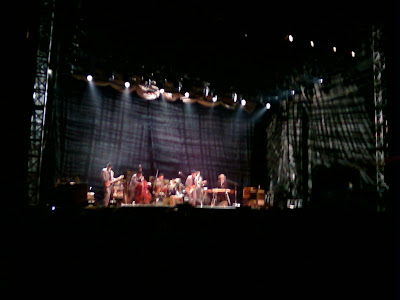 Then it was a three song encore finishing with All Along the Watchtower which was in the Hendrix arrangement - a rather pointed and mystic way to end a show when all is supposed to be well and happy in the Obama era. Oops.

Headed out for the cars and then was the next drama of the night.

Spent the next forty-five minutes and nothing, no, nothing moved in the parking lot. I knew there was only one way in and one way out (as is the case it seems with these minor league ball parks) but this was forty-five minutes of nothing. People just shut off their cars and some even started tailgating again, but for the few who honked their horns when the forty minute mark had passed.

Then I saw it, the convoy - the buses with police escort heading out of the park, heading for 95, heading south to the next gig. We'd all have to wait until the King went by. 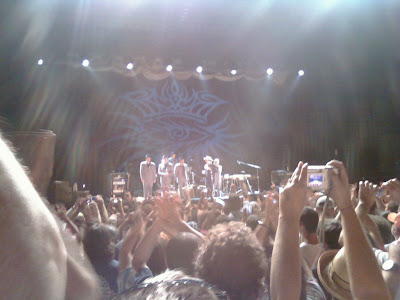 I loved it, though, I loved Willie, Mellencamp, and the storm, and Dylan who sang, "If it keeps on raining, the levee's gonna break." -It was worth driving a hundred miles north to make it. Had no idea Maryland was that big. I could have just kept on going and spent the night in Newark. Then reason returned to me - and so did I return south to Virginia, knowing that somewhere out on the road, somewhere in the night was Dylan and his convoy headed south to Norfolk, to four more guys with short haircuts shouting "what is he singing!"

Here are my Twitter Posts - they read from the bottom up with the most recent at #1.
Here is Forgetful Heart - but please remember, this video is also from a cell phone so it's rough, rough, rough - but you can tell what song he's singing. And the point is that he sang it, it meant so very much. Thanks, Bob! You do rock!

What I want to know is how come shortly after any Episcopal event that you cover, there is something with Bob in the area?

Do you send him a schedule or something?

Have a GREAT time, I'm so happy for you.

I think you should send him your blog link. It should at least be worth a backstage tour if not a kiss.

Enjoy the concert. I'm listening to Together Through Life tonight and laughing about "My Wife's Home Town". Remind you of anyone?

Well there's reasons for that, and reasons for this
I can't think of any just now, but I know they exist
I'm sittin in the sun 'till my skin turns brown
I just wanna say that hell's my wife's home town
Home town, home town

She can make you steal, make you rob
Give you the hives, make you lose your job
Make things bad, she can make things worse
She got stuff more potent than a gypsy curse

One of these days I'll end up on the run
I'm pretty sure she'll make me kill someone
I'm going inside, roll the shutters down
I just wanna say that hell's my wife's home town

Well there's plenty to remember, plenty to forget
I still can remember the day we met
I lost my reasons a long ago
My love for her is all I know

State gone broke, the county's dry
Don't be lookin' at me with that evil eye
Keep on walking, don't be hanging around
I'm tellin you again that hell's my wife's home town
Home town, home town

Well, he sang Forgetful Heart, what more could I ask?

I have to say the entire setlist was a perfect follow-up to General Convention. Just makes you wonder.

Lucky BB! I am happy for you. I was flying home from Tampa when the concert was going on.
I'm so glad he did the prophetic All Along the Watchtower. Considering the way the U.S. has screwed Israel, he should also have done Neighborhood Bully, or Man of Peace, in honor of Obama. :)

Dylan the poet and the prophet. There's none like him.