Time Out: There and back again - and again! 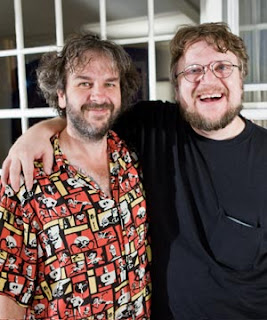 BB NOTE: Great news! Long time patrons of the cafe know that we like movies around here, a lot (okay, we like films too - but we love movies!) and we have some fun breaking news on the movie front this evening. Hold on to your rings. Bilbo Baggins is coming back! From Variety here by Dave McNary. All this and Jackson too.

Can we say yippeee?

In a major step forward on "The Hobbit," Guillermo del Toro has signed on to direct the New Line-MGM tentpole and its sequel.

Del Toro's moving to New Zealand for the next four years to work with Jackson and his Wingnut and Weta production teams. He'll direct the two films back to back, with the sequel dealing with the 60-year period between "The Hobbit" and "The Fellowship of the Ring," the first of the "Lord of the Rings" trilogy.

New Line is overseeing development and will manage production. Both pics are being co-produced and co-financed by New Line Cinema and MGM, with Warner Bros. distributing domestically and MGM handling international.

Del Toro won't leave for New Zealand immediately as he's still in post-production on U's "Hellboy 2," due out in July. His previous pic, "Pan's Labyrinth," was released through New Line's Picturehouse and set a record as the highest grossing Spanish language film in U.S. box office history.

The official signing of del Toro comes four months after New Line settled a lawsuit with Jackson over "The Lord of the Rings" profits and announced that it had agreed with MGM to turn J.R.R. Tolkien's "Hobbit" into two live-action films. Sam Raimi had been preceived as the initial front-runner as director but del Toro had emerged in recent months as the likely candidate.

The studios didn't give a start date on production and don't yet have a script. Though no screenplay deal's been set, it's expected that the "LOTR" scripting team of Jackson, Walsh and Philippa Boyens will collaborate with del Toro.

With del Toro blocking out four years for the project, it's likely that the studios are aiming at starting shooting next year and releasing the films in late 2011 and 2012.

Jackson's WETA stages, post-production and visual effects facilities -- built for "The Lord of the Rings" -- will be used for both films. And New Zealand will again be the site of Middle-earth, with the story centering on Bilbo Baggins taking the Ring of Power from Gollum.

For New Line, which generated close to $3 billion in worldwide grosses from "LOTR," the signing of del Toro's the first major talent attachment since the minimajor was folded into Warner Bros. on Feb. 29. The scaled-down New Line will be producing mostly genre pics along with the occasional tentpole -- such as "The Hobbit."

The announcement comes in the wake of moves by MGM's Parent to build up a homegrown slate via projects such as this week's $2 million spec deal for "The Zookeeper."

For del Toro, it's a chance to put his stamp on one of Hollywood's most premiere franchises. He'd been eyed as a likely helmer for "Halo" -- with Parent producing and Jackson and Walsh exec producing -- but that deal never materialized.

The Mexican director is specialized in fantasy, breaking into the biz in 1993 with "Cronos," followed by "Mimic," "The Devil's Backbone," "Blade II," "Hellboy" and "Pan's Labyrinth."

Read more about it here too.
Posted by Unknown at 10:33 PM

Great news!
I had been reading The Hobbit to my nine-year-old

but he does not yet have the patience for Tolkien's verbosity. (Instead, we are reading Genesis, which sparks his interest much more.)

Anyway, I rented "The Hobbit" from Netflix and we will watch it this weekend (having just finished the "Lord of the Rings" trilogy in the extended nine-hour-plus version). I have not seen this older animated film yet, but the reviews are generally good and I am looking forward to it.
Br_er Rabbit

Stupendous!! When I pause and think of how LOTR raised the bar for exellence, the Hobbit should be a head spinner.