No wonder it's taking so long 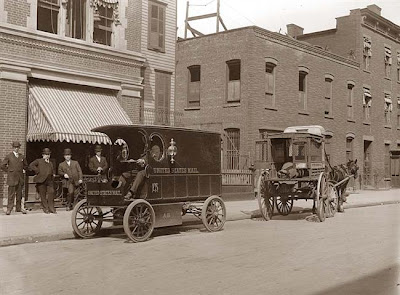 Dr. N.T. Wright, Bishop of Durham, said that Rowan Williams' letters to as yet unnamed bishops whom have been deemed non-supportive of the Windsor Report and the Anglican Covenant, have been posted and are, as we write, on their way to their recipients.

Whatever the case, the communications office of the Anglican Communion - that would be Jim Rosenthal - has told Jim Naughton of the Diocese of Washington, that "No additional letters have been sent to anyone at this point." Well, if they are stuck inside these buggies, that would explain a lot.

Seriously, though, tonight we have in one corner the Bishop of Durham, one of the most esteemed theologians in the Anglican Communion (he was also on the Lambeth Commission that wrote the Windsor Report), saying that the letters have been posted - and then we have in the other corner Jim Rosenthal, American-born Communications Officer for the Anglican Communion Office saying that they aren't actually in the post "at this point."

It sounds like the letters are being sent out, but there's been a delay. Are they stuck in the printer? Did someone find a typo? Are the addresses all correct? Did Rowan decide to take a time out and do a little research for another book at the British Library? For all we know, they are bagged and ready to go and just waiting for FedEx to arrive.

It seems fairly certain that there are letters - we haven't received a denial, just that the letters are stuck in the cog somewhere. Who has stuck them in what cog, we don't know. We do know that all five primates who serve on the Joint Standing Committee have not been notified.

Once again we consult The Hammersten Hierarchy of Human Behavior to glean what may be going on here.

As we recall, we have four possible reasons why we do not have agreement between the Bishop of Durham and the Anglican Communion Communications Office. Somewhere, somehow there has been an abundance of the following in the process. They are, in order:

Some are saying that Bishop Wright is engaging in wishful thinking, which would be #4 on the The Hammersten Hierarchy of Human Behavior scale. So perhaps we should just set that aside. It's possible, but it's unlikely.

Some are saying the letters are not in the mail due to some malevolence on the part of the Anglican Communion Office or Rowan Williams.

But as we see on our scale, that is also near the bottom. It's entirely likely, but before we jump to evil intentions, perhaps we should exhaust the first two choices. Step away from the tinfoil hat. At least for now.

That leaves us with laziness and stupidity. Now those are pretty harsh words created by a brilliant scientist who has to deal with governmental bureaucracy daily. But it's a good chance, due to Dr. Hammersten's brilliance, that the reason the letters are not in the mail is most probably due to reasons of 1) laziness ("oh, I decided to watch the football game rather than run the printer") or 2) stupidity ("oh, I don't actually know how to use the printer"). The truth is, the answer is probably a mixture of all four - when they all work together for naught, we have a Perfect Storm. But let's not be too quick to get out our brollies.

The fact remains - at least at this hour, that Jim Rosenthal has not yet put out a press release or a statement or held a news conference or called the Usual Suspects (except for Jim Naughton) and all he said was that the letters were not posted at this point - we are inclined to think that some snafu has happened in the pipeline (of course, if General Convention is any guide, our first thought is that it's the printer or the copier or both - did you forget to order more toner, are the sheets coming out looking like accordions?) and that - once they get the buggies reattached to the horses - the letters will be posted and the Bishop of Durham can sigh with relief.

Having come so quickly and so fiercely to Canterbury's defense when many were fleeing, perhaps the time has come for Canterbury to come to Durham's defense now. We shall see.

For now, we stand and watch and pray "at this most difficult and fraught moment" for the one sending those letters and the ones receiving them, whomever they may be, whenever that may be. Pax Vobiscum.
Posted by Unknown at 8:58 PM

Which split screen represents most closely the total number of "anglican" groupings will exist after all defence of the Anglican Tradition is abandoned by the Instruments of Diversity in the Unity of the New Thang(c) ECUSA/TEC/GCC/EO go-away-spell?

BB, conflict/conflictedness is a prime reason for human behavior or the lack of action and decision - that's an important one your brilliant beaurocrat didn't list...my official vote is - frozen for lack of convictions (love for Christ) sufficient to overcome conflict with TEC and his own inner conflictedness as the reason the the letters are not in the mail.

Well, at least he didn't say "the check is in the mail."
Perhaps the letter bag has been "lost" somewhere in the ACI? :-) Or it's a bank holiday?

I appreciate you, Babyblue.

Having closely examined the photo, I believe I have discovered at least a part of the problem. Stan Laurel and Oliver Hardy are among the postal supervisors dispatching the mail.
Br_er Rabbit

If you look closely, you can see the chain drive for the left rear wheel - showing that the postal truck is mechanized.