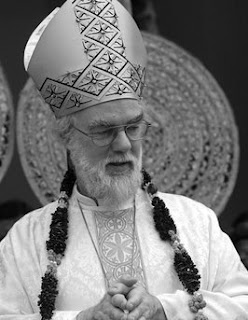 "I think the more you have a disproportion between what people are actually earning and what they appear to be worth, the more you have astronomical sums with very little rationale behind them, the less credibility the whole thing has."
-Rowan Williams, Archbishop of Canterbury Friday, April 25, 2008

BBC - Your critics would say that's a pretty old fashioned kind of Marxism.

Williams - My critics might say that, but I think I'd be quite happy to say that seems to me how we run a society that's confident with itself and believes in itself. 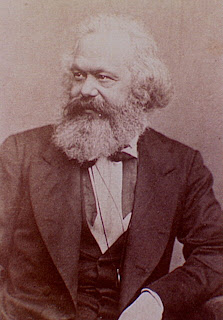 Is that what we really want? A "society" that is "confident" with "itself," a "society" that "believes" in "itself?" What is a society, sir? You make it sound like it's some Giant Blob, with no face, no personality, no character, no people - no individuals, no heart, no soul, no feeling, no passions, no person, no choice - just something blob-like, this "society."

Well who is society? Is it faceless? No, what matters are families and the individuals who live in those families, who make up our neighborhoods and towns, who have choice and dreams and hopes - and yearn for something more.

America is filled with people who yearn for this freedom. Why, even the British are immigrating to America again.

If the Church is incapable of teaching moral and ethical principles as we are discipled to be followers of Jesus (not Marx), then how the hell can we expect a society to be anything different than what it is?

Redistribution of wealth is a failure. Ask all those people who yearned for freedom in what was once the Soviet Union. For heavens sake, sir, get out of your comfy chair form behind your palace walls and out into the real world. Start a business - with your own money for once in your life.

Freedom is essential for a healthy society. But if the Church is silent on preaching the Good News of Jesus Christ and instead sells its own soul to the "spirit of the age" which runs rampant in our society, how can anyone stand there and point a finger raising up Karl Marx from the grave and imposing him as some kind of savior to a society that is decaying into decadence and greed?

It is obvious, sir, that you have never actually worked in the real world - stuffed inside Academia for twenty years, thirty years, now you are stuffed inside a palace pointing fingers and ignoring your own rampant crisis of decadence under your own nose.

If you can't manage the Church why would anyone think that your ideas about corporate finance matter? What matters is not a "confident society" or the "redistribution of wealth" - but repentance. Personal repentance. Preach repentance, sir - and then let's see what happens.

And how about starting with our own House first.
Posted by Unknown at 4:51 PM

Don't you just hate it when ++Rowen puts on his thinking cap and bloviates. He was doing so much better when he said little outside his real baileywick and folks could think he was smart because he wrote in such an unclear and abstruse manner. But when he puts out stuff like this all the past illusions of intellect goes up in smoke.

Seeing as how your wealthy, neo-conservative church's first corporate action was to try and hang on to the property, I don't think you have anything to say when it comes to materialism or the plight of the poor.

The problem is not repentance, it's people too blind to see the plank in their own eye because they're worried about the speck in someone else's. Those people can't repent and never will.

There's an econ guy in my small group who we banter about this subject. He has a fun take, one which I've struggled against to find a good counter.

Industrial Capitalism that Marx foundation opposed, is at it's heart greed and exploitation. I disagree with Marx at almost every level (especially about religion being a monkey on society's back) but he was very observant in processes that made up ninetieths century economiocs.

My friend argues that any econ system must account for external variables that effect the market. Our problem is that we're fallen so discount many of them. Since the Scripture is true, if what will make us ultimately happy is also what the Lord commands than any true capitalistic system must take into account God's commands for care of the poor and exploited, else it will not produce the ultimate long term gain thus a flawed system.

Somehow it has a tinge of works-based righteousness to it, but we were bantering economic theory not theology at the time. I throw that little bit out into the mix.

Anon #1, that's not really honest... bb's church wanted somewhere to worship. They didn't want to "donate" their property to a wealthy, limousine liberal "church". Have you given all you have to the poor and followed Jesus? It sounds like you have a few logs of your own to deal with...

Someone needs to put a hefty slug of chloroform in the ABC's aftershave - quick!!!

We are in a time in history where there is a lot of newly created astronomical wealth. I don't think very many people are questioning whether the money made through investments in new technologies is deserved.
However, there is a reason people talk about new rich versus old rich. With astronomical wealth comes an expectation of responsibility.
I would expect a Christian leader to be emphasizing the Christian message regarding responsible care for others rather than questioning the right to the newly created wealth. He comes across as a naive Marxist, not a wise Christian leader.

Exactly, perpetua! I think I popped my cork because I do think there is a major issue here - the crisis is not just financial and it's not just political or social - it's theological, spiritual - a matter of the heart, and not just "markets." People are making decisions as though there is no tomorrow - as though the world is about to explode and they are going to make as much as possible without regard to the implications their exploitation will have on not just "the" - but "their" local community.

Instead, we get more failed Marxist ideological exhorations, rather than getting at the heart of the spiritual battle. People are filled with a God-shaped hole inside them and without God will fill it with anything and everything else - including debauchery and greed.

Jesus did not come to condemn the world but that the world may be saved through Him. Preach Jesus not more failed economic and financial ideas from another century where the government takes the place for individual common sense.

Aim for the human heart, not some Blob-thing called "society." Talk about families and neighborhoods or for God's sake your Country - but put this "society" Blob-stuff to rest. No one changes "society" - that stuff failed years ago. No, what we change is ourselves. We make better choices when we are grounded in truth.

I remember when Ronald Reagan was giving his speeches, he didn't talk about changing the Big Blob Society. In fact, having been once enamored with the Great Society himself, he realized that it was just a bunch utopian marxist barf bagisms.

Instead he spoke to people, he talked to individuals, he told stories about individuals who did heroic things, he talked about families and communities and our neighborhoods - and he talked our country. He got personal. He talked directly to us. "Society" ain't personal. It's a blob.

Marxism despises the personal. That an Archbishop of Canterbury stands up, with no business experience of his own, and once again places that foot of his back in his mouth - well, I again wonder who his staff is!

Does he have a staff? Does he get to hire his own staff? Does he ever talk to them? Do they tell him, "oh great idea, your Grace - let's just follow up that Sharia Law unpleasantness with a little Karl Marx. Great idea! Go for it! That'll show them!"

Oh, bb, that last paragraph is so funny!

Unfortunately the Rev Jonathan Edwards, the ABC's press secretary has just moved on. No news of a successor so bb's last paragraph is probably spot on.

We have seen the first fruits of Rev Jennings move in the letter shambles. Stay tuned for more from Planet Zog!

So, Pageantmaster, you're confirming that we are our own worse enemies? Still he is married, maybe he should consider running some of this past his wife ...

May the Lord richly bless those he our in our lives to save us from ourselves!!

What ++Rowan seems to be talking about seems to be little more than taking another look at the labor theory of value or at least correcting for some of the seemingly disproportionate manner in which some are compensated for their labor. A good example would be the golden parachutes provided for executives even as employees are deprived of pensions etc... that they had come to depend upon (whether it was smart for them to do so or not).

It would be wrong to confuse such concerns with Marxism since such a view of value--right or wrong--predates Marx and is in fact inherent in some forms of American thought, such as Southern and Midwestern Populism which tended to be protected against the deprivations of Marxism and Communism by the emphasis on the yeoman farmer and individualism/self-sufficiency as opposed to collectivism or redistribution.