Presiding Bishop tells the press "The controversy isn't that big." 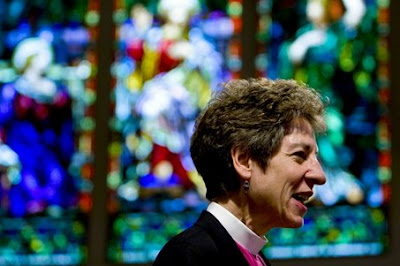 The Oregonian asks Katharine Jefferts Schori about the crisis that is tearing apart the Anglican Communion at its seams, leading four Episcopal Dioceses to leave The Episcopal Church and the formation of a new Anglican province in North America later this month while TEC spends millions in the courts:

A: That's a good thing. The controversy isn't that big; it's just noisy in some places.

Was I mistaken, I thought I heard a noise from NH.

I was mistaken, the noise was from the big book of gas... er, I meant "resolutions" crying for the General Convention to pass.

Noisy gas = bad. There is only one thing worse.

Crisis, what crisis? By the way, lets move the deck chairs over here where we can see those lovely fireworks cast their light on those delightful icebergs...

I find it revealing that her criteria for what makes an ideal bishop, as quoted in this interview with the Oregonian, does not include maintaining the purity of the gospel of Christ, spreading it to all the world and setting an example by living in accordance with its precepts.

Q: "... a profile for an ideal bishop. As a former Oregonian, what sort of bishop would be a good fit?

A: Leaders who are able and interested in working collaboratively, who understand different models of being church. Creative and motivated leaders who will support people's own lay ministry."

She is talking about a bishop for crying out loud, not an office manager.

Methinks she doth protest too much...

Denial is not a river in Egypt.

You can read my thoughts on the "no big deal" claim of our revisionists friends at the Deacon's Slant.

Of course it's no big deal in those dioceses and pockets of TEC that are struggling for survival. They have been too conditioned to grease wheels and be in denial to know reality.

Interestingly, Schori won't admit that the eruptions are from the growing and vital segments of the Church...where she isn't relevant or of much necessity.

She lost four dioceses; so what does she think a 'big' controversy would be?

If the endowment takes another big hit.

The crime was murder "one," guess who testified?
Bello and Bradley and they both baldly lied
And the newspapers, they all went along for the ride.

How right she speaks! In the last two plus years since our church split I have not heard more than three comments from pew sitters about "the crisis."
It is a none topic with us. Growing our parish and loving our neighbor are far more important.

I think part of your difficulty with the PB's comments is reflected in your alternation of her language the second time. She said "models" not "levels." In 1974, quite a bit more than 20 years ago, Avery Dulles, a distinguished Jesuit theolgian, published "Models of the Church," a book which has been revised and reprinted over the years and remains one of the most insightful books about the varied ways that the Church has been the Church. God doesn't, IMV, want cookie-cutter churches anymore than cookie-cutter Christians.