On the Road Again: Heading out to Ft. Worth 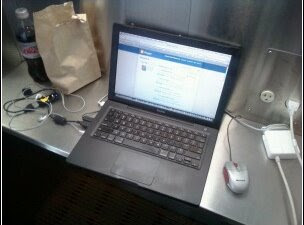 I'm here at Reagan National Airport in DC waiting for my flight to Dallas/Ft. Worth. Right now it appears that the plane is full and they are taking volunteers to give up their seats, but the flights they are offering are for much later tonight. I'm waiting for friends, though, and wonder if they may be seatless?

I haven't been to Ft. Worth - I've technically been to Dallas, but really all I saw was the airport and the hotel. That was for "Plano/Dallas" in 2003 following the rather catastrophic Minneapolis General Convention when thousands of Episcopalians descended for the historic meeting in Dallas. Originally it had been slated to be in Plano, but the numbers quickly grew overwhelming the venue there and was moved to a hotel in Dallas.

The new Anglican Church of North America is launching their Assembly in Ft. Worth - actually in Bedford, Texas. Yesterday the ACNA Governance Task Force was slated to meet to go over the proposed Constitution and Canons after receiving more input and review from local parishes and what may eventually be dioceses in ACNA. It will be interesting to see what modifications they make after the review.

I'll be posting reports here at the cafe, as well as videos and photos and I plan to try out "Live TV" while in Ft. Worth on Ustream or another provider where you can also participate via twitter or live chat as well as video. This will be a testing time so it could prove interesting! Stay tuned!

Friends have not yet arrived - I hope they are not seatless! Stay tuned for reports of the drama as we report here at the Cafe!
Posted by Unknown at 7:38 AM

Safe journey, Baby Blue. And welcome in advance to Texas. Look for me around the Middle School building--the hub of all Assembly activity (other than worship!). Randall "Texanglican" Foster+, Chaplain, St. Vincent's School, Bedford, Texas.

Hope to see you tomorrow evening at the SF dinner. Have a safe trip to Texas.

Looking forward to read your fair and balanced reporting. Have a good time too.

I'll be interested to see if the GTF makes an substantive changes in the proposed constitution and code of canons. I would prefer to see a moratorium on their ratification until they have been thoroughly examined and studied and much needed revisions carefully thought out and made.

Doctrinally both the constitution and canons are unnecessarily partisan in their tone. More neutral language could have been used where they touch key issues that divide Anglo-Catholics and evangelicals. They also undo the gains that Anglican laypersons have made in the goverance of the church and the selection of church leaders over the past 225 odd years. They lack detail, clarity, and preciseness where detail, clarity, and preciseness are needed. They are missing important checks and balances and safeguards. A number of provisions that are usually found in canons are noticably absent. They need a lot of more work.

The Heritage Anglican Network has more on the subject of the constitution and canons on the Internet at: http://theheritageanglicannetwork.blogspot.com/

Somehow I missed this post of yours saying that you were coming to North Texas. I'll come introduce myself to you tomorrow. (I have a press badge too! ;)