On the the Floor of the ACNA Provincial Assembly 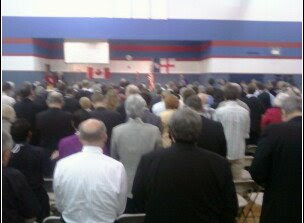 I'm here on the floor of the inaugural session of the ACNA Provincial Assembly. Right now the delegates are milling about, we're running a bit behind - probably because everyone is so busy reconnecting with old friends, like a family reunion. The buzz in the room is fairly loud, as people reach across aisles and embrace one another, like a reunion of veterans.

Many of the faces here are indeed veterans from many General Conventions of the Episcopal Church. Now the shoe is on the other foot, as it were, with the leadership here charged with governing. I am reminded of the famous quote from Ben Franklin at the founding of the American republic. He was outside Independence Hall in Philadelphia as the first Constitutional Convention in 1787 came to end. A woman came up to him and said, "Well, Doctor, what have we got - a republic or a monarchy?" to which Dr. Franklin responded, "A republic, if you can keep it."

What we may have here is a church, if we can keep it. To God be the glory.

2:52 p.m. - We are getting announcements about parking and shuttles to hotels. Bob Duncan is up at the head table and welcoming the delegates and guests. He is acknowledging bishops and guests from other nations and dioceses, including from Southeast Asia, Nigeria, Uganda, North Africa (Egypt), England, and the Archbishop of Canterbury's Pastoral Visitor, Santosh Marray. There is also a representative from the Diocese of South Carolina as well as greetings from several bishops in the Church of England. Archbishop Venables left this morning for a clergy conference back in Buenos Aires.

The "corrections and changes" to the ACNA Constitution and Canons are being handed out right now. Bishop Duncan is announcing the election of new bishops for Canada, as well as AMiA.

Bishop Duncan is now outlining the transition of the Common Cause council of leadership to the new ACNA Council.

I am reading through the "amended sections of the ACNA Canons" and it looks as though the changes are minor.

Hugo Blankingship has been appointed the chancellor of the Assembly. On the dias is the recording secretary, the secretary of assembly, the chancellor, and Bishop Duncan.

3:15 p.m. The are now taking out the Rules of Order for the meeting.

It seems that Bishop Duncan is recommending that if there are parts of the Constitution and Canons would like to change, that it may be best to send it back to the Council rather than try to "perfect" it on the floor of the Assembly.

Bishop Duncan is calling the delegates to look at the proposed ACNA Constitution. You can read the Constitution here. The are beginning with the preamble.

We are grieved by the current state of brokenness within the Anglican Communion prompted by those who have embraced erroneous teaching and who have rejected a repeated call to repentance.

Bishop Duncan asked if there was anyone who wants to speak in favor of it and Phil Ashey takes the mic that it should remain, thinking of the section that follows it since they are connected.

Neil Lebhar from what might be the Diocese of North Florida (in formation) - reminds the assembly that nothing will be rejected, just sent back to the council. Adopt it first without the disputed clause and then ask whether the Assembly should accept the clause. Neil Lebhar speaks to sending both paragraphs back to Council, including the following one.

Bishop Duncan rules that both are not joined together and suggested that they take each section one at a time. Diocese of Pittsburgh also speaks in favor of deleting both four and five paragraphs.

Bishop Bena spoke to keeping the paragraphs 4-5. Bob Duncan called for a vote. Overwhelming vote in favor, with paragraphs 4-5 a minority voting no, which I would presume included delegates the Dioceses of Ft. Worth, Pittsburgh, and Northern Florida in formation. 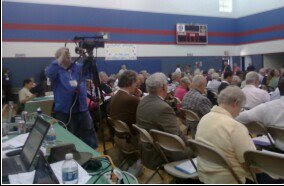 3:40 Provincial Council spent time last night seeking whether they could tweak the foundation principles and they found that it would open it all up, but for one section, where they agreed to change the Constitution to say that there are seven principles, not eight since the Jerusalem Declaration in now addressed in the canons.

6. We receive The Book of Common Prayer as set forth by the Church of England in 1662, together with the Ordinal attached to the same, as a standard for Anglican doctrine and discipline, and, with the Books which preceded it, as the standard for the Anglican tradition of worship.

7. We receive the Thirty-Nine Articles of Religion of 1571, taken in their literal and grammatical sense, as expressing the Anglican response to certain doctrinal issues controverted at that time, and as expressing fundamental principles of authentic Anglican belief.

The mission of the Province is so to present Jesus Christ in the power of the Holy Spirit that people everywhere will come to put their trust in God through Him, know Him as Savior and serve Him as Lord in the fellowship of the Church. The chief agents of this mission to extend the Kingdom of God are the people of God.

The substitution now is "The mission of the Province is so to extend the Kingdom of God by so presenting Jesus Christ..." as a way of strengthening a more Trinitarian language into the Article.

There is now a short break to here about mission opportunities. Bishop Bena is talking about healing opportunities for Armed Services personnel with three-day Christian retreats, including issues of combat stress.

Article VII is adopted, with a minor change of changing the method from the Constitution.

Article IX has a change: Adds a setence "and carries out such other duties and responsibilities as may be provided by canon," regarding the role of the Archbishop.

Another break on mission.

Another slight change in Article X where the phrase "one quarter of" before the phrase "the episcopal members of the Provincial Council." A question has asked if the diocese will decide who are the active and non-active bishops. Bishop Duncan said the dioceses make that determination.

Article X and XI are adopted. Now attention turns to the Article on Property (Article XII) which is resoundly and loudly adopted.

Article XIII with a minor correction (changing the word "agree" to "agrees) is adopted.

We now move to the Final Article, but someon has risen from his chair and gone to the mic for Article XV. The delegate is from the Reformed Episcopal Church (North Eastern Canada). Says that it seems inconsistent with how it had been represented. The chancellor says that there is clarity in a canon. The Final Article is is ratified with one nay.

The session ends with standing ovation and the doxology.

Sounds like there's a "let's get moving" mood at the assembly?

BB, I didn't know you were going to be there. I'll have to look for you tomorrow. Are you a visitor or press person?

Was there any discussion whatsoever on changing the wording for fundamental declaration 1.3 to accommodate those Anglicans that hold to the bene esse position on bishops?

Any discussion on the possibility of returning the affirmation of the JD to the eighth fundamental declaration?

Any discussion on the "and the books that precede it" on 1.6?

I think that topic will come up as the ACNA Assembly tackles the Canons!

Webdac, +Duncan said there had been two hours of discussions among the bishops last night about possible changes to the Theological Statement. Some people, he said, think the Statement is too Catholic, some too Evangelical (none apparently think it too Charismatic!). I imagine the bene esse issue was one of the "too Catholic" objections talked about. But in the end the bishops decided to recommend sending the Statement to the Assembly "as is." If attempts had been made to "tweak" something that every group in Common Cause had already endorsed previously at this Assembly, it risked open up a can of worms here (my words, not +Duncan's, but that seemed his clear implication). So the Theological Statement article of the Constitution was accepted overwhelmingly with very few "no" voice votes. I think everyone is just ready to "get on with it" and is willing to wait for later, considered revision down the road.

I found the video and saw it - awesome that it's available.

May I suggest that the "too evangelical" objection was simply a counter-objection to the "too Catholic objection." The Fundamental Declarations may not go as far as some Catholics would like them to go such as recognition of all the teachings of the first seven General Councils and omission of any reference to the Thirty-Nine Articles, the 1662 Prayer Book, the 1661 Ordinal but they can hardly be characterized as "too evangelical."

I do not expect to see any substantive changes made in the two documents. I also expect the Assembly to ratify the canons in the excitement of the moment. The way it is set up makes it vulnerable to that dynamic, as well as to manipulation by persuasive charismatic speakers and experienced lobbyists. When I heard the congregation's reaction to Bishop Duncan's sermon at the opening Eucharist, it confirmed what I had anticipated was going to happen.

As soon as the constitution and canons in their adopted versions are available, please post them on the Internet or director your readers to where they are posted. I have been asked to write an article on them.