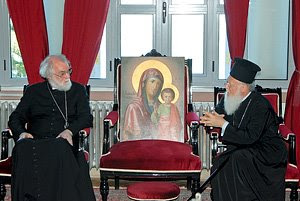 How do you evaluate the meetings you had at the Ecumenical Patriarchate during your present stay at the Phanar?

"It has been a wonderful couple of days; we have had an opportunity to talk with several people at the Phanar about our ecumenical relations, about our hopes, our anxieties because both of churches are facing considerable problems at the moment. We talked very honestly and very helpful about that and it has been an immense privilege and joy to be with the Patriarch, to spend personal time with him and to share in worship with him, it is always a gift to which I am very grateful to be here."

How do you characterize the course of dialogue between the Anglican and Orthodox Churches?

"We are planning the next round of the dialogue, the document that has come out so far, from the dialogue over the last maybe twenty years has already had a very positive impact in many ways. We now begin on a new course of work which starts later this year thinking about the Christian doctrine of human nature. We have our membership lined up; we have our subject matter defined, so I think the prospects are very good."

Last year (2008), the Time Magazine chose the Ecumenical Patriarch as one of the 100 most influential people in the world. At that time you wrote about the personality of the Patriarch that he is "an Eastern Orthodox leader that defines environmentalism as a spiritual responsibility" among Leaders and Revolutionaries.

"I have heard the Ecumenical Patriarch's name was one of those being talked about, and because I so greatly admire him as a theologian and as a pastor and as a person, I felt that it was a privilege to be able to say something in praise of him and the way in which he has I think created a role for the Ecumenical Patriarchate worldwide by teaching his teaching/ advocacy on environmental matters and the Christian approach to environmental questions, that has been a great example to many of us."

As a one-time member of TEC and now a member of the Orthodox Church in America (OCA) I would like to point out that Cantor's is trying to further ecumenical relations with an Ecumenical Patriarch who has in the past tacitly, if not openly, cozied up to pro-abortion senator Sarbanes. See the article at http://www.orthodoxytoday.org/articles/EstocinSarbannes.shtml.

Further, the new Metropolitan of the OCA told the ACNA Convention that we are dropping ecumenical relations with the TEC and transferring that effort to ACNA. As an aside, The Ecumenical Patriarch has not formally recognized the Autocephaly (independence) of the OCA.

This meeting for prayer and theological reflection has the smell of Church Politics.

The worship did not include receiving Communion together since these two jurisdictions are NOT in communion.

I like your posting article on Archbishop of Canterbury meets with Eastern Orthodox Ecumenical Patriarchate in Phanar.

Given +Rowan Williams ill-consideration of Holy Tradition and his complacent support of innovations that oppose Holy Tradition, nothing can come of such "conversations".