Archbishop of Canterbury will not preach at the General Convention Eucharist 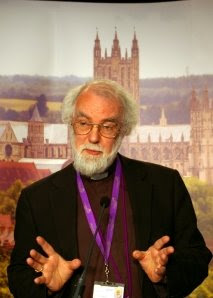 Note, however, how an earlier report noted that both Katharine Jefferts Schori and Bonnie Anderson would be preachers at a "worship service," while Rowan Williams will only conduct a "Bible Study." The Eucharist and United Thank Offering, which has usually been the venue for the Archbishop of Canterbury to preach, will have the Presiding Bishop be both celebrant and preacher. A no-show then for the Archbishop of Canterbury.

Rowan Williams will be one of many speakers at the non-ecclesiastical event, "Christian Faithfulness in the Global Economic Crisis" in Anaheim.

"While I don't want to make too much of this point," Jim Naughton of Episcopal Cafe wrote earlier this year, "the fact is that Rowan Williams has kept his liturgical distance from the Episcopal Church since the consecration of Gene Robinson. He has never worshipped at a church in the Diocese of Washington, despite frequent week-long visits to Georgetown University (where he sometimes invites guests to a Eucharist in a private chapel followed by breakfast.) He lived a stone's throw from three of our church a couple of summers ago while he was on Sabbatical, yet never visited one of them. He turned down an invitation to participate in the year-long 100th anniversary celebration of the National Cathedral. It doesn't seem to me too much of a leap to conclude that for one reason or another he'd prefer not to be seen associating too closely with Episcopalians in any sort of voluntary, un-official, what-choice-did-I-have kind of way."

"No doubt he has his reasons," Jim Naughton wrote.

The point is, at least this time, that Rowan Williams was not invited to celebrate the Eucharist at General Convention by Katharine Jefferts Schori and Bonnie Anderson. And at the end of the day, that remains the point.
Posted by Unknown at 1:56 PM

bb, it seems a leap to say Dr. Williams wasn't invited by the PB to preach. The most I thnk one can conclude is that he won't be preaching. I think the Archbishop's relationship with ECUSA is strained, but I would not lay reponsibility for that at any one person's door.

I believe it is the Presiding Bishop who responsible for making the official invitation to the Archbishop of Canterbury to General Convention. It is unprecedented that is he not preaching at the Eucharist. Whether he wasn't invited to do so was because TEC knew he would not wish to do so, or he was not invited to do so because of TEC's own internal issues, or both is probably anyone's guess.

No doubt Rowan does have his reasons. No doubt Jim Naughton knows very well what they are.