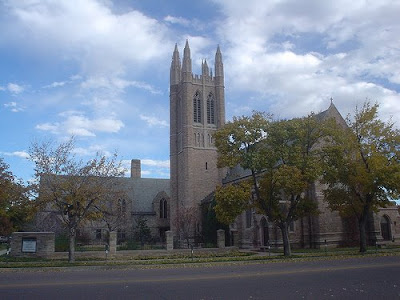 “We are pleased with the settlement, particularly since it relieved our staff and vestry members of the burden and expense of defending against $5 million in unjustified claims brought against them personally by the Diocese of Colorado and The Episcopal Church.

“The settlement reached also means that all the costs associated with maintaining the property of Grace Church and St. Stephens, including payment of the $2,500,000 mortgage, belong to the Episcopal congregation and the Diocese of Colorado.

“Our only remaining obligation is to pay final operational expenses we had incurred during our possession of the property, but were unauthorized to pay until this settled agreement was reached.

“We look forward to fulfilling God’s call to us for mission and ministry.”

The Episcopal Diocese of Colorado and former members have ended their fight over the historic downtown Colorado Springs church, the diocese announced Tuesday.

The decision ends two years of legal struggle over the $17 million Grace Church and St. Stephen's Parish buildings, as well as a number of associated disputes of trusts and other matters associated with their 2007 split.

In March, El Paso County District Judge Larry Schwartz turned the property back to the diocese, relocating about 1,200 former members.

The Colorado Gazette reports that "Diocese officials also said Tuesday that both sides have agreed to dismiss all damage claims and that each side will pay its own attorneys' fees."

The case against the rector Don Armstrong is still pending.

Another settlement without details - although maybe the damage claims were the last remaining items.

Of course there is still the remaining effort by DioCO to ruin +Armstrong...

If Fr. Armstrong is found guilty of embezzlement, it won't be the fault of the Diocese of Colorado.

I supposed we can be assured that God knows exactly what's going on, even if we are at a loss.

Quite so, Fr Weir.

Sounds like a fair settlement. The departing congregation pays for its use of the property following the vote favoring departure, the continuing Episcopalians can return to their church and each side deals with its own attorneys fees. Except for that last negative element, everyone gets on with the business of worshipping God. I look forward to this disposition in divided Virginia parishes.

Buildings don't matter......I don't remember the Lord putting up any fancy shelters......we have much more important stuff to do than worry about buildings.....maybe we are being cleansed of burdens and distractions!

I just hope the building is not sold to a chicken or coffee joint too quickly....as TECUSA cannot fill it with so few coming to hear about the "new thing" they have made up.

Ah Yes.
What joy for the pension-dependent hirelings who run TEC these days.

Having so little skill in the much-vaunted "Via Media" seems to be painfully apparent as TEC shrinks itself into a crude joke month by month.

WE WON!, yells TEC's worst leaders as they press to scoop up all the toys (property)...and yet they just can't keep or inspire many people. The stink of death hasn't phased them yet because it is so strong from within themselves that they can't detect it when it is spreading around them.

Where are all of the LGBT, etc., etc., etc. (insert your own abberation) that were supposed to become attracted to TEC due to its Simple Country Bishop of NH, and nearly unconcerned position on anything sexual? Don't see the churches filling up. Quite the opposite...in spades no less. Yet, TEC's hireling priests keep pushing the majority out to cater to a speck of the population that doesn't care about religion.

And, why couldn't you hirelings get that other job, and instead decide to become a liberal priest?

I may be wrong but I believe BB is still in the lead as far as timely reporting goes - were you first to post?? ettu PS I never did find that hairshirt I mentioned after I was taken to task by a poster for my prior post praising BB's "first" on a controversial news article

Anonymous ask for details; here are some:
http://www.graceststephensepiscopal.org/Legal/20090605---settle.pdf