From here. And think about it. 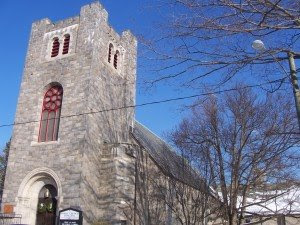 WATERTOWN, Conn. -- Christ Episcopal Church in Watertown has seen everything, from baptisms to weddings to funerals, but after centuries of services, it's saying goodbye.

But worshippers at the church, which can be seen from anywhere on the Watertown Green and dates back to the 18th century, were told Sunday that the church is closing.

"It's pretty much part of Watertown," resident Judy Charbonneau said. "It's been here for years."

The decision to close the church came from the Episcopal Diocese of Connecticut.

"We're closing access to a building for fiscal prudence, and at the same time are working with the faith community of 30 or so folks to discern their next steps as a group in a variety of possible formations and settings," the diocese said in a statement. 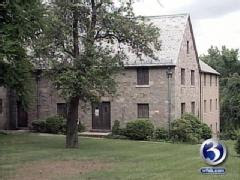 "It's simply that the congregation has not grown rapidly enough in a short time to be where it needed to be to take things over," Kemmerer said.

He said the church had split off from the main congregation because of the national Episcopal Church's stance on gays and other issues. When that happened, he said, there were about three parishioners left. Now there are about 40.

The church would need more than 200 to be able to make ends meet, Kemmerer said. He said he plans to make that happen, even if it's under a different roof.

Kevin Kallsen of Anglican TV is one of the people at the new Anglican church, New Hope Anglican. He's senior warden there.

Very sorry (but not surprised) to see this. However, where's the story about New Hope Anglican (the congregation that left TEO)? They're still going strong while the "stayers" couldn't make a go of it.

I spent about three weeks at this church in 1983 when I was a fresh-from-grad-school Physicist taking a course on teaching Advanced Placement Computer Science held at The Taft School in Watertown. I was preparing for my first job at a private school in the Boston area. The congregation was a blessing to a young (23 years old) married man (1.5 years) who came to faith (in 1981) through a charasmatic evangelical Episcopal parish on Long Island. Even then, I was worried about how few and far between parishes were that cleaved to the Lord as He reveals Himself in Scripture. Needless to say, it wasn't the beautiful building, but breaking bread with the people in love with the Lord and obedient to Him that ministered to me.

I left TEO in 2006 after fighting on lots of little stone bridges and we've been part of a thriving evangelical church that is obedient to the Father and isn't ashamed of Jesus and the Holy Spirit. There's more in common among Christians obedient to and indwelt by the Lord than will be found among "co-denominationists" who are in open rebellion and possessed/oppressed by other spirits.

I hope that New Hope Anglican discerns whether their next step is to establish an Anglican Church in the historic building. I don't really care about the stones, but the kids at Taft (a boarding school) and their teachers could use a vibrant witness to the Lord on their doorstep.

Of course, after buying the building they might need an exorcism and reconsecration to drive off the TEO effluvium :-)

Peace to all of you New Hopers in the Name of the Lord Jesus...

Andy said...
This comment has been removed by the author.
9:56 AM

I imagine that this is a story that waiting to be reported throughout multiple Dioceses throughout the greater TEC. I surmise that hundreds of parishes are beginning the hand wringing and sweating as the legacy endowments are beginning to trickle out their last dollars.

This is a tragedy that could have been averted had the TEC bishops enclined their hearts towards the eternal, unchanging heart of God rather than the, vapid, everchanging voice of popular opinions

The article isn't clear - did most of the congregation leave Christ Episcopal and start a new church? And there were three people who wanted to stay with TEC?

I suspect that there are or will be some ACNA plants who could take over the old building and make it grow. The question is, would the local TEO be willing to sell it to them? By most reports of other such cases, no.

The overriding goal of KJS is to protect the franchise. She has stated publicly that TEC will not allow these buildings to be sold to Anglicans outside of TEC.

It is very sad Christ Church Parish is closing their doors after almost 250 years, however, the real tragedy is that Christ Church is one of hundreds of Episcopal Churches closing every year because the national church adopted a strategy of “spiritual violence” and has actively adopted heresy over sixteen hundred years of sound Biblical teaching from the Anglican Communion.

Clearly people are migrating to churches where the clergy believes in a personal God and our willing to defend the faith. This can be confirmed by the data The Episcopal Church has published about their average Sunday attendance: From 2002-2007 TEC has lost 118,818 parishioners (-14% DECREASE). Local newspapers around the country are filled with similar TEC should expect another double-digit decrease for the years 2008-2009.

This entire things makes me ill. And I'm neither Episcopal or Anglican.

I don't like to read news anymore. I can't do anything about it and it all just makes me sad....

...I need some sand to stick my head in.

My guess is that the Diocese of Connecticut would pay hundreds of thousands of dollars for demolition rather than sell the building to an Anglican congregation.

For every ECUSA church that closes, the Gospel is proclaimed!

For every Apostate congregation that is closed, the Gospel is proclaimed!

Had these people followed Christ, not ECUSA, their church would be open and growing.

As it is, they have left the vine, they have been cut off and thrown to the fire, and burned; they have shriveled as the fig tree that bore no figs.

We rejoice that the prophies have come true
and that the enemies of Christ have been put to the sword, to fire and flame, to damnation, and the ground sewn with salt!

If we did not rejoice
when the greatness of Christ was made known
the stones themselves would cry out!

Kevin: what is the "heresy" that the Episcopal Church has "actively adopted"? This is news to me. I was unaware that the doctrine of the Episcopal Church in the United States has embraced heresy during my lifetime. Spare me anecdotes of looney individuals (Zen Buddhists in the North Woods, etc.) Let's hear about real heresy at official, doctrinal levels.

By denying the created order - male and female - they deny creator, God.

Anonymous #4 (it would be so much easier if you guys had names!)

I understand your joy. Really I do.
But...

Have you no regard for the souls of those people? Shouldn't you pray for them to return to the vine?

Have you no concern about the witness that this is making to the world? The world will not see this as you do - they will see that Christians don't love each other - they quarrel and backbite and rejoice in another's suffering.

While you may disagree on their acceptance of the Robinson ordination (and I must say I agree with you - but then, I left TEC long before in 1996 when the heresy charges against Righter were dismissed!), you have no idea what their individual hearts contain! Those people have confessed the Nicene Creed, just like you. If they truly believe it, they may be wrong on the peripheria of beliefs, but the core is right and that is all that matters in the end. Only God can judge them!

That's why you don't argue about blood transfusions with a Jehovah's Witness - they may be absolutely right about that - and we may be absolutely wrong! But proper belief about blood transfusion is not what saves a person. It is a proper faith in Jesus as Savior, only Son of God, His redeeming work on the cross, and His glorious resurrection. We need to remember this and pray for God's mercy for us all!


All that having been said, I wonder if there is some "shadow" congregation that might buy the property and then sell it to an Anglican community?

If I were a multi-millionare, I might go into a business like that - buying old Episcopal buildings and then selling them, not to night clubs (like the Abbey in Atlanta) but to Anglican congregations who need a place to call their own.

This episode high lights the wisdom of the Virginia law that assigns the property to the majority portion of the congregation when there is a split. The local government has a vested interest in church property because the majority members of the split congregation is forced to establish a new facility, thus taking property off the tax roles and creating problems with access and parking for the new facility. And, an empty historic building in a prominent part of the city is left to deteriorate with no funding source to maintain it. Thus, a law like the Virginia one is needed every where, not just in Virginia.

I doubt that the drafters of the Virginia law were worried about parking and access. The law was a very direct reflection of Civil War-era tensions between certain congregations and the national churches (primarily Presbyterian, is my understanding). Access and parking probably was no more complicated than where one locates the hitching posts.

The establishment of a new facility by departing members needn't cause the old one to deteriorate. It will be either maintained and occupied by those who stay, or it will be purchased by another denomination for its use.

I don't much like the sound of "the local government has a vested interest in church property . . ." Government should keep its distance from the Church and vice-versa. Obviously, the divide can't be complete and the secular courts sometimes have to sort ownership issues out - we're seeing a lot of that these days, sadly. But Virginia is probably not the only state where a lot of these old laws reflect an ox-goring from some remote point in time. The author of the Virginia statute was simultaneously a member of a congregation with in a spat with the national church, a lawyer representing his congregation and other neighboring ones in similar disputes, and a member of the Virginia General Assembly. The Virginia law puts the state too much in the middle of the congregation and encourages rampant politicization of intra-congregational dynamics. If A can swing a majority vote one week, B may try to counter it the next. Yuk.

I don't think any state in the Union would enact such a statute today (including Virginia) and I'm fairly certain any draft bill along the lines of the Virginia Division statute would not survive even cursory constitutional/legal review by legislative counsel.