Yes, Virginia, there was a Standstill Agreement 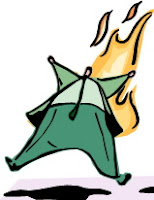 TERMS OF STANDSTILL AGREEMENT
APPROVED BY THE STANDING COMMITTEE AND EXECUTIVE BOARD
OF THE DIOCESE OF VIRGINIA
DECEMBER 18, 2006
1. The Diocese of Virginia ("Diocese") and The Episcopal Church ("TEC"):

3. The Diocese/TEC and each of the congregations:

a. will seek in good faith to negotiate with each other an amicable resolution of their differences concerning the property and clergy status.
b. may terminate the agreement by giving 7 days notice to all other parties, but this shall not affect the agreement between any remaining parties unless they independently invoke their right to terminate. This Agreement shall terminate on January 18, 2007 unless renewed by mutual agreement.

Patrick Getlein, Secretary to the Diocese of Virginia, has written to the Washington Times and asserts that the congregations (who entered into this Standstill Agreement with the Diocese -oops, he doesn't mention the Standstill Agreement at all and for some reason it's still not on the Diocese of Virginia website) have "filed claims in Virginia courts to authorize that unlawful effort" to "take that property with them" by the "congregations that chose to leave The Episcopal Church."

As we see in this Standstill Agreement by Standing Committee and the Executive Board of the Diocese of Virginia, they agreed that the congregations "may report their congregational determinations by filing a petition/report with the relevant VA Circuit Court pursuant to Va. Code 57-9 without violating the agreement." Which of course, is what we did. We thought we were heading to Bishop Lee's Property Committee, as All Saints Dale City had done before us, to negotiate the next steps. The Standstill Agreement plainly acknowledged that filing the petitions/reports by the congregations with the court was not - repeat, was not - the initiation of any civil legal action.

Why would Patrick, on the Diocese of Virginia's stationery, write to the Washington Times asserting that the congregations who voted to depart following the Protocol for Departing Parishes and had negotiated the Standstill Agreement and had elected representatives to Bishop Lee's Property Committee had "filed claims in Virginia courts to authorize" what he calls an "unlawful effort"? He then asserts that the Diocese of Virginia is in court "defending" against their claims.

The fact remains that the Standstill Agreement acknowledged that there had been no civil legal action taken when the congregations filed their petitions/reports with the Virginia Circuit Court. We all thought, until the Diocese of Virginia withdrew from the negotiating table (they left us at the table, remember?) that we were moving forward, in the words of the Standstill Agreement, to "seek in good faith to negotiate with each other an amicable resolution of their differences concerning property and clergy status."

Can it be because the Standing Committee, the Executive Board, the Secretary, and the Bishop of Virginia do not want the members of the diocesan community to know that the Diocesan leadership actually entered into this Standstill Agreement in the first place and, as such, had publicly admitted that the congregations had not, as Patrick Getlien attempts to claim to the Washington Times, that the congregations had "filed claims in Virginia courts to authorize" what he now calls "that unlawful effort"?

The Standing Committee and Executive Board of the Diocese of Virginia cannot state one month that the filing of the reports/petitions were not civil legal action against the Diocese and the next month claim that it was.

It will be very interesting to see whether the Diocese of Virginia will finally admit to entering into the Standstill Agreement and post that legal document on their website.

And just to be clear - the ADV does not take out lines of credit to pay legal expenses. People give out of the kindness of their hearts - it's truly amazing what the people have done and continue to do. If you'd like to contribute to the ADV Legal Defense Fund, click here.

One more thing, the Diocese is attempting to do a "Baghdag Bob" spin on their failure to get Judge Bellows to permit the diocese and The Episcopal Church to go to trial right away over the property, which is what they were in court to do last Friday. Instead, the judge ruled that they would have to wait until at least next fall to even consider the topic - for the subject of what ever trial might take place in October 2008 will actually depend on the judge's ruling on the current case (57-9) now before him. Last Friday the Diocese attempted to force the congregations to spend enormous amounts of money on legal expenses to respond to requests for voluminous discovery on every aspect of the relationship between the congregations and the diocese and that attempt failed. The judge said no.

WED. PM UPDATE: We have learned that Patrick "Baghdad Bob" Getlein's letter to the editor will be published in tomorrow morning's edition of The Washington Times. We expect there may be other interesting things to read tomorrow. And again, if you'd like to give to the Anglican District of Virginia Defense Fund, please click here.
Posted by Unknown at 11:53 AM

I also liked how Mr. Getlein purports to correct an "inaccuracy and misrepresentation" by asserting as uncontroverted truth precisely that which is the disputed point in the lawsuits, viz., that the Episcopal Church is the rightful owner of the properties. Nothing wrong with the court of public opinion...

Isn't it in fact accurate to say that the Diocese is seeking to "win back" the property in terms of who's in possession of it now, as opposed to the question of ownership? That's pretty evidently what Ms. Duin was talking about, and it would've been fair for Mr. Getlein to point out that ownership is disputed. Asserting the Diocese's position is just silly.

Will you write a letter in rebutal?

Where is the love in any of this - perhaps this is why Julian of Norwich appeals to me - all I see in this is money, mowey, money and power,power, power and ,frankly Scarlett, it disgusts me and I don't give a **** ettu

Getlein's letter sounds whiny to me. I think his approach undercuts the Diocese's position. BB's Baghdad Bob analogy is right on.