Washington Post: Property dispute likely to stretch into 2009; second part of case not to be heard until at least the fall 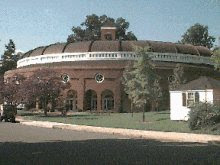 A nasty property dispute between the Virginia Episcopal Diocese and 11 breakaway congregations is likely to stretch into 2009 as a result of a judge's decision, and the two sides say they have spent more than $1 million apiece on legal fees and expect to spend at least that much again before the case ends.

The Virginia dispute is one part of a global Anglican battle over how to interpret Scripture and Jesus's view of homosexuality.

It is being closely watched, because one of the main breakaway organizations-- the Convocation of Anglicans in North America -- is based in Fairfax City, and because it could set a precedent for conservatives across the country who want to leave the Episcopal Church and hold on to church buildings and land.

In the Virginia breakaway churches, majorities voted to quit in 2006 and 2007 and have since refused to vacate church properties worth tens of millions of dollars.

On Friday, Fairfax Circuit Court Judge Randy Bellows told the two sides that the earliest he could hear the second part of the case would be in the fall. A first trial was held in November, but Bellows has not issued a ruling. The two trials are supposed to resolve whether a "division" has occurred in the diocese under Virginia law -- a position the Episcopal Church rejects -- and whether the breakaway groups must vacate.

The Virginia Diocese, the largest in the 2.4 million-member Episcopal Church, announced in the January edition of its monthly newspaper that it had increased a credit line opened last year for the trials from $1 million to $2 million. The diocese expects to pay $80,000 in interest in the coming year, diocesan spokesman Patrick Getlein said yesterday. Money for debt service will come from endowment funds.

Conservative Episcopal blogs have been writing joyfully in recent days about the need for a larger credit line, which was reported Tuesday in the Washington Times.

The diocese's annual budget for 2008 will be about $4.8 million, compared with $4.5 million last year, Getlein said. About $43,000 has been received in unsolicited donations for the court cases.

The Convocation of Anglicans in North America, a growing group of about 60 conservative congregations, spent $1 million in 2007 and expects to spend at least that much in 2008, said Jim Oakes, vice chair of the board of the Anglican District of Virginia, which is made up of the Virginia members of CANA.

CANA has a line of credit to "finance routine cash flow," Oakes said, but legal fees are being paid through fundraising. In the past two years, parishioners have pledged about $3 million; the group has collected the $1 million it has spent.

"Under any scenario, this will drag well into 2009 and beyond," he said.

Conservative Episcopal blogs have been writing joyfully in recent days about the need for a larger credit line, which was reported Tuesday in the Washington Times.

Well, the WaTi did report it -- but the "conservative" blogs, yours included, reported it earlier. I read your report, which, IIRC, was without editorial comment, as well as T19 and SF and I didn't see much joy. I know my comments to Kendall's post would properly be called a lament.

Even though I still think we are going to win (and should win) outright, I would prefer a settlement. Now that we know the whole story, I'm deeply troubled that Bp. Lee gave in to the pressure from KJS and DBB.

That said, the way the reporter phrased the problem: "The Virginia dispute is one part of a global Anglican battle over how to interpret Scripture and Jesus's view of homosexuality." is a lot better than the offhand "it's over homosexuality" that too often appears in the press. Good for Ms Boorstein.

Rod,
It's really not better, IMHO.

It's not about how to interpret scripture but rather the authority of scripture. For example: "No one comes to the Father except through me.." does not leave much room for interpretation. KJS simply denies the statement.

"Jesus' view of homosexuality" can't really be argued as we have no record of any specific pronouncement. He also didn't say anything about incest or bestiality either. He did however say that he had come to fulfill the Law.

It's typical of the poor reporting that has become the norm at the Post.