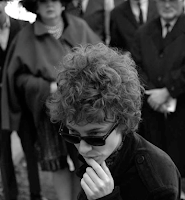 Cate Blanchett's performance as an interpretation of Bob Dylan, circa 1967, in I'm Not There has earned her a Best Supporting Actress nomination for an Oscar. She also received an Oscar nomination for Best Actress for her lead role in Elizabeth: The Golden Age.

Blanchett's performance, frankly, was the best thing about I'm Not There (though I did love David Cross' jewel of a performance as Allen Ginsburg), yet the film is still a fascinating trip through one man's mind - though not necessarily the mind of Bob Dylan.

Last weekend Blanchett won the Golden Globe for her performance as Dylan, one very much inspired by the D.A. Pennebaker film, Don't Look Back as well as scenes from the bootleg documentary, Eat the Document (which we see excerpts of in Martin Scorsese's award-winning film, No Direction Home).

What we still don't know is how the Oscars will be done this year as the Writer's Strike looms on. Stay tuned.
Posted by Unknown at 11:21 AM