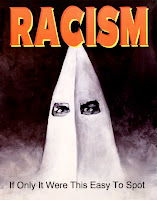 Recently an
Anglican theologian
made public
a confidential letter
from an Anglican primate,
but did not reveal
the name
of the author.

The theologian's post
asserted that the
"meta data" in the letter
revealed the name
of an American bishop,
as well.

Now, for the past two days
British and American "liberals"
have snidely and quite publicly

scoffed and derided
(with ever so much jocularity)
a certain African Anglican
primate, and they did so
without any sense of conscience.

For you see, quite plainly,
They got the wrong man.

Baby Blue -- I don't think this is a racism issue. I think it is a past experience issue.

The reason why folks thought it was Archbishop Akinola was because of the story from last year about Akinola and Minns.

But it so much more fun to play the race card and try to demonize the liberals.

That story was wrong and racially biased. You see, the assumption is that Bishop Minns is "the brains" behind the black man." There, I've said it. If the color was reversed, and Archbishop Akinola was white and Bishop Minns was black, then do you think the Church Times have written that article?

The thought would never have even crossed their minds.

They would have thought that a white Archbishop Akionla had dictated and collaberated the drafts of an important statement/letter as any executive staff would do. He would be in charge - no question about it.

Which of course, he is.

The President of United States does not draft his own letters all by himself and then stick the stamp on them and mail them - especially the most important ones, like say to Putin:

What's up? How 'bout them Redskins? Wanna parlay soon? What do you want for lunch?

Ain't happening. But the meaning behind the Church Times article was that White Bishop Minns is the brains behind the Black Primate of all Nigeria - for God's sake. That's why they were looking at the meta data in the first place! Hello???? They just can't believe that Peter Akinola is capable of being brilliant.

Which of course, he is.

Anyone who knows him, as I do, knows that it is outrageous to think the Bishop Minns tells the Primate what to do.

The Primate is generous and witty and extremely intelligent - and humble. In fact, when I first met him and we shared a hymnal in church I had no idea who he was. He was kind and I liked him immediately. I only learned later who he was.

The Church Times article implies a very different view, as did all these posts by the so-called "progressives" who are not so progressive after all. In fact, they might want to think about selling plastics.

It would be wonderful to see an apology.

Good choice of music here, it fits where I suspect many of us are these days.

Kevin said...
This comment has been removed by the author.
7:25 AM

The Photoshop picture is racism, but don't think you can should watch making such an accusation from the man in Hong Kong: 1) The past experience, 2) It's the same game the liberals play with their accusation of a 'phobia.' An over-use an accusation, especially in haste, will cause the same complete desensitization as with the 'phobia' one, which is pretty much meaningless because of liberal usage (yes, a play on words).

I don't think the man was correct, but this post is more logs onto that fire. It may a better path to follow the example of the man in the photo who is carrying the cross.

I wish you were right, Kevin. I really really do.

In general I disagree with your take. I don't think that the assumption is that Bishop Minns is the "brains" behind Archbishop Akinola.

But the fact is . . . it's about the metadata of the document. And yes, it looks bad, no question, no matter if the latest Primate is white, black or yellow. If you know it was not Archbishop Akinola -- which does not surprise me -- then is the latest Primate white, or black? . . . Because truth is, it doesn't matter which, BabyBlue. Whether he's white or black or polka-dotted, the suspicion is that highly ambitious men over in the states are using Primates to achieve their own ends. That's the bias -- not the racial thing. And it implies a whole lot worse about those men over here in the states, than any of the men back in other countries, whether Venables, or Akinola, or Gomez, or Kolini.

The reason why folks on the other side are looking at the meta data of documents, BB, is the same reason why reasserters look at the email that Kenneth Kearon sent to Louie Crew and would definitely check Kearon's metadata were a Word document to fall into their happy clutches.

I know I would!

Difference is . . . reasserters aren't apparently able or willing yet to strip metadata, as Greg helpfully explained how in a meticulous document -- and revisionists most certainly are.

Why on earth would reasserters like BB need to "demonize" liberals when the actions of liberals on full public display for all the world to see serve quite nicely.

BB doesn't need to take any extra effort to make liberals look bad -- liberals do that for themselves. I'm confident that BB is sincere in her belief that this issue with metadata is about racism -- I just don't agree with her at all.

But there's no need for any of us reasserters to put in any overtime on liberals looking bad, when the media helpfully reports the progressive activist actions for us.

The British colonized Nigeria and many in the UK still think of the Nigerians as inferior and in need of white man's assistance. BB is right to call this attitude "racism".

I edited the original Wikipedia article on Archbishop Akinola. It was written by someone who hates the man. Racism is one form of hatred and distain, but the real target isn't Peter Jasper Akinola, but Jesus Christ himself.

The Church Times maybe racist (they certainly have an elitist tone in many of their articles, so racism could be a part).

I'd urge extreme caution on leveling the charge of Dr. Poon. His motivation was probably shock at the letter and maybe in a odd way attempting to dismiss criticism of the unnamed Primate by the metadata that pointed to another source. Instead of putting the African down, he may have felt the American was overstepping his authority wanting the Primate to stand up for himself. Remember Dr. Poon is not a revisionist, he writes articles for GS website, he just happens to showing more ComCon & disagreeing with the FedCon approach in a very visible manner.

We need to step with caution of accusing revisionist of evil motives, but hopefully we can trust the 'orthodox' to have good motives to poor actions.

The way some ComCons were out in force on this one and pointing to the Church Times article, I wonder if they desire a change over of Primates hoping for less of what Business classes call "informal path of authority." Things are certainly going a more FedCon route at the moment and this may be a reaction to that more than racism or elitism of the West.