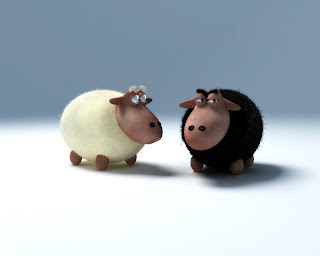 According to Christianity Today in their story online "Episcopal Headquarters Takes Steps to Remove Conservative Bishops," George Conger reports that Bishop Schori sent out Christmas Cards to all the Episcopal bishops that "shows a mother and child surrounded by three wise women."

Of course! The men stayed home and watched sports and it was really the Three Wise Women who showed up. Someone get Rowan on the phone. Apparently there's no mention of Jesus in the card at all. Instead the card focuses on "wise women throughout time and in every culture know themselves to be seekers and seers of the divine."

And that, Charlie Brown, is what Christmas is really all about.
Posted by Unknown at 9:49 AM

I expect they could have found three wise women

Are you trying to tell me that our Bishop can't take pride in the fact that she is a woman and there were a lot of strong, capable women who came before her? Amazing, a WOMAN would be commenting on another WOMAN because she is proud of who she is. Aren't we supposed to be sisters - sharing in our successes and our ventures through this world??

I believe Robin is appealing to "shame" technique to win the day. As in Baby Blue is somehow less of a woman if she disagrees with Robin's bishop because on the gender.

I'm tempted to make some sort of wise crack about 'female "logic"' but I should behave myself ... don't want to raise Baby Blue's ire to prove her womanhood [*wink w/ sly grin*]

I was just being snarky. But really - can't someone say something and not be taken so literally??? Should we throw all of the people who believe God is a woman under the bus???

RE: "Aren't we supposed to be sisters - sharing in our successes and our ventures through this world??"

I support people's ideas, not their female sex. What a terribly prejudiced thing to imply -- that women would support other people just because of their chromosomes.

Not to mention that the PB wasn't commenting about how proud she was of who she is, but rather was simply sending out a Christmas card representative of her gospel -- a gospel with which I suspect that Baby Blue does not agree.

This is a tremendously celebratory card. It apparently accurately portrays the myth of whatever gospel KJS has invented. I suppose in this alternative religion, there was no Joseph, no dream given to Joseph to escape to Egypt, and certainly no possibility of having the three mythical gifts, "presence, love and daily bread" provide the resources for such a trip. These three gifts of "presence, love and daily bread", completely practical and completely without unique meaning, also serve no symbolic function - such as the gold announcing a king, frankincense proclaiming a priest, and myrrh prophesying a death do in that other religion called Christianity.

I guess I'll stop sending pictures out of my family and saying "Peace on Earth". I didn't realize that their was a rule that all Christmas cards needed to include a picture of Jesus.

And as for the "victim card", I guess trying to bring a little lightheartedness to folks that are set on attacking our PB just don't get lightheartedness when it comes to Christianity. I'm not looking for sympathy and playing the victim - clearly you have assigned that label to me and know absolutely nothing about me. I'm noone's victim.

My, my, my, such brouhaha about a Christmas card. Imagine had she not sent one at all! Or what if it had said simply, "Merry Christmas!" Would that have made her theology less suspect? Mary, why draw attention to something so innocuous? Do you really think three, no more no less, wise men, no women no children, came to a Bethlehem stable all at the same time, with the oxen lowing, the flocks sleeping and angels singing French noels-no doubt in heavenly surround sound?

I guess I see your point though, the story makes for some lovely carols, and it just wouldn't do to sing "We three queens of Orient are." People might get the wrong impression.

RE: "I didn't realize that their was a rule that all Christmas cards needed to include a picture of Jesus."

No -- what's necessary for a progressive Episcopalian is that the card nicely demonstrate her gospel. And as Bill above pointed out: "It apparently accurately portrays the myth of whatever gospel KJS has invented."

That's cool by me. I'm glad she sent it out -- I always prize honesty and clarity and that KJS continues to provide in spades. I'm glad that BB pointed it out too.

Just think -- back even 15 years ago, blogs weren't around and the average Episcopalian would not have been made aware with such striking and visual clarity our Dear Leader's gospel. But now . . . it's pretty much every day that we learn more. And every time . . . it's another "drip" of the drip irrigation.

Every day, some new Episcopalian hits "the last straw" that makes him think "goodness, I thought it was all exaggeration, but maybe there's something to what my friends have been telling me -- I'll keep a closer eye on things."

Thank God for blogs and the Internet!

anonymous: "what's necessary for a progressive Episcopalian is that the card nicely demonstrate her gospel."

Says who? She sent a holiday greeting card to her colleagues not a homily.

And as Bill above pointed out: "It apparently accurately portrays the myth of whatever gospel KJS has invented."

It's like...everything has to be taken so literally. Wait a minute - is THAT what you guys are getting at? WOW..that's just over the top. I'm thinking that maybe KJS's card was just the vehicle for the very nice, personalized notes she wrote to her friends and colleagues INSIDE the card. Now THERE's a thought!

Kevin said...
This comment has been removed by the author.
8:36 AM

What is cool about this thread of comments has been that a card that is intended to "make a statement" about the beliefs and worldview of the card-sender and about the Three Wise Women . . . is now being spun as just an "everyday average ordinary little greeting card about which you should see NO real message."

But the revisionists on this thread are outraged that any such message has been received. It's just rich. May I just put it that the card creator would be very depressed if those viewing the card see NO MESSAGE, since that would mean that she failed in her attempt to communicate both visually and with text?

That's what I appreciate about some revisionists. They 1) communicate a clear message then, when they are called on that message attempt to 2) deny that any such message was intended or sent.

Where are all the "prophetic feminists" standing up for what they believe -- for their ideals -- for Womyn???

Okay - so I read the card and you know, it was wonderful! A message of inclusiveness and God's love for everyone. And, amazingly, Jesus was caucasian, and the four women were all of a different race. THAT part wasn't mentioned in the comment thread. I'm sorry - I just don't get how everyone can be so upset about a Christmas card wishing everyone a Merry Christmas and talking about how God is inclusive. My bad.