The Bill of Rights: Protecting Individual Liberty or the Corporate Franchise? 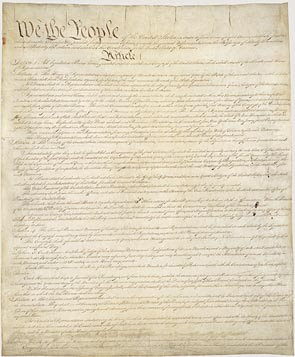 David Trimble has an interesting essay on Bishop Lee's remarks to the Virginia Diocesan Council. At Council the bishop said, "“If the attorney general’s view of the law prevails, it will mean that the Commonwealth of Virginia gives preference to churches with congregational governance, discriminates against churches that are hierarchical or connectional in their governance, and intrudes into the doctrine and discipline of communities of faith.” The bishop asserts that religious liberty, in the context of the Virginia Statute for Religious Freedom and the First Amendment protects hierarchical churches - which is so absurd it shows an incredible lack of understanding about the context of religious freedom in the Commonwealth and in the United States.

As David rightly points out here, those freedoms are individual liberties, not protection for corporate entities that seek to overwhelm and impose a system of beliefs on individuals - especially when they have departed their own historical documents. "Religious liberty in the United States is all about individual liberty - the freedom to not be coerced by designation of a state religion," David writes, "and the freedom to practice the religion of one's choice. Period. Read the First Amendment and that's all you will see. It has absolutely nothing to do with hierarchical vs. congregational governance whatsoever."

It is important that we read these statutes ourselves and not rely on others to tell us what we to think. The same think applies to the scriptures - which is why we are in this mess in the first place. A biblically literate laity is a fearsome thing to clerics, bishops and clergy alike. At the same time, constitutional literate citizens are equally fearsome. The bishop appears to think that Virginians have forgotten about Patrick Henry and George Mason and Thomas Jefferson and do not known their own history in the Commonwealth, nor have they read either the Virginia or the the United States Constitutions lately. Read, mark, learn, and inwardly digest them. We ignore those things at our own peril. But one can be certain the Attorney General of the Commonwealth of Virginia knows knows his history and knows what those historical documents say and mean and it's his job to defend the Constitution and Statutes of the Commonwealth of the Virginia.

What makes American history - and Virginia history - so extraordinary in those founding documents was that our founders recognized (and sometimes after fierce debate) that our rights are secured as individuals, not to the class, the organization, the group or associations we belong to. There are no implied trusts in Virginia. We threw off the chains of slavery and when we found there were still more in chains, those were thrown off as well by force. "It is for freedom Christ came to set us free," and Virginia has learned the hard way that some are not more equal than others. There is no "in club," no "upper class," no hierarchy that can impose its will and take those freedoms away. No, not even the Episcopal Church. It is not the "freedom of the church," Bishop Lee - it's the freedom of individuals to worship freely. He scorns the freedom of individuals when he warns the Diocesan Council that the Attorney General's actions will cause "the Commonwealth of Virginia gives preference to churches with congregational governance." Congregational governance means liberty for the individual. Bishop Lee should be ashamed to publicly twist the meaning of the guarantee of our individual religious liberty to mean a guarantee of state-protection for corporate institutional entities over the constitutional rights of individuals - as if.

We can only imagine what Mr. Jefferson would say about that.

Read David Trimbles' essay here.
Posted by Unknown at 7:58 AM

Bishop Lee and the others of his ilk have enthusiastically blacksmithed the canons of the church to their whim so it is an easy thing to move up to the Constitution as the next impediment to remaking the church in their image.

It is worth noting that efforts to disallow corporate political contributions have been stymied on First Amendment grounds -- money is seen as speech and corporations, in the eyes of the law, are not distinctly different than individuals. So restrictions on corporate contributions are as unconstitutional (so the reasoning goes) as abridgement of the rights of individuals to free speech.

As you are quite well aware, legal reasoning and "common sense" do not always align, but judges rule on the former. I'm not so certain the Diocese of Virginia's argument won't find some traction.

It's not Bishop Lee that flunks con law. You and David Trimble are apparently saying that individuals have rights, but when individuals come together as a group, they don't have rights. That's not just wrong, that's absurd. Ask your lawyers-- there's a reason that argument will never be made in court. It's not just that it ignores free exercise law; it ignores free speech law, freedom of association law, ...

And last I checked, bb, no one was stopping you from worshipping however, whoever, whenever, and wherever you choose. Or are you incapable of worshipping without your building?

Anon, we're talking about Bishop Lee's citation on religious liberty in his speech at Council. The Virginia Statute and the Bill of Rights are aimed at the individual citizen - and as we've seen this weekend, our founders were right to be concerned for individual religious freedom - unheard of in the world to that time, and even in many parts of the globe today.

Let us lift up our glasses in a toast. To Mr. Jefferson, Mr. Mason, and Mr. Madison.

[Sec. 1] Whereas Almighty God hath created the mind free; that all attempts to influence it by temporal punishments or burthens, or by civil incapacitations, tend only to beget habits of hypocrisy and meanness, and are a departure from the plan of the Holy author of our religion, who being Lord both of body and mind, yet chose not to propagate it by coercions on either, as it was in his Almighty power to do; that the impious presumption of legislators and rulers, civil as well as ecclesiastical, who being themselves but fallible and uninspired men, have assumed dominion over the faith of others, setting up their own opinions and modes of thinking as the only true and infallible, and as such endeavouring to impose them on others, hath established and maintained false religions over the greatest part of the world, and through all time; that to compel a man to furnish contributions of money for the propagation of opinions which he disbelieves, is sinful and tyrannical; that even the forcing him to support this or that teacher of his own religious persuasion, is depriving him of the comfortable liberty of giving his contributions to the particular pastor, whose morals he would make his pattern, and whose powers he feels most persuasive to righteousness, and is withdrawing from the ministry those temporary rewards, which proceeding from an approbation of their personal conduct, are an additional incitement to earnest and unremitting labours for the instruction of mankind; that our civil rights have no dependence on our religious opinions, any more than our opinions in physics or geometry; that therefore the proscribing any citizen as unworthy the public confidence by laying upon him an incapacity of being called to offices of trust and emolument, unless he profess or renounce this or that religious opinion, is depriving him injuriously of those privileges and advantages to which in common with his fellow-citizens he has a natural right; that it tends only to corrupt the principles of that religion it is meant to encourage, by bribing with a monopoly of worldly honours and emoluments, those who will externally profess and conform to it; that though indeed these are criminal who do not withstand such temptation, yet neither are those innocent who lay the bait in their way; that to suffer the civil magistrate to intrude his powers into the field of opinion, and to restrain the profession or propagation of principles on supposition of their ill tendency, is a dangerous fallacy, which at once destroys all religious liberty, because he being of course judge of that tendency will make his opinions the rule of judgment, and approve or condemn the sentiments of others only as they shall square with or differ from his own; that it is time enough for the rightful purposes of civil government, for its officers to interfere when principles break out into overt acts against peace and good order; and finally, that truth is great and will prevail if left to herself, that she is the proper and sufficient antagonist to error, and has nothing to fear from the conflict, unless by human interposition disarmed of her natural weapons, free argument and debate, errors ceasing to be dangerous when it is permitted freely to contradict them:

[Sec. 2] Be it enacted by the General Assembly, That no man shall be compelled to frequent or support any religious worship, place, or ministry whatsoever, nor shall be enforced, restrained, molested, or burthened in his body or goods, nor shall otherwise suffer on account of his religious opinions or belief; but that all men shall be free to profess, and by argument to maintain, their opinion in matters of religion, and that the same shall in no wise diminish enlarge, or affect their civil capacities.

[Sec. 3] And though we well know that this assembly elected by the people for the ordinary purposes of legislation only, have no power to restrain the acts of succeeding assemblies, constituted with powers equal to our own, and that therefore to declare this act to be irrevocable would be of no effect in law; yet we are free to declare, and do declare, that the rights hereby asserted are of the natural rights of mankind, and that if any act shall be hereafter passed to repeal the present, or to narrow its operation, such act shall be an infringement of natural right.


Yep, it's aimed at the individual - not the Church, as Bishop Lee attempted to twist it in his speech to Council. It's not religious freedom for The Church - but for the individual. That is the statute.

If he wanted to cite something for The Church he should have picked a different statute. But he didn't - he didn't even quote it. He couldn't. Apparently he thought that just mentioning it would be enough. But Virginians know their history. Don't we?

Certainly, the Attorney General of the Commonwealth does.

Congratulations, you can reprint the text of a statute. Of course, that fails to respond to either point I made in my previous post.

And a church is a group of individuals.

Does this mean no toast to Mr. Jefferson, anon?

+Lee is pulling a stupid political ploy in crying victim about the Commonwealth of Virginia, possibly (no verdict has been announced) ruling against him.

A shameful one since 1 in 10 Christian actually do live in hostile situations and some pay the ultimate price for their faith. +Lee's abuse here is a insult.

This is a nasty divorce of two groups of people who once did get along and now it's the fight over the house and kids. The Attorney General has a right to express a position on any case (as do any interested parties), but it is not persecution that he expressed an opinion different than +Lee's any more than +Lee is persecuting the Commonwealth with a resolution on immigration.

+Lee needs to get real, he needs to repent of 'crying wolf' when real Christians are suffering for their faith in North Korea, Burma, Indonesia at the hands of Columbian rebels (sadly this list goes on).

Wait a minute! TEC is not a hierarchical church. There is no Pope! TEC belongs to a body of churches/provinces in the Worldwide Anglican Communion. They are not hierarchical!