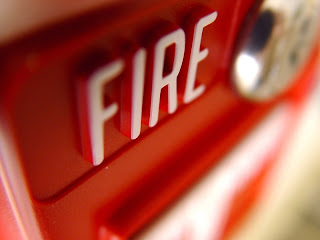 Isn't that often what it's like when the alarm is sounded and we sleep on? Alarms disturb our sleep, our comfort - they are meant to wake us up. When I remarked to my roommate this morning that if there had been a fire I would have been on the list of casualties, my roommate said rather casually, "oh I would have dragged you out." She would have not let me perish but would have saved me. Now that's a great friend, a loyal friend.

Last night as I was falling asleep I was thinking about something I read that one of the delegates on the floor here at the VA Diocesan Council sent me. He said that the bishop spoke a lot about "loyalty" yesterday. I guess there are loyal Episcopalians and disloyal Episcopalians. But what is loyalty? Is it sleeping through the alarms until one becomes a casualty? Or is real loyalty sounding the alarms and even rescuing those who sleep?

We have been rescued by one who was not loyal to "the times" but to His Father. It cost Him everything, but we gained everything. Our loyalty is not to an institution, but to Jesus. When we are loyal to Jesus, then we are truly loyal to His Church, His people, so that when the alarm is sounded, even in the night, we wake up.

On the rock,
the cornerstone,
the foundation
of Himself,
the revelation
and faith
that He is Lord.

BB
Many thanks for this. It is a wonderful reminder to us of why we are in this battle.

I love the alarm story. Oh that those who were awake had thrown us out of bed 30 years ago!