"Yes, Virginia, there is a Division" - Time Magazine calls Episcopal Church split one of the top religious news stories of the year 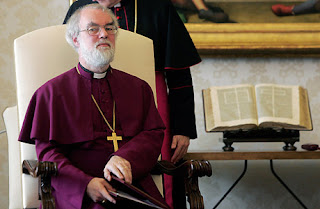 The U.S. Episcopal Church and its parent, the Anglican Communion, continue disintegrating over the issue of gay Christians. Beyond the human cost of this slow-motion implosion — sparked by the Episcopal Church's decision to consecrate an openly gay bishop in 2003 and to accept same-sex unions — the nasty split has already hatched custody battles over church property: Courts are generally being asked to determine whether the conservative parishes seceding from Episcopalianism over the gay issue can take their buildings with them — or whether they belong to the Episcopal diocese. On a global scale, the battle is among the 79 million members of the Communion, who, in a recent count, appear to be almost equally divided over whether to continue to accept U.S. Episcopalians into the international Communion. Equally divided, that is, if you're talking strictly about proportions of the Communion's 38 provinces. By another measure, a majority of believers are on the conservative side, and a majority of the money is on the liberal side. A mess.

Yes-- why in the world don't we get rid of judges and let the media decide these things? It's a mystery...

Why would we want to do that? The media hasn't fallen for it, and presumably judges are even less gullible than the media. Did you perhaps mean the Via Media?