Amazing interview with the Archbishop of Canterbury 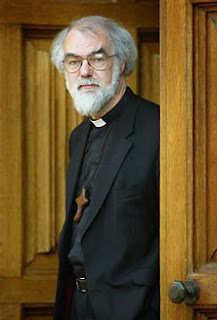 Here is the full interview the Kent (England) teens did with the Archbishop of Canterbury for the British publication, Oi! magazine. What an amazing interview - and the entire article is worth the read. From here.

Tea and Toast with the Archbishop of Canterbury

Oi! comes from Kent and stands for Outspoken Individual. On the hunt for outspoken individuals who are also linked to Kent, we went to meet the Archbishop of Canterbury, one of the world’s great spiritual leaders, to find out if he is as forthright as he is made out to be. Three of us, typical Kent yr 11s and 13s, had all our preconceptions shattered leading, what turned out to be, an overwhelming interview.

He didn’t shatter them immediately of course, but that was partly because we are all different people and all had quite different questions. However, the fact that the Archbishop heard us getting lost outside his palace and stood in the doorframe welcoming us, with not a servant in sight, had an immediate impact.

Cambridge-educated Dr Rowan Williams, 57, married with two teenage children and one time Bishop of Monmouth and Archbishop of Wales led us through the endless corridors of his Canterbury home. We chatted on the way and he told us that he spends weekends and a few weeks a year here. Shortly after we had reached the oldest part, which at nearly 1000 years old was pretty impressive, we were ushered into a huge room. Dr Williams took our coats (still not a servant in sight) and as we didn’t have the courage to sit next to him we perched opposite all in a row, on the end of a green settee.

With previous Archbishops and their wives looking down on us from heavy gold framed portraits and the cathedral in full view, the Archbishop we were meeting just didn’t seem to match up to the Archbishop who, as Head of the Church of England, owned all this, as well as huge swathes of property across the UK.

We comment on this while we settle into our seats. Our host tells us that nothing reminds him more of the weight of the tradition he represents than his morning walk to the cathedral. This is because he is actually taking exactly the same route as Thomas a Beckett did, on the day he was slaughtered on the cathedral steps over 800 years ago. This admission by the current Archbishop, wearing plain black and not a mitre in sight, paints a different picture to the one we were expecting. Suddenly the questions we have prepared seem more relevant, especially the first one.

Yes often. It’s not an easy job. I have everyone judging me and many people thinking that the decisions I make are stupid. My teenage daughter thinks I’m every kind of idiot there is. There are two things that keep me going though and my family are one of them. Having support and love from those closest to me is hugely important. God is my other source of strength. He’s always there for me, even if he thinks I’m an idiot too.

And that is why what the editor of the Daily Mail thinks of me is pretty irrelevant, ultimately I’m answerable to God (and my wife!).

What is the role of women in the Church of England?

By 2025 we expect over 50% of our clergy to be women. The highest ranking among them is the Archdeacon of Canterbury, Sheila Watson.

So theoretically speaking, could I become Archbishop?

Don’t go there! But seriously, women can’t as yet become bishops, so the answer at the moment is no.

I am a Christian, how do I deal with confrontations about my faith?

People need to be reminded that Christians aren’t aliens. We don’t just sit in corners wearing man-made fibres discussing things that don’t matter, we care about real things. This question in some ways is one of peer pressure, which you probably have to deal with constantly. My advice is to have the courage to say and be what you want and who you are. Don’t feel pressured to live up to expectations. Being a Christian can actually help you here, because the only expectations you have to live up to are God’s.

I go to a Baptist Church so prior to my interview I had never really given the Archbishop of Canterbury, or what his job was, much thought. Having met him I found myself in awe of him as a person, quite apart from his position. I was expecting just words, what he gave me was meaning, an understanding of who I was and where I was at, cloaked in kindness.-

I am currently 12 weeks pregnant and have had some tough decisions to make to do with schooling, staying with the father, telling my parents and even whether I should actually keep it. Is there anything you could have said to make these decisions easier?

These decisions are your decisions. I think that you just need people around you who you are able to trust – friends and family for example. As a Christian I could never advise anyone to have a termination. Personally I believe a child is a gift from God and you wouldn’t give a gift back – would you?

I believe abortions are allowed too late as they are still allowed to be performed at 24 weeks of pregnancy. What are your views on the debate on gestation period?

Not everyone in the country is a Christian, so the law has to compromise to reflect different aspects of the discussion, for example if a rape was involved. However, I do think the time limit for abortions is too high, especially as medical science is allowing us to keep foetuses alive that are under even 23 weeks old. This is something that needs to be discussed further.

East Kent has a huge number of immigrants. This fact has got me thinking about how having so many people of different faiths and nationalities might have affected my community. What are your views on the effect immigration has on Britain as a whole?

Well I think we can probably cope with it. When I hear people from the far right or the National Front party causing trouble I just think it shows lack of confidence in us as a nation to be able to deal with new challenges. So I think, “what’s your problem?”, rather than blaming immigrants. We can’t escape this challenge and so need to make the best and the most of it. One thing I would say though, is that when I see things like I did in Norwich recently, of three families sharing a three-bedroomed house, it makes me think that provisions, especially in rural areas, are not sufficient. Gang masters are also a huge issue, especially in terms of Eastern European migrants.

Do you believe other faiths are valid?

Everyone has a right to their own faith. For example, I have met many Muslims and have learned a lot from them. However, I want people of other faiths to respect my conviction as I respect theirs.

Just as I was leaving Dr Williams touched my arm and told me to take care of ‘you both’ – referring to me and my baby. This was completely unexpected but very much appreciated. It made me realise how down to earth and genuine he really was. His comment will stay with me.

I have a sixteen year old friend who has openly admitted he is gay. He was faced with bullying when he told people at the age of 15. He is in a relationship with a 22 year old now and happy, they are even talking about adopting what are your views on this?

This is a big one. I have questions as to whether same sex couples can provide the same stability as ‘normal parents’. I have no answers really, just questions. Many would argue that we need a balance of men and women to bring a child up. However, I have seen one fantastic example of same sex parenting first hand and I suppose stability is another key consideration.

Is this why you support the ordination of gay clergy/bishops?

I have no problem with gay clergy who aren’t in relationships, although there are savage arguments about the issue you might have heard about. Our jobs mean we have to adhere to the Bible – gay clergy who don’t act upon their sexual preferences do, clergy in practicing homosexual relationships don’t. This major question doesn’t have a quick-fix solution and I imagine will be debated for many years to come.

Are you married? (I asked that after he told me he had children. He laughs.)

Well generally, as I have children and as Head of the Church of England that’s the way round it goes.

How much do you get paid? (He laughs again.)

Less than a headteacher, about £60,000 a year – but obviously I have very few living expenses. I do enjoy my job though, at least the non-political side of things. I love meeting people, for example I visited two comprehensive schools, opened a new building – which was built on environmentally friendly principles (I’m passionate about the environment). I also visited the new head of St Thomas’ Hospital in London.

What do you do in your spare time? ( He collapses back on the sofa …)

Relax! I enjoy watching movies and the theatre, we go there as a family. I also like reading and even write poetry. I do try to finish my work by 6pm, firstly because I want to have dinner with my family, but secondly I love The Simpsons and need to be finished to watch them. I usually have an evening appointment afterwards, though.

I saw a different person to whom I had expected and felt privileged that he allowed me to see the person behind his position. He understood the problems us teenagers face in our every day lives and spoke to me as an individual, rather than ‘just’ a teen. That, more than anything, has made me believe that he wants to make a real difference to all of us.

We spent some time afterwards in his kitchen, and he really did make us a cup of tea. Stories about how he found a dead person in his drive, how he made the Church build him a family kitchen for every day use, and even the fact that his kids hate him coming to watch them at any event makes him ever more human.

When we left we were silent, I don’t think any of us were able to digest what had just happened quickly. And in a world that Dr Williams sees as being full of ‘quick fix’ solutions, our considered response to our afternoon with him would have pleased him most of all …