For the Record: The Standstill Agreement 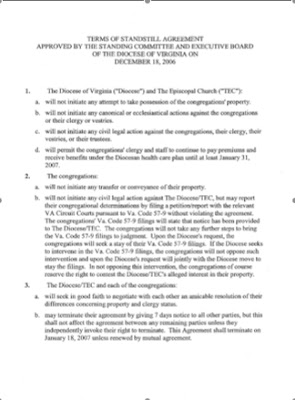 Last weekend I had dinner at an old friend's home and we got into quite a discussion about the current "troubles." It occurred to me that my friend had not heard of or seen something called the Standstill Agreement. It's no where to be found on the Diocese of Virginia's website nor is there any mention of it there.

It's as if it never existed.

Following the votes of the congregations to depart the Episcopal Church and following the Diocese of Virginia's Protocol (which included recognizing the legal statutes of the Commonwealth of Virginia which called for congregational votes), Bishop Lee established a Property Committee to begin to negotiate a settlement that would be a witness to the larger Christian community as well as to provide a way for us all to remain in as closest communion as possible. He also requested a Standstill Agreement which assured all the parties that no adversarial litigation would be filed. That standstill agreement recognized that the filing of reports by voting congregations in accordance with the Virginia Division Statute did not constitute adverse litigation otherwise prohibited by the standstill agreement.

No where on the diocesan website is there a record of this Standstill Agreement. It was to be renewed as the negotiations continued and would provide a safe space for those conversations (following the model established by the departure of All Saints, Dale City).

However, following a meeting of the Presiding Bishop's chancellor, the Standstill Agreement was ended by the diocese. The diocese then filed lawsuits against all the churches, their rectors, their trustees, and their volunteer lay leadership. This was followed by The Episcopal Church doing the exact same thing as well. Even to this day, it was a tremendous shock.

Here is the Standstill Agreement (click on the graphic or here and you will either be able to read the original document as or download it to your desktop). Please read it very carefully. One hopes that the Diocese of Virginia will see fit to add it to their website and clarify the order of events.
Posted by Unknown at 12:13 PM

I had forgotten all about the standstill agreement as well. I was a defender of Bishop Lee until the last minute in my congregation. I even stood up for +Schori on more than one occasion. I really had hoped this could all be worked out amicably. It seems so long ago when it happened it's just amazing. Thanks BB for keeping me up to date. I enjoy the relative quiet of your site to the din of others. God Bless, RWK

I don't know the details but, on the other hand, I am not being sued so I can hopefully be a bit objective. Was this not a voluntary agreement? If so can't either side withdraw from it. If there was no agreement to keep it on the website then what is all the uproar about? Methinks she doth prtest too much.

Thanks for your efforts in presenting actual documents instead of the "spin". I also enjoy the relative calm of your site.
I hope that the full transcript of PB Schori video deposition that is listed in the Day 3 transcript (page 733 Exhibit 288) will be made available.

BB, the apparent crux of your post -- the continued attempt to define the congregations' petitions as something other than litigation -- fails according to the words of the agreement and your own post:

This was an agreement that it wasn't contrary to the standstill, not that it wasn't litigation. Parties to a contract can agree that the sky is red, if they want. That doesn't change the actual color.

Last time I checked the sky wasn't red - and the Standstill Agreement was negotiated to take us through by renewal Bishop Lee's Property Committee plan, following the Virginia Protocol. That was the plan - Bishop Lee's plan, by the way, until the happy little visit from the PB's chancellor. And this is not what is available on the Diocese of Virginia website. It's as if the Standstill Agreement never existed - I am assumed they had put it there since it's one of the most important documents in this entire event. It wasn't until dinner last week and hearing what i heard that I went back to the Diocese of Virginia website and realized that the Standstill Agreement is missing from their website. It would be interesting to see if they correct that or if they continue to leave the laity and clergy of the Diocese in the dark.

I trusted Bishop Lee when this Standstill Agreement was put in place. I thought it was a sign of his good faith through a very difficult and challenging time. His prayer had been that we would find as close a communion as possible - he recognized then that the church was not the building but the people. But somehow, after that meeting with Mr. Beers, something drastically changed.

The fact that Standstill Agreement is not to be found anywhere on the Diocese of Virginia website is bewildering.

I'm sorry BB, I'm not buying it any longer.

The Washington Times reported the "Prosecution" rested (error for the 'plaintiff' in civil trials) after CANA made their case and DioVA made their opening arguments. Filing with the court did start a legal process (reading 2 a & b). 1 d seems to have been in breach, but then honored at that last moment.

This is just an agreement to take no action (including CANA not doing anything with property). I do not know the order of filings, if this was signed later than some filings were already in process thus no breach of section 2.

However, filing and a contesting did put CANA as plaintiffs in the last round and defendants (who go second) would be DioVA. I'm guessing if this goes to a third phase of civil then DioVA will make their case and CANA will open second.

I think there a lot of 'spinnning' going on in this arrangement. Both sides entered into an agreement, then Beers, Esq. meets with DioVA and the other path was taken, if it expired and other CANA parishes filed under 57-9 then I don't see how this adds much to any moral high ground.