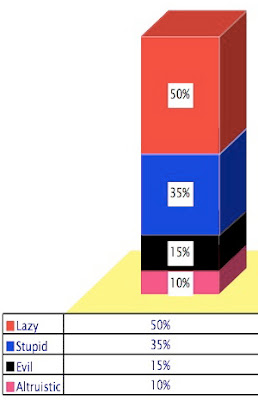 Perhaps it is time to revisit The Hammersten Hierarchy of Human Behavior (or the "HHHB"). Created by a brilliant scientist in his spare time, it focuses on four reasons or tiers for why we do the things we do. And it works every time.

We do the things we do because we are:

But of course #1 reason we usually assume people do the things they are do (especially if we are upset about it) is because we think they are evil.

And the #1 reason we think we do the things we do is because we are altruistic.

We associate malevolent intentions by those we oppose and benevolent intentions by ourselves. Ah, but according to The HHHB, the #1 reason we do the things we do - we and our opponents - is because we are lazy. We didn't read the report. We missed the meeting. We watched football. We went to the Mall. We overslept. We weren't paying attention. We forgot to return the call. We didn't feel like it.

The #2 reason why people do the things they did is because they are stupid.

Yes, stupidity reigns. Surprised? Of course, we don't want to be the ones to say we are stupid - just them. But as Christians who are fallen it's apparent there is enough stupidity to go around. "I don't know," is a good example. Of course, it's hard to admit that, "I don't know," which makes us even stupider.

We can be foolish and we can be ignorant. In a global world where cultural blunders are simple to accomplish since we consistently wear cultural blinders, it's amazing we are not constantly at war because of our stupidity. Thank God for grace.

The third reason, according to The Hammersten Hierarchy of Human Behavior is because of malevolence - evil. It's often the first reason we jump to - especially in politics and religion. Those blasted Death Eaters. Evil does exist and how much of a percentage we want to attach to this third tier may either come from our experience or our mood - but often quite frankly, it's the #1 place we go to when our opponents are actually either lazy or stupid - how disappointing. Remember, Jesus understood this quite well, even as he was hanging on the cross, a moment of excruciating evil. But he looked upon those who had nailed him to the cross (and that would include us, for our sin put him there, didn't it?) and he said, "Father, forgive them, they don't know what they are doing." The phrase they don't know what they are doing is a very kind way of saying we're stupid. That has got to infuriate the devil - to see an outpouring of mercy from the One whom he's worked hard to see hatred burst out. Oh it burst out, all right, right out of the tomb. Oops.

On the other hand, according to the HHHB - evil does really exist. It's not cartoon "evil" - it's the real deal, the full enchilada, and it makes it into the hierarchy. Closing our eyes and wishing it away is not going to do it. How much of a percentage we assign it's place in the hierarchy may have to do with our theology - or our mood - but it's #3.

So before we jump to #3 or think about pretending #3 doesn't exist, shall we give each other the benefit of the doubt and realize that whom ever may have wronged us are probably lazy or stupid. Not exactly a joyful thought, but one that's probably closer to the truth.

Of course, there is #4 - altruism. It's a place we all want to live, but very few actually do. It's the Land of Oz before the Wicked Witch of the West shows up. It's the place we all want to go to when we want to publicly shame others, we feign #4 for ourselves - don't we? But isn't #4 decided by others, and not ourselves? It's like humility - if we think we are humble, we are definitely not.

You can read more on the "HHHB" here.

In the meantime, here's a little entertainment while we consider the news of the world:

Love the video! David Booth Beers looks so much better in his full-length black suit and helmet!

Hello, I do not agree with the previous commentator - not so simple