First Thoughts on the Advent Letter: An International Game of Kick the Can 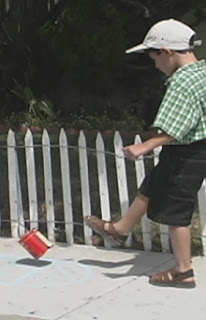 Of cans and ships.

I am sure that I would love to have Rowan for a professor - but this is Neville Chamberlain in a mitre. He seems to have been sucked into the American Vortex (he sure can point fingers at Pennsylvania Avenue, but not Second Avenue). His answer to our problems is - yet another personally appointed committee, another process, and a system of committee and processes that is totally dominated by the Episcopal Church. Hello? We invented the system, for God's sake (or not)! They had mobs in England - we have committees! We strangle people as they sit around board rooms until they give up. Then we march into the streets and declare victory.

The Episcopal Church is run by progressive street fighters and intellectual snobs with wads and wads of cash in their pockets from dead Episcopalians.

The question is, will TEC manage to dutifully line up and salute the fact that Gene Robinson has been barred from attending Lambeth as a bishop? Is that why there was that little meeting in Chicago - to get people ready for the fact that Bishop Robinson, a sitting Episcopal diocesan bishop (duly elected, duly consecrated) will not be welcome at Lambeth? If progressives in the Episcopal Church go for the Neville Chamberlainesque plan from Canterbury, it's because the whole thing is a sham. Pass the donut.

TEC is designing the agenda for Lambeth. Ian Douglass made quite a presentation (with powerpoint and the whole deal) on the Episcopal Church's preparation for Lambeth and it was trotted out before the gathered press during one of their brief moments inside the meeting of the House of Bishops in New Orleans.

Rowan Williams is proposing an insider's kitchen cabinet that he wants to appoint who will tell him - what? "I also intend to convene a small group of primates and others, whose task will be, in close collaboration with the primates, the Joint Standing Committee, the Covenant Design Group and the Lambeth Conference Design Group, to work on the unanswered questions arising from the inconclusive evaluation of the primates to New Orleans and to take certain issues forward to Lambeth." To do what? Isn't this what he's all ready done over and over and over again, starting with Windsor and ending up with Dar es Salaam? The problem is, he's Neville Chamberlain when it comes to politics. He's an excellent teacher and mentor and I would want him for a professor and priest in a minute. But it's clear from this letter that when it comes to leadership, he's dissolves to an international game of kick the can. I wonder how much longer he'll last in the job before he goes back to the academic world so we can all take his classes. He can then put the can back on the shelf.

A few years ago my Brother the Methodist shook his head as I was telling him the latest in the Anglican saga. "They have no Navy," he said simply, sitting in the livingroom in his naval uniform, as though that just about summed it all up.

"They have no Navy," he repeated. In other words, a Navy can blockade. When a nation has the ability to blockade, they win.

So, who has the Navy? Rowan Williams? No. Katharine Jefferts Schori? She thinks she does and acts accordingly - but does she really? The Global South? Hmmm.... Who has the Navy? Anyone?

The Ming Dynasty of China had the largest navy that hte world had seen up until that time. The Confucian scholars, worried that a navy would only go forth into the world and bring back ideas from barbarians, actually talked the Emporer into dismantling it and passing an edict that Chinese boats could be no larger than a fishing dingy.

So when, a hundred years later, the Brits came with their Navy, the Chinese had nothing to fight with except fishing dingies.

We all know what happened with THAT.

I think that Rowan has the navy. He has the power to invite to or disinvite from Lambeth. That's the only 'blockade' that the AC has. But Rowan is refusing to use his Navy. He's dismantled it in favor of fishing dingies.

We all know how THAT scenario ends.

I don't think this will actually be another "kick the can" exercise. Note that the famous JSC report was a two-edged sword: if TEC had smiled and gone along with the report, TEC would have been obliged to live up to the report's (optimistic) interpretation.

There is no doubt in the letter as to who and what is responsible for the strains in the Communion; +++Rowan mentions the boundary crossings only as causing more headaches in arriving at a solution.

Moreover, while what few hints we've had hitherto implied that he might just disinvite the dozen or so most obnoxious apostate TEC bishops and let it go at that, he is now writing in terms of deciding on discipline for TEC as a Province -- at least in outline -- prior to Lambeth.

We also have the hint -- "... expressed dissatisfaction with our present channels of discussion and communication..." -- that he's aware of the Primates' disgust at ACO's attempted manipulation of Communion processes. Another good sign.

The Global South has the navy. I still don't know why people don't read the Road To Lambeth report.

It's really very very clear: If anyone from ECUSA turns up, then the entire Global South won't go to Lambeth. Nothing Rowan can do or say will change that: he can decide to invite ECUSA or not. He has decided to invite ECUSA, the GS will not attend, end of communion, end of story.

The Global South have the Navy.

So pleased that you noticed.