Press Coverage of Advent Letter: Archbishop of Canterbury will not reverse decision to exclude Robinson from Lambeth 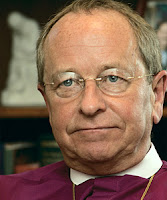 BB NOTE: This may tell us why the "Chicago Consultation" was held last week. It seems likely that the Episcopal Church leadership had been warned what would be in Rowan Williams letter (can anyone say Canon Rosenthal?) and knew that it would - if left to their own devices - a firestorm from the Episcopal progressives who make up the balk of TEC's leadership. The Chicago meeting and the document dump that followed seems to have been aimed at keeping progressives in line so they won't revolt. But the media gets it - the story from the Episcopal Church's point of view is that this has always been about "full inclusion" and it appears there will be no "full inclusion" if you are public about your lifestyle, as Gene Robinson most certainly is. But if the progressives remain complacent, that will be the real story for it will show us that, in fact, it's all a ruse.

From the AP:
Archbishop: No Change Over Gay Bishop
By ROBERT BARR
LONDON (AP) — The archbishop of Canterbury said Friday he will not reverse his decision to exclude a gay U.S. bishop from joining other bishops at a global Anglican gathering next year.
Archbishop Rowan Williams' office said he had also not changed his mind about refusing an invitation to Martyn Minns, a traditionalist U.S. priest who was consecrated as a bishop in the Church of Nigeria.
Williams said he has also recruited professional help in trying to reach greater understanding between the U.S. Episcopal Church and its critics both at home and abroad. Williams' office was unable to say immediately whether any invitations had been extended or accepted.

In his Advent message to leaders of Anglican national churches, Williams said Episcopal Church pledges of a moratorium on confirming any more gay bishops or on approving blessings of homosexual unions have not been accepted by all parts of the communion.

"Given the differences in response to the Episcopal Church revealed in the responses of the primates, we simply cannot pretend that there is now a ready-made consensus on the future of relationships between (the Episcopal Church) and other provinces," Williams said. "Much work remains to be done."
Statements by individual U.S. bishops that seemed to deviate from the declarations the bishops agreed to in New Orleans in September have complicated the situation, the archbishop said.
Williams also had stern words for Anglican leaders who have threatened not to attend the Lambeth Conference, held every 10 years and scheduled to start in July in Canterbury.
The head of the Church of Nigeria, Archbishop Peter Akinola, has threatened to boycott the session because Williams also refused an invitation to Minns.
"I have said that the refusal to meet can be a refusal of the cross — and so of the Resurrection," Williams said.
"We are being asked to see our handling of conflict and potential division as part of our maturing both as pastors and as disciples. I do not think this is either an incidental matter or an evasion of more basic questions."
Williams called for professionally facilitated conversations between the leadership of the Episcopal Church "and those with whom they are most in dispute, internally and externally, to see if we can generate any better level of mutual understanding."
"Such meetings will not seek any predetermined outcome but will attempt to ease tensions and clarify options," he said.
Posted by Unknown at 1:36 PM

As a member of my staff said, "Isn't it too bad he can't be as clear with the rest of us as he was with those teens."

Oh for heaven's sake, Baby, the Chicago Consultation has been in the works for six months! Even WE -- the architects of the great juggernaut of the gay agenda -- don't get that kind of inside information that far out from Canterbury!

Ah, we here at the "Other" cafe do not underestimate your organizing abilities, Susan. ;-) I do have to say though that the silence from the progressives is mighty puzzling. It makes no sense not to have the people at the table who are actually in conflict - though I am not sure Lambeth is quite the place to do it.

Frankly, I wonder if Rowan shouldn't just call up all the bloggers, lock us in a room for a week and then see how we'd solve the crisis. We could even film it as a reality show and raise money for the MDG goals.

Thanks for posting - I may disagree with some of your views, Susan, but I can admire your tenacity and commitment.

I know where you stand. Gotta respect that.

My ecclesiastical teeth were put on edge by the change in Anglican ecclesiology implied from the initial greeting. See my reflection at http://www.liturgy.co.nz/worship/matters_files/archbishopcanterburyadventletter.html

Hi liturgy- thanks for posting to BabyBlueOnline.org - I read your piece and while we probably disagree on substantial issues, I found myself in personally in theological agreement with this, though I recognize that in some provinces in the Anglican Communion they do see the Primate in very different ways. In fact, in the U.S. we don't really have a Primate (no matter that she's written that on her letters, she's not a primate, she's a Presiding Bishop). But I do find myself in surprising agreement with you on this point:

Primates – these are “your bishops”

I found my ecclesiological teeth on edge when the Archbishop of Canterbury addresses the primates and sees bishops in the province to which the particular primate belongs as "your bishops." This kind of pyramidal presupposition is the lens through which the situation is viewed. It is the approach of the draft Covenant which has the primates as the magisterium, the final arbiters.

In that strongly pyramidal denomination, Roman Catholicism, I do not believe that the pope would so easily refer to the bishops of that church as “my bishops” (even remembering that in that denomination the pope appoints all the bishops).

I do agree with this out of my low-church theology. What I have found extraordinary in being an Anglican, though, is that we could have Anglo Catholics and low church evangelicals together in one communion. This hasn't been easy and in the United States we've had to some brutal fist-fights over it, one leading to the separation of the Baptists, the next leading the separation of the Methodists, and the next leading to the separation of the Reformed Episcopalians. So it hasn't been easy - and it hasn't always been successful. What could hold us together was the presumption that we were based on a common faith, an Anglican Christianity expressed in our Prayer Book. But as Bob Dylan said in his Oscar-winning song, things have changed.

The American Church has not had the ability to discipline its bishops in theology, one way or the other. As long as the local parishes kept the money flowing to the dioceses, the bishops were content to leave everyone alone. This encouraged the charismatic renewal, but it also encouraged a now nearly pagan-universalism which has flowed deeply into the leadership of the national structures. The local parishes revolted and cut off the money supply. The bishops suddenly came to life, after decades and decades of shrugged shoulders. Once the money was cut off, it became a struggle for power. And that is where we find ourselves today. The Episcopal Church for all intensive purposes is in schism.

That being said, in the United States there does seem to be a re-evaluation of the Apostolic Succession among evangelicals, but not in the Roman Catholic tradition. The bishops may be strengthened in their relationships to other bishops, clergy and the laity - but the authority isn't derived from the traditional view of authority through the Catholic Apostolic Succession but by faithfulness in defending the faith and teaching the scriptures. To those bishops who are faithful in the teaching, there is authority. But when they cease to be faithful to the biblical foundations of the faith, they lose authority.

This is a different view then the one we would traditionally see with Roman Catholic hierarchies. It is not a hierarchy at all, expect perhaps from the bottom down. Now the laity are in fact holding the bishops accountable and if they stray from the faith, they are turned out.

The primates who have held to the faith can expect support from orthodox laity and clergy all over the world. Even Rowan Williams could expect that kind of support as long as he stays to teaching the foundations of the faith based on scripture and not on personal revelation that is contrary to the teachings of scripture. His authority will be recognized.

What happens in this is that other denominations can find ways of rebuilding relationships with one another because what unites us is the historical Christian faith centered on the person of Jesus Christ and His work on the cross and the empty tomb. Now Methodists, Presbyterians, Congregationalists, Baptists, and the non-denominational churches are finding fellowship with one another in unprecedented ways. They too recognize the authority of bishops who are unafraid to preach the Good News of Jesus Christ, in season and out of season.

I appreciate so much your posting - it was great to read what you wrote as well. Thank you.