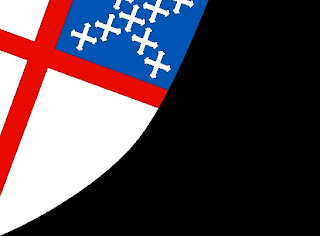 Tip of the TinFoil to TitusOneNine. An amazing letter from Jon David Schofield in response to Katharine Jefferts Schori's letter following the decisions of the Diocese of San Joaquin Convention to provide alternative episcopal oversight from the Anglican Archbishop of the Southern Cone. Here are excerpts:

This year the delegates to the Annual Convention came fully cognizant of what has taken place in Virginia and Southern California where litigation has been pursued vigorously against those who oppose the innovations of The Episcopal Church and who, consequently, have stood up for their faith and remain protective of the property they have built, purchased and maintained with no help either from The Episcopal Church on a national level nor –in most instances– from the local diocese either.

The people of The Diocese of San Joaquin came to the Convention fully aware that years of meetings with the leaders of The Episcopal Church have accomplished little or nothing.

They came fully aware, too, that at the meeting of the House of Bishops in New Orleans this past September a last minute attempt to provide some semblance of oversight was proposed. The sad thing was that those most affected by the innovations of The Episcopal Church had no part in this proposal and to this very day have never seen what such a plan involves. It is true that the vote on Saturday December 8 protest, but it was much more than this. To understand December 8th's vote as a protest only would be to misunderstand the courage of the people within the Diocese of San Joaquin.

They were saying that no matter what the consequences, they take a stand for a clear reading of Scripture, the faith that The Episcopal Church first received - but from which it has departed - and for Catholic Order within the Anglican Communion. Truly, the vote was for their bishop and diocese to remain in the Anglican Communion with the fullness of the heritage we have received as a part of that worldwide body. Once again, it was much more than this.

It was an expression of profound gratitude to the Global South who have expressed support in many ways and more specifically to the Primate of the Southern Cone, his House of Bishops and their Provincial Synod for their understanding of our plight - along with that of many others within The Episcopal Church - and their willingness to offer a place of refuge.

Their offer, as you know, was conditional until such time as The Episcopal Church repents of those decisions and actions that have caused a rift in the wider Anglican Communion.

On the very day your letter arrived asking for clarification, the Advent Letter of the Archbishop of Canterbury was received. In it he pointed out clearly the distress in many parts of the Anglican Communion caused by the unilateral actions of The Episcopal Church.

In his own words he fully understands that "A scheme has been outlined for the pastoral care of those who do not accept the majority view in TEC, but the detail of any consultation or involvement with other provinces as to how this might best work remains to be filled out and what has been proposed does not so far seem to have commanded the full confidence of those most affected." He continues: "Furthermore, serious concerns remain about the risks of spiralling disputes before the secular courts, although the Dar- es-Salaam communique expressed profound disquietude on this matter, addressed to all parties."

Giving thought to the future, the Archbishop makes reference to the upcoming Lambeth Conference during which he trusts: "Whatever happens, we are bound to seek the fruitful ways of carrying forward liaison with provinces whose policies cause scandal or difficulty to others."

Ultimately, then, it is the Archbishop's proposal for a course of action in the months ahead that may affect my status. Since everything that the Diocese of San Joaquin has done, it has done with an eye toward remaining Anglican and in communion with the Archbishop of Canterbury, his proposal should naturally take precedence.

Read the whole thing here.
Posted by Unknown at 12:18 PM