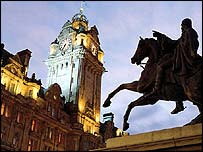 Potter author signs off in style

Author JK Rowling scribbled a note to fans on a marble bust in the Edinburgh hotel room where she finished her final Harry Potter novel.

The millionaire left the message after completing the book at the city's five-star Balmoral Hotel.

In black marker on an antique-style statue, she wrote: "JK Rowling finished writing Harry Potter And The Deathly Hallows in this room on 11 Jan 2007."

The hotel confirmed the Edinburgh-based author signed a bust in the hotel.

However the spokeswoman for the 188-room city centre Balmoral, where rates range from £290 to £1,575 a night, refused to say which room the author had stayed in.

A spokeswoman for the author said: "We can confirm JK Rowling did write some of the book at the Balmoral last month and did complete the book at that hotel."

The writer announced on Thursday that the seventh and final instalment in the series, which will follow Harry during his final year at Hogwarts, would be published on 21 July.

As a single mother on benefits more than a decade ago, Rowling used to visit cafes not too far from the Balmoral while penning the first book, Harry Potter And The Philosopher's Stone.

Since then, the author, who lives in Edinburgh with her husband, Dr Neil Murray, and their three children, has sold 325 million books and earned an estimated £520m.

Story from BBC NEWS:
Posted by Unknown at 12:35 PM

Well, BB, that's kind of better-sweet for you. Hey, when you read the last chapter you can always go back and read them from the beginning.

And that may be exactly how it ends.

As a mom of four, I think I was a great idea to get away (but not too far) so she could concentrate for long periods of time knowing that she was NOT going to be distrurbed. It is also a personal celebration. Very smart idea.

Posh! More eyes would have the chance to see her penmanship if she had scribbled on Radcliffe's bum.

Mark Hamil, is that you again?