The Guardian: Canterbury gets tough on liberals to save the church 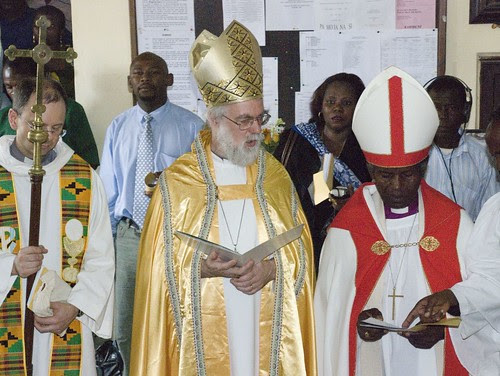 No Schism for Now: Williams gets tough on liberals to save the church

The archbishop of Canterbury, Rowan Williams, kept the worldwide Anglican communion together, at least in the short term, but at the cost of imposing unprecedented sanctions on the US Episcopal church to force it to abandon its liberal policies towards gay people.
A communique issued late last night after a fraught five-day meeting in Tanzania of the primates - archbishops and presiding bishops of Anglicanism's 38 provinces - laid new ground rules for the US church and gave it until September 30 to comply. The plan allows, effectively, for the setting up of a church within a church in the US with the appointment of a senior cleric to oversee dioceses which feel unable to accept the Episcopal church's liberal leadership.

The church's bishops will also have to give an unequivocal undertaking not to authorise any rites of blessing for same-sex couples and to confirm that no more gay bishops, living in same-sex relationships, would be confirmed in office. The crisis in the Anglican communion was sparked by the Episcopal church's election, in 2003, of Gene Robinson, a gay bishop.
The communique said: "If the reassurances requested of the House of Bishops cannot in good conscience be given, the relationship between the Episcopal church and the Anglican communion as a whole remains damaged at best and this has consequences for the full participation of the church in the life of the communion." The primates have accepted the right of the leaders of other provinces to trespass on the US to minister to conservative parishes. This has particularly applied to Archbishop Peter Akinola, the primate of Nigeria, who consecrated Martyn Minns, a conservative evangelical vicar in Virginia, as a Nigerian bishop to oversee parishes that wish to opt out of the Episcopal church.

Archbishop Williams, looking discomfited, admitted that the cost of getting Archbishop Akinola to join the other primates in signing the unanimous communique was allowing him to continue to trespass on Episcopal church territory, at least for the present.

Dr Williams, who nominally heads the 78-million strong Anglican communion, also admitted that he did not know what would happen if the US bishops only voted narrowly in favour of the demands, or how the idea of a primatial vicar overseeing US dioceses would work. "It's an experiment," he said. "Pray for it."

Bishop Minns, who has lobbied the primates' meeting and advised Archbishop Akinola on tactics, said: "I think this statement is a real recognition of the serious divisions in the church. This is unprecedented. It is not business as usual."

More here. Please note that Stephen Bates is on the liberal end and he's not spinning.
Posted by Unknown at 8:26 PM