Saturday Night at the Cafe: It's All Over Now, Baby Blue 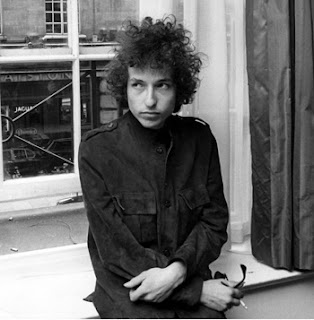 Here's a bootlegged version of the classic song (and inspiration for this blog) by Bob Dylan from the Manchester, England concert at the Free Trade Hall in 1965. A year later, Dylan would return to the Free Trade Hall with his band for possibly one of the greatest rock concerts of all time (erroneously called the Concert at Prince Albert Hall for decades - even the official release of the long-coveted bootlegged concert called it under that name as well, though identified the concert as actually having taken place in Manchester rather than London). At that Free Trade Hall concert in 1966 Dylan hears a disgruntled member of the folk-inspired and disappointed audience shout out at him "Judas!"

Dylan heard the epithet and sarcastically hurled back from the stage, saying into the mic "I don't believe you," in his hipster drawl of the time, strumming his electric guitar several times and then adding, "You're a liar." Then he colorfully directed his band to go into a most amazing performance of Like a Rolling Stone (another extraordinary full performance of the song from that period is here).

It's hard not to recall in his response of "I don't believe you," of another song he wrote two years earlier with that title, I Don't Believe You. The closing stanza of that song reads:

I'm leavin' today,
I'll be on my way
Of this I can't say very much.
But if you want me to,
I can be just like you
An' pretend that we never have touched.
An' if anybody asks me, "Is it easy to forget?"
I'll say, "It's easily done,
You just pick anyone,
An' pretend that you never have met."
B. Dylan 1964 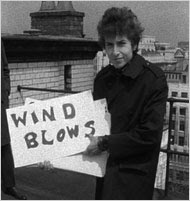 Even here in tonight's featured recording made a year earlier in 1965 at the Free Trade Hall, Dylan knew that it was all about to change for him - he'd all ready recorded Like a Rolling Stone and about two months after this concert, Dylan would plug in his guitar  at Newport and change the face of American popular music. In this 1965 recording, he warns that same audience that would call him Judas a year later that it was indeed, if they had ears to hear, all changing with the performance of the song that concluded his landmark album, Bringing it All Back Home.

Here's It's All Over Now, Baby Blue:

Leave your stepping stones behind, something calls for you.
Forget the dead you've left, they will not follow you.
The vagabond who's rapping at your door
Is standing in the clothes that you once wore.
Strike another match, go start anew
And it's all over now, Baby Blue.

I had totally forgotten about the I Don't Believe You song ... I played it a lot in college, but not since.

I like that versions of It's All Over Now, Baby Blue, because of the tentative start ... it makes Bob seem more human ... more vulnerable, I mean.