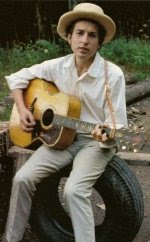 Price? $30,000. The reported sale does not include the rights to actually release the recordings. From here.

An original master recording of outtakes from Bob Dylan's Nashville Skyline sessions has apparently sold on eBay for $30,000. The tape was offered by a consortium of Ampersand Records USA, Lake Carmel Music and Navybob LLC. The auction was for the recording itself -- not the intellectual rights that would allow it to be commercially released. The one-inch, eight-track analog tape runs for 27 minutes and includes five outtakes of Dylan's hit, "Lay Lady Lay," and an unreleased jam session of "Going Back to Chicago." The recording was made on Feb. 14, 1969 at the Columbia Studio on Nashville's Music Row and has been stored in a New Jersey warehouse for almost 18 years.

LATER: This recording is from six years earlier (only six years - but it seems like a lifetime) but it just went up on YouTube and it's quite excellent so, here we are for some tunes on this late December night. Dylan's love for the blues starts real early. It's not hard to understand, really, why people collect Dylan bootlegs - they are often superior to his official Columbia recordings. This bootleg recording of Smokestack Lightning is from 1962:

Incidentally, Dylan is deeply indebted to Charley Patton as well and pays him homage in one of his great songs off the 2001 Love and Theft (which was interestingly enough released on September 11, 2o01) and gets a lot of air play here at the Cafe - a lot of air play, High Water:

High water risin', the shacks are slidin' down
Folks lose their possessions - folks are leaving town
Bertha Mason shook it - broke it
Then she hung it on a wall
Says, "You're dancin' with whom they tell you to
Or you don't dance at all."
It's tough out there
High water everywhere

And so let's end as we began, with the Nashville Skyline album (the official recorded one, that is). Here is I Threw It All Away, and yes, it's Bob Dylan too, such a joker - and a thief (those are his words). Guess that's why he doesn't get so worked up over the bootlegs after all these years. The birth of his own album collection is just as dubious, as we learn in Martin Scorsese's documentary No Direction Home. Dylan calls himself a "musical expeditionary." But the guy with the bowling pin called him a thief.

In fact, Dylan offers his own tribute to his bootleggers too. Surprised? Jo Rowling take note. He released this video this past September. The song is off the latest release of his bootleg series, Tell Tale Signs, called Dreamin' of You. It was a discarded song from his 1997 album Time Out of Mind. It's not hard to see the theme of the song runs close to Not Dark Yet (the song that started it all) - but never saw the light of day (officially that is) until two months ago. See why people trade bootlegs?
Posted by Unknown at 10:52 AM

Babyblue, what's with the obsession with Bob Dylan? Surely there must be other issues worth reporting!

Anon, you do know where you are, right? Or did you think this was the cafe across the river?

$30,000 for Nashville Skyline outtakes?
Oh me oh my!
Love that country pie!

Thanks, especially for the Dreamin' of you link. I hadn't seen that.

I'm a fan of Harry Dean Stanton (he was Asa Hawks in John Huston's film version of Flannery O'Connor's Wise Blood, for example), and the song is great.

I love how one person asks in the YouTube comments how he can download the video to his computer. Funny!

Anyhow, keep the Dylan stuff coming. I'm too lazy to hunt it down on my own, but I always love when you post on Dylan.

Also, was listening the "The" song (It's All Over Now ...) the other day, by the 13th Floor Elevators (1960s psychedelic band from Austin, Texas). Great stuff.

Thanks, Beach, er Paul! ;-) It's fun finding the Dylan fans coming out of the woodwork. We're every where - and it doesn't matter party, creed, or affiliation. We're every where, which is a tribute to Dylan. The Boss could learn a few things from him. As apparently he knows.