New Anglican province comes into being in United States and Canada 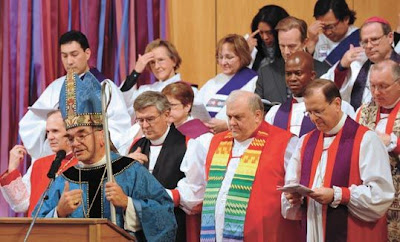 From the Church Times.

THE NEW Anglican province in North America proposed by a coali­tion of conservative Anglican groups in the United States and Canada published its draft constitu­tion and canons in Wheaton, Illi­nois, last week (News, 28 November).

The Anglican Church in North America (ACNA), formed by the Common Cause Partnership, says it has 700 congregations and about 100,000 members. It “will seek to represent orthodox North Amer­icans in the councils of the Anglican Communion”. It will have an Arch­bishop — initially the Rt Revd Bob Duncan, former Bishop of Pitts­burgh, and the Moderator of Com­mon Cause.

At a press conference on Wednes­day of last week in Wheaton, Bishop Duncan told the gathering: “The Lord is displacing the Episco­pal Church.”

In the new provincial structure, congregations and clergy are related together “in a diocese, cluster, or network, whether regional or affinity-based, united by a bishop”. These are defined in the canons as consisting of a minimum of 12 congregations with an Average Sunday Attendance (ASA) of at least 50 each, and a collective ASA of at least 1000. They choose which bishop they want to be under: “A duly ordained male presbyter of at least 35 years of age.”

The canons do not curtail the free­dom of member groups to con­tinue ordaining women as deacons or priests if that has been their practice. Bishop Duncan told the press conference: “Scripture is unclear” on the subject.

The leadership of the Common Cause Partnership declared in a press release that it had “begun forming the new Church in response to a request from the Primates . . . of the Global Anglican Future Con­ference [GAFCON] in Jerusalem last summer”. Those Archbishops — of Nigeria, Rwanda, Kenya, Uganda, and the Presiding Bishop of the Southern Cone — said after a council meeting in London last week that North Ameri­can Anglicans had been “tragically divided since 2003”.

Lambeth Palace responded to the announced by stating that there were “clear guidelines” for new provinces. A legislative process to form a new province, which would be under­taken by the Anglican Consultative Council (ACC), would take years, and had not yet begun. Bishop Duncan’s spokesman, the Revd Peter Frank, told The New York Times: “This is not being put on hold while we wait for a committee in England to tell us which form to fill out.”

The Rt Revd Martyn Minns, a bishop for the Convocation of Anglicans in North America, told the paper: “One of the questions a number of the Primates are asking is, why do we still need to be opera­ting under the rules of an English charity, which is what the ACC does? Why is England still considered the centre of the universe?”

At the time of going to press, there had been no official response from the Epicopal Church in the US. But the Revd Charles Robertson, Canon to the Presiding Bishop, Dr Katharine Jefferts Schori, said before the new Church was announced: “We will not predict what will or will not come out of this meeting, but simply continue to be clear that the Episcopal Church, along with the Anglican Church of Canada and La Iglesia Anglicana de Mexico, com­prise the official, recognised presence of the Anglican Commu­nion in North America.”

He went on: “We reiterate what has been true of Anglicanism for centuries: that there is room within the Episcopal Church for people with different views.”

Dr Williams met the five GAFCON Primates last Friday, at their request. They made no com­ment after the meeting, and have issued no statement.