Washington Post/Newsweek: A New Start for the Anglican Church in North America 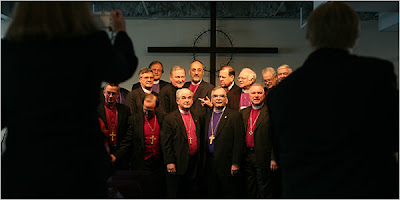 From On Faith for The Washington Post/Newsweek by the Rt. Rev'd Martyn Minns, Bishop of CANA:

Once upon a time, the Anglican Church was a powerful presence in the U.S.A. known as the Protestant Episcopal Church in the U.S.A. or more recently as The Episcopal Church. It claimed a large percentage of the population (16% in 1789) and an even larger representation among the leaders of our great nation.

The language of its liturgy shaped much of our culture and its cathedrals and churches were a witness to the community. Today however, it is wracked with internal conflict, shrinking numbers (less than three-tenths of one percent of Americans regularly worship in Episcopal Churches) and is known more for its rejection of biblical authority and its willingness to litigate against its own clergy and congregations than for its passion for Christ. But that isn't the end of the story.

A growing number of Anglican Christians have realized that they cannot continue down this path. On December 3, as the Bishop of CANA (the Convocation of Anglicans in North America) I joined the bishops and representatives of 14 other Anglican dioceses and networks to introduce the provisional constitution of a new Anglican Church in North America.

We are making a new start. This new Church already represents more than 700 congregations across the nation with a diverse leadership that is committed to the centrality of Christ and the trustworthiness of the Bible as we seek to live out our faith in an authentic way. We are convinced that our Anglican heritage with its balance of Word and Sacrament, historical roots and present day concerns, has a great deal to offer to the challenges of our contemporary culture.

We believe that we have very good news to share with those who are struggling with personal and corporate brokenness. We also know of the transforming power of the Gospel from our own personal experiences. We are passionate about mission both in our immediate communities and around the world.

We are planting new churches in urban centers and in rural settings. We are working in homeless shelters. We are working to strengthen marriages and protecting children at risk. We are fighting HIV/AIDS and other pandemics in the Majority World. We are moving forward with Jesus' ministry of radical inclusion, profound transformation and inspired service. We believe that lively Christian communities are one of the best ways to strengthen the foundations of a just society.

We have already received great encouragement from Anglican leaders around the world who have welcomed and blessed this new development. Earlier this year, leaders representing more than half of the world's 77 million Anglicans called for the creation of this new Anglican Church in North America during the June 2008 Global Anglican Future Conference held in Jerusalem.

We are not looking back to the good old days of power, privilege and prestige, but looking forward to a bright new tomorrow. We believe that the message of the angel heard in those Bethlehem fields more than 2,000 years ago is still true. We have good news of great joy for all people!

The Rt. Rev. Martyn Minns is Missionary Bishop of the Convocation of Anglicans in North America.
Posted by Unknown at 11:53 AM