Nicky Gumbel on the meaning of life 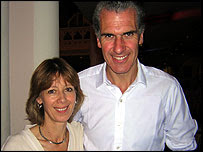 BB NOTE: I first met Nicky and Pippa Gumbel fourteen years ago during a sabbatical in London. Two years later I was as an Alpha Regional Advisor as the Alpha Course began in the United States. There was so much about Alpha's style that reminded me of my own conversion in a coffeehouse outreach in San Diego in 1974-75 when I was a rather precocious young teenager.

As I became acquainted with the Alpha Course, attending my first course at Holy Trinity Brompton, London, with my uncle in 1994, it reminded me so much of the outreach of my early days at the coffeehouse. I was never one for the Four Spiritual Laws (as a fourth-generation Christian Scientist I didn't even agree on the definitions of the words, nevermind the theological concepts - there wasn't even a common starting place). The Alpha Course reminded me so much of the way of those days in Southern California when the Jesus Movement was at its height, only the clothes were better. It was about music and worship and fellowship and great biblical teaching and a place to ask the deep questions of life and have lots of fun. That was the coffeehouse - and that was Alpha.

Nicky and the Alpha Course were profiled this past weekend in the Independent. Here's a excerpt from the article: 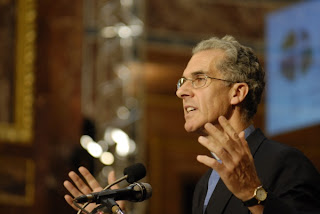 The structure is laid-back, and runs on a similar format, whether you are taking part in a course catering to hundreds of people – like Gumbel's own course, run out of Holy Trinity – or just a handful – like the one I'm on, which takes place in the living room of a Pastor whose son is a friend of my son. Everyone has dinner, then one of the teachers talks for half-an-hour about that evening's Gumbel-prescribed topic. Afterwards, there is a discussion, shaped by the leading questions of the teacher, who – in my case anyway – is totally untroubled by robust rebuttal.

Yet despite its seemingly free-wheeling nature, the Alpha Course sticks to a tight internal logic. There is no need to explain the existence of God, because nothing explains the story of Christ and his teachings, except the explanation that Christ himself gave, that he was the Son of God. Accept that, and then logic dictates that you accept everything. 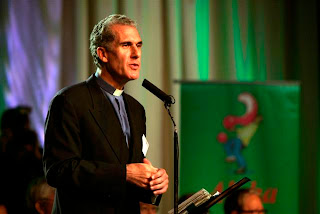 There is heavy reliance on C S Lewis's argument, that there are only three possible ways to explain Christ's life, death, resurrection and fulfilment of prophecy – that he was mad, that he was bad, or that he was who he claimed to be. Christians believe that he could not have been mad or bad, because his teachings made – and make – such good moral sense that they have never been surpassed. So there's only one option left.

Gumbel looks both irritated and incredulous, and neither emotion appears to diminish when I suggest that Dawkins is simply displaying a reasonable respect for the status of Christ as a genuine historical figure of immense importance and stature.

"Well, I think he has a respect for Jesus, which is a good thing. But I think the argument that there's another category is a false argument. If we came across someone out there who honestly believed they were God, we would say: 'You're deluded!' 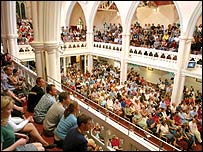 "You can't prove that Jesus is the Son of God. You can't do a mathematical proof, or a philosophical proof, or a scientific proof. But it's more akin to the kind of evidence that I was used to as a lawyer. The evidence you put before a jury is historical evidence, the jurors weren't there, but they listen to witnesses. It's recent history, but the jury has to make up their minds whether they believe that person, or not. That's a step of faith. You can't prove things in a scientific or mathematic way."

Or beyond reasonable doubt?

"Well, they've dropped that now, so it's satisfied so that you feel sure. But you have to look at the evidence and make up your mind, and I think it's the same with the Christian faith. It doesn't force you to believe. Where I part company with that line of argument, whether it's with Richard Dawkins or with anyone else, is where it says that all faith is irrational. I don't think faith is irrational. I think faith is based on reason and there's good reason to believe."

I find his praise for the ABC hard to understand....given the ABC's record in the AC in the last 5 years and still continuing refusal to insist that TECUSA does not condone behaviour which is "incompatible with scripture"....but Nicky thinks the ABC is very "spiritual"... not sure about that when the ABC has himself knowingly ordained a man in a lifestyle "incompatible with scripture". The Dalai Lama is "spiritual", I guess, but I don't want him as my bishop either....

Notice how quiet HTB is re supporting the faithful in TECUSA and taking on false teaching....it is a shame that they do not take a public stand - Reform and AM take all the heat in the CofE for standing up for biblical authority.... if this is so "liberals" use Alpha, it is a mistaken strategy as they will redefine Alpha to mean nothing anyway....and it does matter to stand up for biblical authority when it is under threat from within.

I think Christianity Explored is a much clearer course in terms of key gospel content.... in terms of how to run a course and genuine concern for the lost, Alpha is great and Alpha leaders are great, but the content is somewhat light on sin and the cross (which are quite important really!) I recommend you have a look at this course:

Neil T. Anderson wrote a course called Beta, that takes a person into the Christian world and work beyond Alpha, preparation for fruit-bearing and harvest, ministry and mission...including spiritual warfare, healing, deliverance from evil that may have come through generations, childhood wounds, self-inflicted wounds from sinful choices.

This is a much-neglected area of discipleship...some churches never deal with the cause of pain and dysfunction and so many Christians are still held in the grip of compulsive sinful behaviors and addictions.
One study in 2005 showed there was no difference in statistics between churched and unchurched in abuse (spouse/child sexual, physical, emotional abuse), addiction (substance, relationship and behavior)and adultery.

The Church needs to clean the catch before confirmation.

One of our greatest challenges in sharing the Good News of Jesus Christ is caring enough to know, really know, those who are asking the questions - and they are asking questions. Some ask questions boldly, there's actually a question mark at the end of their sentences. But most ask their questions in other ways - not just by what they say, but by what they do. The lives scream out their question marks. Do we see this or do we turn away?

In order to hear their questions, we must take the time to know them - really need to get to know them, as individuals, to listen, to laugh, to care. Nicky speaks the language of those he is in relationship with - those who are seeking, those who are coming to Alpha Courses, his own kids, parishioners, the visitors, and others in the larger circles of his life, including Rowan Williams - who is far more of a friend than any of us could have ever dreamed, if we have ears to hear him.

Oh, I have dreamed of more faithful friends, BB.....
-friends who would not have given Lambeth invitations to TECUSA bishops, rewarding them for tearing the fabric of the Communion in 2003 despite the consequence of hundreds of faithful bishops not coming to Lambeth,
-friends who implemented the Windsor Report years ago...rather than delaying action forever for the sake of institutional unity and giving us mock indabas which differ crucially from what goes on in Africa in that there they have the sense to come to decisions and stick to them in their communities,
-friends who do not conduct secret eucharists in London for clergy who practise and promote behaviour which is "incompatible with scripture"....

I have dreamed of a more faithful friend in Lambeth Palace, BB....