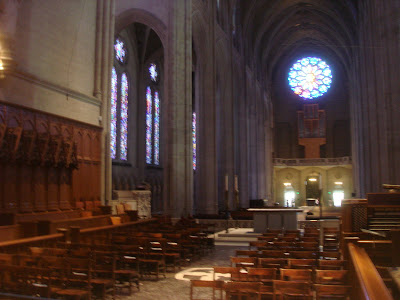 The schism is the break-up of the American Episcopal Church, which is in communion with the Church of England. Traditional dioceses and individual parishes, including 21 in Virginia, had separated under the auspices of a provincial arm of the more orthodox Nigerian Anglicans and other African dioceses. Now, they and some Canadian parishes, are poised to form their own authority, the Anglican Church in North America (see AP article here), with their own bishops.

Although the Mainstream Media portrays this as “conservatives leaving the church,” and although it is the “conservatives” who are doing the physical separation, this, rather, is the classic, “We didn’t leave them, they left us,” syndrome, for the Episcopal Church for decades has drifted irreproachably into nothingness. Despite its creep into irrelevancy by condoning homosexuality and other doctrines only recently considered heretical, the “conservatives” gave the Episcopal Church every chance at reconciliation. But the ordination of an openly homosexual bishop living with his “partner” was the last straw.

What makes this all the more relevant to Virginia is that the Episcopal Diocese of Virginia (or the remnant thereof) is the successor to the Anglican Church set up by the Jamestown colonists. The Rev. Robert Hunt, the chaplain of the colony, would not recognize his church today. With good reason — and it’s not just about openly homosexual clergy, flouting the Word of God. That is only a symptom of the problem; the problem being irrelevency through its moral, scriptural and theological relativity.

This is what one of the Virginia diocese’s most respected leaders, the Rev. Canon Robert G. Hetherington, the retired rector of historic St. Paul’s Episcopal Church in Richmond (which sits across the street from the capitol, known as the “Cathedral of the Confederacy”), told the Richmond Times-Dispatch last week (see article here; read the reader post after the article by an orthodox Episcopal priest):

In my view, the great thing about the Episcopal Church is we’re not a doctrinal church. You’re not a member based on some narrow set of beliefs. It’s a place where divergent views can be expressed and held and you’re still part of the same body. (Emphasis added.)

So, exactly why did this man get ordained? Does he not think it matters that a body of faith believe in something? Is it okay for Episcopals to accept into their church people who do not believe Jesus was the Christ, but rather a really cool dude who told some really impressive parables? It cannot be a body of Christ. For what is a church if not a body that shares a foundational understanding, a common belief and an accepted faith? Otherwise, the Rev. Canon Hetherington simply is running a community center — come join the club and socialize, ladies and gents!

There are plenty of social and networking organizations and clubs, many of which also do good work in their communities. You don’t have to believe in a doctrine to join them, only a desire to make friends, have fun and perform a perfunctory community service project (although some probably have more adherence to principles than, apparently, the Episcopal leadership). In other words, why go to church if not for doctrine? How can you be in communion with each other if there is no commonality, a sense of spiritual purpose? It was the Church of England, after all, which gave us the Book of Common Prayer.

BB -- please be careful of suggesting that our common life is based on the Book of Common Prayer. Not that you were, I understand ... you were stating that we are a church of doctrines. I agree. One of my favorite books is the 1922 Report from the Doctrinal Commission of the COE which states very nicely the place of dopctrine and what we believe as a church. We haven't done a lot of those since 1922 ...

Reason for the concern? Ever since the 1979 revision went through I have heard it said (in church, at seminary, etc) that what holds us together is not common thought or doctrine, but common prayer. No doubt you have heard this silly bit before too. Since theological thinking was shunned at seminary in the 1980's in favor of liberation theology and proactive missions to save the world there was little foundation on which to argue the point back then. Too bad.

Though argue it today we should. Politely and rightly.

One of the oldest teachings of the church is stated "Lex orandi, lex credendi" meaning "as the church prays, so she believes." This law of the church should seem rather basic, but it often gets overlooked. For instance, those fine people who helped put together the ICET texts in the 70's were interested in finding common language that everyone could accept for things like the Lord's Prayer, Canticles, etc. Only the folk making up the Commission lacked any theological weight. From the documents they gave us to explain decisions about wordings, they admit to neglecting theological discussions in favor of pastoral concerns, or eccumenical questions, or grammatical constructions. Case in point: look at the new wording of the Lord's Prayer in the 79 Prayer Book and you find something unsupported by translators or theologians. It's amazingly bad, but good at introducing some very odd ideas.

In any case, (and not that you were headed down this path Mary) I'm suggesting that when any of us hear someone mouthing the dictum that it is the Book of Common Prayer that holds us together because we do not have settled doctrines ... we need to speak up and call their bluff. They may not know any better or realize how idiotic the statemnt is.

If you are what you eat, it's also clear that a church is what it prays. Prayer describes doctrine clearly.

Otherwise why would so many of those suggesting theological revisions be so hot on creating new liturgies for blessing this or commemorating that and praying for the other?

And since we are what we pray, how about a prayer today for the unity of the church. May I suggest the ones on page 280 of the BCP? My suggestion for what's really needed these days.

Blessings for a holy advent.

Actually, I didn't write this commentary - the original article is here: http://www.familyfoundationblog.com/?p=614