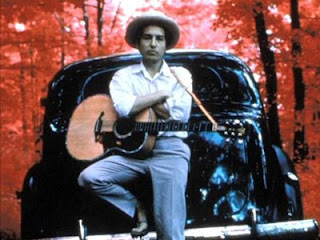 By Bland Simpson. From here, excerpt below:

About 20 minutes went by before a thin man in his 30s came striding up the paved road. He would have walked right past me, but I spoke up:

"Excuse me, do you know which one of these driveways goes to Bob Dylan's house?"

"This one." He pointed at the one he was starting down.

"Thanks." I fell in beside him, and we walked 50 yards or so before either of us spoke again.

That was discouraging, but what could I do? Go back to the bakery and telephone for an appointment? "I've come from North Carolina," I announced.

"Oh." He gave up, and we kept walking. A few hundred yards into the woods the road forked, and he pointed toward a long low building of dark logs that looked like a lodge. "That's Bob's house." Then he disappeared down the other fork.

In the driveway at Bob's house were a "66 powder-blue Mustang and a boxy 1940 something-or-other with the hood up. Two men, one of them small and weedy, the other bulky and bearded, were working on the engine. I stomped up in my snakeproof boots, but neither of them looked up. After a minute or two staring over their shoulders at the old engine, I finally said, quite familiarly, "Bob around?" The weedy man didn't respond, but the big fellow gave a head-point at the log lodge and said, "Yeah."

Sara Dylan answered the door, gave me a blank look, and closed the door. About two minutes later Bob Dylan himself appeared and stepped out onto the small porched entry. He wore blue jeans, a white shirt buttoned all the way up and a black leather vest, and he was very friendly and relaxed.

"Bland. What kind of name is that?"

A family name, I said. Then just to make sure he'd heard me right, he asked me to spell it.

"Bland. Well, I sure won't forget that." He talked in person just like he sounded on record in "The Ballad of Frankie Lee and Judas Priest."

I agreed, but I wanted to meet him, shake his hand, tell him I admired his work, that I wanted to write songs myself.

"What did you want to do before you got this idea about writing songs?"

"I was going to go to law school."

"Well," he said, more serious than not, "country's gonna need a lot of good lawyers. Maybe you ought to keep thinking "bout that."

This wasn't what I had traveled hundreds of miles to hear. I started asking questions. Did he live in Woodstock all the time? Most of the time, he said, but he was thinking about moving to New Orleans. When would he have a new record out? In the spring -- "I'm real happy with this one."

He was talking about Nashville Skyline, which he had just finished. I asked about a song of his the Byrds had recorded, a song I'd heard out in Wyoming the summer before. "Yeah, I know the one you mean, but I can't call the name of it right now -- it's in there somewhere." The song was the riddle-round "You Ain't Going Nowhere."

We talked along like that for almost 45 minutes, during which time I felt the cold acutely. Dylan was dressed in shirtsleeves, but he didn't seem to notice the cold at all. He must have known my head was full of hero-worship, and he was kind enough to let my time with him be unhurried. The moment of my mission played out as naturally as the tide. I was immensely grateful, am grateful yet.

The pilgrim was ready to go home. I pulled my map out, unfolded it, and while we talked about what the best way to head back south was, the bulky fellow lumbered over from the old car where he and the weedy man had been working all the time. The mechanic ignored me, and I ignored him right back, which was easy enough: I had the entire eastern United States spread out in front of me. My mind was on the road, but I did want one last word with Bob Dylan. He gave Dylan a report on all the things that weren't wrong with the car, then said: "I think we can get it started if we hook it up to the battery charger."

"I got it already, and tried to hook it up, but even with that long cord it won't reach. We need another extension cord."

"Extension cord," Dylan said, and looked past the big man at the old car. He thought about the request for a few moments, then shook his head.

Bland Simpson, teaches creative writing at UNC-Chapel Hill. His most recent work is Ghost Ship of the Diamond Shoals. "Christmas With Dylan" is currently included in the anthology 12 Christmas Stories by North Carolina Writers from Down Home Press. Read it all here.