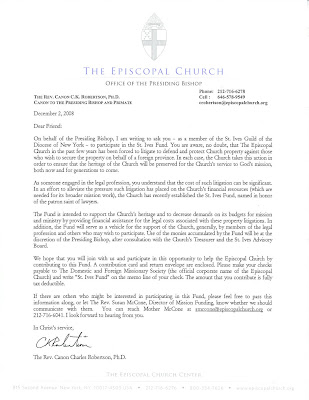 From here at SF or click the graphic above for some interesting holiday reading.

Somethings we can't even imagine - and then we're standing at a post-Sunday services gathering this afternoon and hearing over the punch and cookies that The Episcopal Church has created - youbetcha - a euphemistically-named "mission fund" charted to raise more money for the Presiding Bishop to sue yet even more people. Lovely, isn't it?

They've gone and named the so-called "mission fund" after a saint (as though that might help hide the fact of what this fund is really all about). And then if you do want to go ahead and pay up (makes a lovely Christmas gift, don't you think, sitting there under the tree?), just drop a line to someone called "Mother McCone" or as she's known in these parts, "Ma McCone." She runs the "mission funds" at the 815 HQ of The Episcopal Church in Manhattan and would be pleased to part you from your cash so Katharine Jefferts Schori and David Booth Beers can keep those lawsuits coming. Come on down!

Who was St. Ives? As we mentioned, St. Ives - or St. Ivo - is indeed best known as the patron saint of lawyers. Wiki reports that on his tomb at Tréguier was supposedly inscribed in Latin: Sanctus Ivo erat Brito/ Advocatus et non latro/ Res miranda populo. Roughly translated, this means: "St Ives was Breton/ A lawyer and not a thief/ Marvelous thing to the people." Wiki reports that "literally translated, it is a quip that refers to the fact that lawyers have a reputation for thievery." Enough said there. But if you want to see what St. Ives looked like, check out his skull on display (here in process procession at the gate of Tréguier's cathedral in 2005). Just puts you in the giving spirit, doesn't it?

In fact, according to Catholic Online, St. Ives/Ivo was a counselor to King Philip and "attacked the greed of contemporary churchmen. He was imprisoned for a time for opposing Philip's plan in 1092 to desert his wife Bertha and marry Bertrade of Anjou. Ivo played a prominent role in the investiture dispute advocating a policy of moderation for both sides and wrote widely on canon law." Not sure he'd like to lend his name to an American-based tax-deductible "Mission Fund" charted not to feed the poor but to sue other Christians. Perhaps as remedy to all this faux cheer ("sue early, sue often and get a tax deduction") it's time for the annual viewing of the centerpiece of every Christmastide, Charles Dicken's classic, A Christmas Carol.

Here's the entire 1951 film version, staring Alastair Sim. Who knows, perhaps it will help us remember the real point of church "mission funds" - especially this season - and why we still remember St. Ives - and Mr. Scrooge. God bless us, every one.
Posted by Unknown at 3:35 PM

Hmmmmm, wonder if there is anything here that might run afoul of the tax code. Can contributions made specifically to finance lawsuits be considered charitable giving?
Just Wondering....