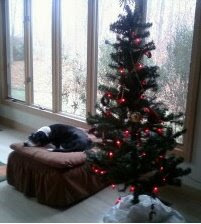 DATELINE HARRISONBURG - Woke up this morning in Harrisonburg. Virginia. Down I-81 South. Family gathered for smoked turkey and present-opening for Christmas and I decided to pause and enjoy an extra day off here at the home of My Brother the Mortgage Banker. He's attempting to explain the Global Financial Crisis (GFC) to me as we watch a marathon of James Bond films. 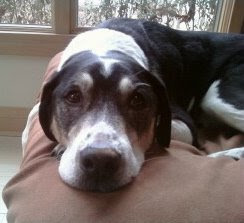 The photo is of Tucker, the Resident Top Dog here this Christmas. He's enjoying his post-Christmas reflections by the Christmas Tree (which incidentally is adorned with "chili-pepper" lights reflecting on My Brother the Mortgage Banker and his wife The Professor's former home in Sante Fe, New Mexico) while waiting for New Year's and, of course, more turkey.

In addition to Tucker, we also have in residence a Foster Dog. The Professor volunteers at the local shelter and we have a very happy collie who has been joining us for the Bond Marathon. 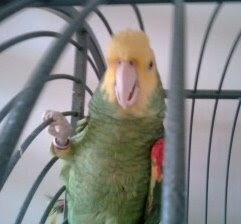 There are also two lively parrots - one is very talkative and when the phone rungs we can hear him in the next room calling out "Hello? Hello?" And then he calls out for my brother by name, sounding just like The Professor. I kid you not. I find it quite amusing, but alas, my brother is not so amused as he fixes us all a hot Southern breakfast in the kitchen. He's had to hear it for fourteen years.

It's amazing to be able to drive two hours and be in a such a different world than what we know in Washington, D.C. It's so still and quiet - we're actually about five miles outside of downtown Harrisonburg. "Harrisonburg, previously known as Rocktown, is named for Thomas Harrison, a son of English settlers," says Wiki. 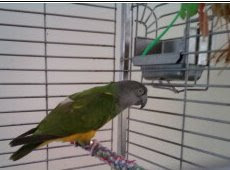 "In 1737, Harrison settled in the Shenandoah Valley," Wiki continues, "eventually laying claim to over 12,000 acres. In 1779, Harrison deeded two and a half acres of his land to the "public good" for the construction of a courthouse. In 1780, Harrison deeded an additional 50 acres. In 1849, trustees chartered a mayor-council form of government, although Harrisonburg was not officially incorporated as an independent city until 1916."

The city's website says this about their history, "War came to the valley and to Harrisonburg between 1861 and 1864. The city was passed through by both Union and Confederate troops. On June 20th 1862 the fence around the courthouse was used as a stockade to hold Union soldiers taken prisoner in the Battle of Cross Keys. The war was a tense time in the city. Turner Ashby, a noted Calvary officer was killed close to the town’s borders. While Harrisonburg and Virginia were part of the Confederacy the City of Harrisonburg’s representatives in Richmond opposed secession. "

It's hard to be in Virginia for long and not run across evidence of the wars that have been fought here. This is a land where much blood has been shed, which is one of the major reasons why the Division Statute was instituted in the first place. It was a post-Civil War response to find a non-contentious, non-litigious way to settle disputes that would put people off the battlefield of institutional conflict and onto a path of peace. It was embraced by a war-weary people who had known much suffering and division, even here in Harrisonburg. It paved the way for peace.

It is so peaceful here in the Shenandoah Valley that's it's difficult to imagine such a time, except that it's here on other fronts today - as we all know.

On this quiet Friday morning the day after Christmas, with the dogs passing through and the birds calling out and the smell of breakfast and coffee filling the air, do we remember that even 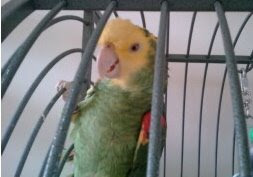 with the "cares and occupations of this life" - we can still have hope? I think of the call of Bishop David Bena to Bishop Lee and Bishop Schori and the possibilities of peace. Is such a thing possible? Even now?

And from the next room I hear the parrot call, "Hello? Hello?"
Posted by Unknown at 9:47 AM

Have a very Merry Christmas! (it's before Epiphany, I can get away with it ... at least my dear friend from Cantonville, VA reminds me that Christmas is a season, as she sends possibly maybe latent card).

Glad to see you comments, BB - - I was born/raised and moved back here in 1985. (OK, so it was a "bit" of a run to Truro every Friday night/Sunday Morning for several years, but I don't know of any other place I'd rather be!