A Call to Prayer: Final Ruling for Virginia Churches that voted to separate from The Episcopal Diocese of Virginia expected this Friday

From the office of the Anglican District of Virginia:

We have received word from Judge Bellows' clerk that he will issue his Letter Opinion this Friday December 19. Please pray over the next several days especially for Judge Bellows and the congregations that will be affected by the rulings that Judge Bellows will issue. 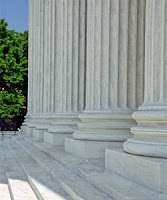 UPDATE: As we have all ready been repeatedly told even before the final judgment is entered, The Episcopal Church intends to march on the litigation front and appeal to the Commonwealth of Virginia's Supreme Court - however Judge Bellows rules tomorrow.

Here's what we may expect after Judge Randy Bellow's issues his ruling:

These are the latest possible dates - the filings could be made earlier, which would move subsequent deadlines up. The petition for appeal would probably be set for oral argument at one of the following Writ Panels:

If the petition for appeal is granted, oral argument could be as early as September 2009 - or sometime after. Whatever the case, it will be after General Convention 2009.

Tip of the Tinfoil to Mr. Intrepid, Esq.
Posted by Unknown at 12:35 PM

Y'all are in our prayers.

Of course!!! It is the very least (yet the most profound and important) thing I can do for all of you.

Almighty God, who sittest in the throne judging right: We humbly beseech thee to bless the courts of justice and the magistrates in all this land; and give unto them the spirit of wisdom and understanding, that they may discern the truth, and impartially administer the law in the fear of thee alone; through him who shall come to be our Judge, thy Son our Savior Jesus Christ. Amen. (BCP p. 821)