"And your bishop wears army boots!" 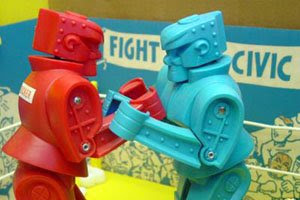 The saga of the battling bishops of Jerusalem opened a new chapter on Dec 13, with new accusations of misconduct exchanged between the former Bishop, the Rt. Rev Riah Abu al-Assal and the current Bishop, the Rt. Rev. Suheil Dawani.

Last week The Church of England Newspaper reported that an altercation between Bishop al-Assal’s wife and staffers at the diocesan headquarters prompted police intervention. Mrs. al-Assal charged that she had been assaulted and distributed photographs purporting to document her injuries. The diocese hotly denied the assault allegations, and claimed it had been Mrs. al-Assal who had instigated the violence.

Following publication of news of the melee in the church press, on Dec 13 the diocese and Bishop Riah issued further statements. The former bishop reported that his wife was under doctors’ care as a result of the fracas. “I am sorry to inform you that she was advised to consult with a psychiatrist because of the trauma she is going through these days,” he said.

He thanked supporters for their prayers and encouragement as their “gracious words served like ointment on the bruises she had on her cheeks and neck.”

However, these bruises were self-inflicted, the diocese charged in separate press statement that same day. On Dec 13 the Diocese in Jerusalem said the incident had been sparked by Mrs. al-Assal’s request that her husband receive an advance payment on his pension. Informed that a second pension check would require two signatures and would be prepared within the week, the diocese said Mrs. al-Assal reacted badly.

Perturbed by news of the delay, Mrs. al-Assal “overturned the Christmas tree, pulled the painting of Bishop Dawani off the wall adjacent to the decorated tree, threw vases and glassware against the walls and floor, and disrupted the furnishings of the Bishop’s House reception hall.”

BB, I couldn't resist this; but whenever a person of gender seems to lose-it I always turn to the Guess Who. http://www.youtube.com/watch?v=VLMF5GM0Kt8